In the weeks and days before 11 November each year, millions of Canadians sprout red poppies on their lapels. After the Armistice of the “War to End All Wars” the Royal British Legion and the Royal Canadian Legion adopted the red poppy in 1921 as a symbol of collective remembrance. How many other countries embrace this symbol so wholeheartedly and publicly?

Many of us are familiar with the words of the famous poem In Flanders Field. In 1915 then-Major John McCrae was the exhausted Brigade Surgeon serving with the First Brigade of the Canadian Forces Artillery in the Flanders area of Belgium. Some of the worst fighting and casualties of the war occurred there at Ypres. A weary McCrae paused while patching wounded soldiers and burying the dead to write some immortal words:

In Flanders fields, the poppies blow
Between the crosses, row on row,
That mark our place; and in the sky
The larks still bravely singing, fly
Scarce heard amid the guns below.

Every year I am deeply touched by his words. For some time I lived on the same street where John McCrae was born, in the city of Guelph, Ontario. McCrae House is a National Historic Site—the family stone cottage is a small civic museum to honour him: http://guelph.ca/museum/. Because my father was in the First World War, I wanted to see if I could learn something new ... and I did. It is said that at least since Napoleonic times, perhaps earlier, scarlet poppy flowers mark the blood of battlefield victims.
Photograph from Veterans Affairs Canada, www.vac-acc.gc.ca.

We are the dead. Short days ago
We lived, felt dawn, saw sunset glow,
Loved, and were loved, and now we lie
In Flanders fields.

Flanders was apparently not noted for a poppy presence in the early twentieth century. However, many sources repeat the same information—in the First World War the countryside became so devastated from continual artillery bombardment and rubble, the soil was infused with lime, creating fertile conditions for papaver rhoes. Certainly the blooms were in full flower in May 1915 when McCrae was a witness.

Canada also remembers its veterans in many other ways. Services are held on November 11th at cenotaphs in every city and town across the land. Anyone can visit the beautiful national Books of Remembrance online at: www.vac-acc.gc.ca/remembers. Donations for wearing the poppy are held in trust accounts to provide for the needs of service veterans and their families.

McCrae’s haunting words endure through the years with visual and emotional impact. They affect soldiers, veterans and civilians alike. He was buried with full military honours in the Commonwealth section of Wimereux Cemetery in France, the location of wartime British hospital services.

Take up our quarrel with the foe:
To you from failing hands we throw
The torch, be yours to hold it high.
If ye break faith with us who die
We shall not sleep, though poppies grow
In Flanders fields.
Posted by BDM at 21:14 2 comments: 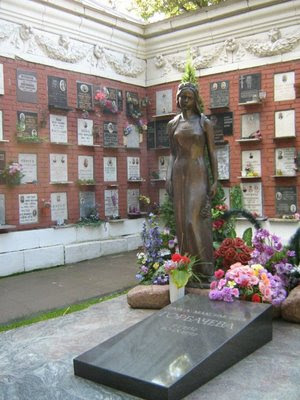 Regarding my post on 1 July 2008, Stalin’s Ghost by Martin Cruz Smith finally came my way. Senior Investigator Arkady Renko is weaving his determined way through Moscow’s strange under classes. The case he is given to solve exposes deeper and more sinister roots. Even his police colleagues, veterans of the Chechen war, are suspect. The “ghost” is a not-so-subtle allegory for the nostalgia of some Russians for the days of Uncle Joe. Renko has his own family ghosts in that same past. His private life is also suffering problems we don’t want him to have.

Falling out of favour–again–with his corrupt superiors, Renko wastes no time following threads of his mystery to the city of Tver. Here, the Diggers were an eye-opener for me. The slow, painstaking exhumation of Second World War soldiers on a huge battlefield site is undertaken by both the altruistic and the greedy. Red Diggers are the volunteers who restore bones for dignified burial and make identification if possible. The Black Diggers profit from selling recovered artifacts and weapons. [Stalin’s Ghost does not mention that Moscow entrepreneurs on the Internet advertise tours to the macabre site for “collectors” and “privet (sic) relic hunting excursions.”]

The book and the hero seemed to have a slightly more than usual jaundiced view of Russian subcurrents, in my opinion. Nonetheless, the plot has increasingly complicated layers and we cheer Renko’s survival ... to appear another time, one hopes, uncontaminated by his surroundings.

Sad Postscript:
A reader informs me that Donald James Wheal died in April of this year. The author of Monstrum, The Fortune Teller and Vadim is no more. I feel stricken with loss. So long, Constantin, fare thee well.
Posted by BDM at 00:04 No comments: