Book Review: In the Land of Long Fingernails

Fellow brave hearts and lovers of black humour, listen up. I know you, as well, appreciate literary excellence. Hustle off to your library or bookstore to find Charles Wilkins’ In the Land of Long Fingernails: A Memoir (Toronto: Viking Press, 2008). It might be a revelation for family historians who metaphorically dig up ancestral dirt. Should I mention this also has direct relevance to anyone who is about to die? Which seems to mean all of us. 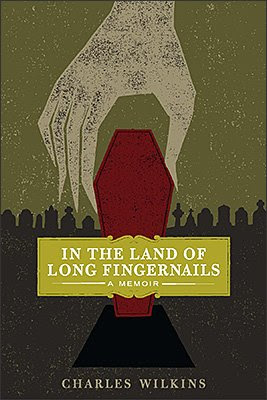 No, the book is not about ghosts, although it has scary elements. In 1969 Wilkins was a university student who took a summer job as a gravedigger. This was not his first choice to enhance his resumé. Presumably he had hoped to become a kids’ summer camp counsellor or something equally altruistic. Instead he swallowed his disappointment and diligently learned to fit right in as low man on the totem pole at Willowlawn Cemetery. We meet the cast of true characters one would swear came from a latter-day Dickens: the never-sober Scots manager, the grumpy Dutchman, the over-educated Italian and the one-armed Pole. The collective misfits managed to perform the necessaries in a large urban cemetery, preparing gravesites, dealing with funeral managers and interring the coffins. Each employee knew his role. In between such bouts of intensive activity, they found their own rest in favoured grassy spots for a daily bit of mellow meditation.

Maintenance was also a routine part of the schedule. The grounds and the flowering plants were relatively easy. Old sinking plots and stray bones were handled on an ad hoc basis without bothering the management sailing on Cutty Sark. All still pretty straightforward in terms of job description for a young lad. Unless weather, or a union strike, interfered. Yes, both happened in 1969 in Toronto. Flooding rain does not bode well for some of the after-life occupants. Moreover, when the strike curtailed actual burials, we get a graphic visualization of coffins-in-waiting.

Wilkins’ macabre but funny memoir is a head butt with some realities of the death industry but it is always entertaining. (Maybe it’s a Canadian thing?) Lest you think I stand alone in my praise, Wilkins’ totally engaging writing style won him shortlist nominations for the Stephen Leacock Medal for Humour and the Trillium Award this year.

Shall we convince ourselves that the intervening forty years have seen improvements or shall we opt for cremation?
Posted by BDM at 20:54 No comments: 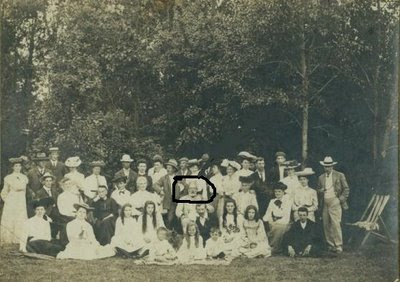 Speak to me, people!!
Who are you? Stop horsing around for a minute and give me some clues. Please? If the handsome patriarch in the middle would only tell me his name. I know he’s my ancestor, I just know. Which one is his wife? And who is the lady in widow’s weeds off to his right? Are those Manitoba trees I see in the background? Some of the family resemblances are very strong. What year is this? It’s making me crazy!
Posted by BDM at 23:37 2 comments:

Most genealogists seem to have their beginnings in curiosity about family stories. By now you know I’m an advocate for including them in a family history as long as they are identified as stories. I had very few hand-me-down Dougall ancestral stories.

When the first train in Canada performed its official run (from Laprairie to St-Jean-de-Richelieu) to great public excitement, emigrant ancestor John Dougall was allegedly a witness in the crowd. The Canadian Encyclopedia tells us that John Molson and other Montreal merchants were backers of the new service that opened officially 21 July 1836. It’s possible John Dougall was there. It’s possible some member of his family was there. Not an exciting or particularly mysterious family story!

The story was handed down that the oldest son Thomas Dougall emigrated from Scotland in 1832. Doubtless, Tom’s favourable reports convinced his parents to leave a life of agricultural labour for others and become owners of land in the new world. Up until their leaving, father John worked at different farms in the county as noted in the baptisms of his children in Livingston and West Calder parishes. John Dougall was about 53 years of age when he arrived in Quebec two years later. The saga of finding his baptism was recounted here. His wife Marion Hastie, born in Whitburn parish, Linlithgowshire, (the county of Linlithgow became West Lothian in 1921) was about 43.

Marion Hastie and John Dougall. Undated photograph, but prior to July 1867; in family collection of BDM.

John Dougall brought his entire surviving family to Canada in 1834. Before that, two daughters had succumbed to infant mortality. His son John was said to have been killed in a farm accident involving a horse, a year or so earlier. This family story has more “substance,” but is alas unverified. ScotlandsPeople with its recent extraction of burial records from the old parochial registers has not confirmed this. Nor have searches been productive among West Lothian cemetery stone transcripts, or monumental inscriptions as they are called in the U.K. The recording of deaths and burials has always been less than comprehensive in parish registers; transcription of cemeteries is still a great challenge in Scotland.

None of the Dougall sons remained on the original farm. Thomas went to Chicago and prospered. James moved to the more fertile Eastern Townships. George became a tailor in Montreal. Peter became a blacksmith like his father-in-law, and moved to Renfrew, Ontario.

St Andrews (St-André Est) in Argenteuil County, Quebec, is where my Dougalls and Frasers cross paths. John Dougall took a farm at Beech Ridge above St Andrews. One of my next tasks is to determine the notaries active in the St Andrews-Lachute area during the 1830s to the 1860s. Hopefully there will be a will or a deed to describe exactly where the farm was located. Alternatively, the Quebec Online Land Registry (ACAIQ) is searchable if you know the cadastral number of the property. And how do you learn that? The cadastral number is not a street or rural address; it’s the one allocated to any property for municipal taxation and valuation purposes. It’s one of those catch-22s. You have to know it to find it. Another puzzle to sort out.

My family stories are pretty thin for that first generation! It’s a long time since I made the last of two visits to St Andrews, but I still have the T-shirt to prove it! Visit number one was during the celebration of the tricentenaire (300th anniversary) of the founding of the Seigneury d’Argenteuil.
Posted by BDM at 17:53 2 comments: 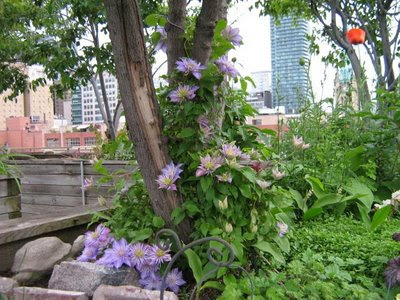 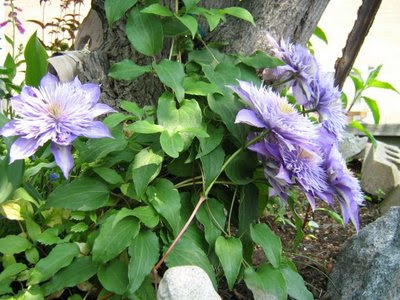 Filling in the Dash

Could we have a moratorium on “filling in the dash”? Someone thought up a good catch-phrase and now everyone’s using it and aren’t we getting a little tired of it already?

For the uninitiated, the dash refers to the space between birth and death dates in the conventional display such as you see on a cemetery headstone, e.g., John Smith 1789-1856. The dates of an ancestor’s birth and death. Filling in the dash is a simplified and buzzy way to say no-one wants to read a genealogy (aka family history, family tree) consisting of endless variations of the John Smith 1789-1856 ilk. Therefore, grassroots people, wake up and get serious about spending the extra time and effort to filling in your ancestors’ lives as much as the eras and sources allow.

The message is not new, of course. Genealogists have been exhorting each other for years to add biographical detail and all manner of contemporary community interest to our family histories. Clearly, filling in the dash fills the bill, taking on a life of its own among genealogical speakers, writers and educators. Since I have heard or read filling in the dash about ten-teen times this year alone, I was surprised to learn that it was new to many conference-goers. That probably means it will have a healthy shelf life. I can see the bumper stickers any day now.

One merely needs to google filling in the dash to see that it didn’t necessarily originate with genealogists. Although it was of passing interest, I decided not to undertake an extended study of its provenance. Suffice to say, perhaps, that personal memoir writers grabbed it back in 2003, sermons have been preached, the Journal of Memory and Language has an incomprehensible 1999 reference and “The Cemetary [sic] Kid” around about 1998 apparently used it somewhere in a New Times Los Angeles article—lengthy with no paragraph breaks—on the website Hollywood Underground. How’s that for superficial research?

But we do have our favourite clichés, don’t we? Begats are still a popular negative. In problem-solving, brick wall has replaced dead end. There are more, which escape me for the moment. Feel free to remind me! With any luck at all, the worn-out family tree will be struck by lightning. Personally, I think genealogists and family historians—labels I scarcely differentiate—are creative enough to make their own unique catch-words.
Posted by BDM at 22:26 No comments:

Another memorable weekend at the annual OGS (Ontario Genealogical Society) conference is over. Upon reaching home, the organizers and the participants should have been flat on their backs relaxing for at least 24 hours, breathing slowly and not talking. Hopefully not everyone’s bag of bones, like mine, is being sorely held together by spastic muscles. The pathology is endemic at every genealogy conference: lifting, hauling and dragging bags full of purchased books. Prior training would have been good, now that I think of it. Like practising several times a day. Hoisting your car up and down by its rear bumper would be a good start. At Sheridan College in Oakville no-one could complain about missing their daily exercise as we scooted all day long through the halls, tunnels and maze of buildings to find lecture rooms, the Marketplace, coffee and food! 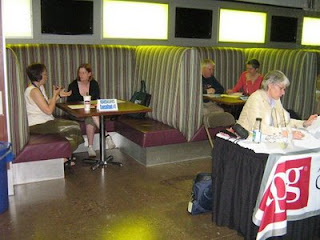 It’s always impossible to be everywhere at once to enjoy all the offerings. My job was to see that the OCAPG (Ontario Chapter Association of Professional Genealogists) display table and “Ask A Professional” free consulting services were running smoothly. Running, anyway. The OCAPG gang rose to the occasion again, despite so many members being program speakers and committed to other tasks. Our consulting schedule soon filled up nicely, but latecomers chatted with whomever was on table duty. If I only knew whether the man with the Irish church register page—written in the strangest Latin I’ve ever seen—found some translation success. In the photo above, Tammy Tipler-Priolo and Hilary Dawson consult, while Alison Hare holds down the table. 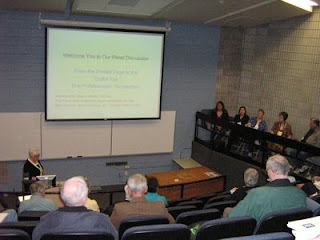 Here is OCAPG at work on the panel discussion: “From the Printed Page to the Digital Age: The Professionals’ Perspective.”
Moderator Sharon Murphy and (L to R) Susanna de Groot, Janice Nickerson, Ruth Burkholder, Tammy Tipler-Priolo and Brian Gilchrist.

For a short time I was able to attend part of the graduation program for the National Institute for Genealogical Studies, where Sharon Murphy has replaced me as head of the Canadian Department. It was a pleasure to see some of our OCAPG members receiving certificates of course completion—Margaret Aldridge and Ann Logan. Some graduates have completed certificates for more than one country. Managing Director Louise St Denis called on me to receive an honourary teddy bear which will add some warmth to my camel collection and one Thunder Bay moose. 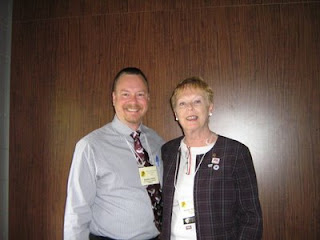 And GeneaBloggers! Steve Danko .. TA-DA! .. was on hand from San Francisco to receive his PLCGS in Canadian Studies.

Grateful thanks to all the OCAPG members who carried the ball.