Proposed Chapter 7: Using Genetic Evidence
All work products reporting genealogical conclusions—including those using DNA evidence—should meet the Genealogical Proof Standard and all relevant standards. The following standards, specific to DNA, do not stand alone. They are not the only standards that genealogists’ work should meet. Cross references identify the related existing, published standards.

1. DNA testing is:
• Selective. Genealogists select DNA tests, testing companies, and analytical tools with potential to address the genealogical research question.
• Targeted. Genealogists target test takers based on their DNA’s potential to answer a genealogical research question.
• Sufficiently extensive. Genealogists examine the test results of a sufficient number of test matches to draw conclusions about a relationship and to analyze and eliminate competing hypotheses about the relationship posed in the research question. Testing can involve any of at least three groups:
a. Test takers descended from a hypothesized common ancestor through multiple lines of descent
b. Test takers who descend from multiple possibilities for a common ancestor
c. Test takers selected to distinguish among shared segments pointing to a common ancestor
[See glossary for definitions of ANALYTICAL TOOLS, COMMON ANCESTOR, CONCLUSION, DNA, HYPOTHESIS, RESEARCH QUESTION, SHARED ANCESTRY ON MULTIPLE LINES, SHARED SEGMENTS, and TEST MATCHES.]
[See related Standards 9, 11, 15, 17, and 19.]

2. Using DNA test results. Genealogists consider all available relevant factors when they use DNA test results as a component of proving a relationship. Those factors include reported and typical amounts of shared DNA, sizes and locations of chromosomal segments, information about mutations, markers or regions that have been tested, number and genealogical expanse of people who were tested, and genetic groups, including meaningful triangulated groups.

3. Identifying shared ancestry of DNA matches. Genealogists using autosomal DNA both report and accommodate the possibility of shared ancestry on multiple lines. The report addresses the accuracy, and depth of test-takers’ pedigrees and assesses any gaps in those pedigrees. Genealogists accommodate gaps by selecting one or more strategies such as the following:
• Further documentary research
• Additional targeted testing
• Clear explanation with justification for concluding that the gap is irrelevant to the research question
• Segment triangulation
• Analysis of data from clustering and genetic networks
[See glossary for definitions of GENETIC NETWORK, PEDIGREE, SEGMENT TRIANGULATION, SHARED ANCESTRY, and SHARED ANCESTRY ON MULTIPLE LINES.]
[See related Standards 17, 40, 42, and 45.]

Labels: Board for Certification of Genealogists, DNA, genealogical standards

Nathan Dylan Goodwin. The Wicked Trade. Self-published, 2018.
Goodwin scores again in the seventh of his Morton Farrier, Forensic Genealogist series. Possibly his most interesting case yet begins with Arthur Fothergill who wants to learn more about a formative period in the life of his great-grandmother Ann Fothergill. Even more important, who fathered her son? Arthur knows from family papers and an old newspaper source that by 1820, young Ann was living a reprehensible life in and out of prison for petty crimes. 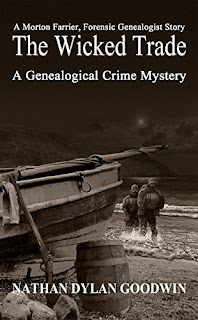 Morton's own bizarre family story continues to unfold. His daughter Grace turns one year old, the occasion for overseas visitors and the first meeting in forty years of Morton's biological parents. Some bafflement on my part: Why did Morton haul out Jack's old love letters to Margaret in front of everyone, letters that Margaret had never seen before? Insensitive and out of character, I thought. The DNA evidence of paternity was rather fuzzy since one of Ann's lovers died without issue; how did the use of online family trees and Lost Cousins prove the father of Ann's son (only a family historian would question this!). Nevertheless, Goodwin and Morton do lively and engaging work pulling off surprises here.

Family historians have built a healthy fan base for the Morton Farrier books but they appeal to an even wider interest in crime fiction. How about a couple of extracts to tease your appetite? ...

Ann nodded. "What say ‒ quitter for quatter, like ‒ that I not be moving on tomorrow and be lodging here a while longer? Happen, then, I be forgetting all about men that pay you in the night time."Hester's narrowed eyes displayed such bilious anger. Short snorts of air fumed from her nostrils, as, with hands on her hips, she contemplated Ann's threat.Ann stretched exaggeratedly, as though she had all the time in the world to wait for Hester's decision. In her peripheral vision she spotted movement outside. Sam was walking the path to the house. Ann danced her way to the door and pulled it open. "Sam, what a delight. We be just talking about you.""What grabby weather," Sam complained, removing his boots, shooting curious looks between the two women. (103)

Morton took several photographs of the occasion, very keen to immortalise the day forever. He then handed the camera to Lucy and asked her to photograph the family group. Switching to playback, he zoomed in to the image. In the centre were he, Juliette and Grace, a scene of relative normality. Beside Juliette was her mother, Margot. The further he pulled out of the picture, the more bonkers it became: his American biological father with his wife; his biological mother (who was also his adoptive aunt) with her husband; his half-brother Jeremy (who was actually biologically his cousin, and yet more familial to him than his actual half-brother, George, who was at the edge of the image, frowning) and his Australian husband; and finally, his deceased adoptive father's fiancée, Madge.A perfectly normal family. (208)


You can find out more about The Wicked Trade and other books on Goodwin's website: www.nathandylangoodwin.com; orders for paper, audio, or e-book versions will go through Amazon.