Dear readers, a break from the tedium of Frasers, McFadyens, Dougalls, et al.
With a mixture of pride and humility, I congratulate the Puslinch Pioneer on its 35th anniversary this month.

Wot, you say? What is a Puslinch? And why does it have a Pioneer?

In 1976 two youngsters were surveying the vast vegetable garden my late father-in-law had lovingly cultivated on my century farm. Incomers, both of us. Grumbling about the lack of official council communications that affected local life. Grumbling about arms-length suspicion from our entrenched farming neighbours. We didn’t want to live in a bifurcated community. We wanted to signify our empathy for both tradition and the changing reality. Also, we were a bit giddy from liberal ingestion of anti-allergen medication. Late spring, you know. 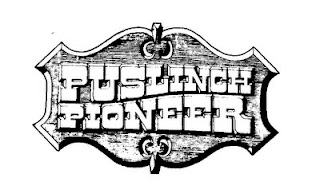 The Puslinch Pioneer was born. As a newspaper circulating within the township, it aimed to bridge the conscious gap between “us and them.” We began with a $100 donation and a borrowed gestetner! Initially, suspicion deepened, if anything. But we learned a great deal about things agricultural, historical, and political. Running on a shoestring, we worked out delivery methods to township homes. We exposed some shady practices of the council and its administration. It took time for acceptance, ... not without controversy.

Yes, the old-timers were right. The incomers did change the local demographic. But slowly, gradually, the newspaper’s advisory board began to reflect the “old” township names. Not only acceptance, but togetherness. Today the Puslinch Pioneer is a tradition in itself, a vital community organ. It’s the only newspaper in Ontario consistently operating with all volunteer personnel. Possibly in Canada.

Take a bow, Puslinch. Hearty congratulations from a founder to the memorable contributors who worked so hard over 35 years!
Posted by BDM at 22:42 3 comments:

A speculative hypothesis to add to the mix: Did my mysterious John Fraser “from Inverness-shire,” the farmer at St Andrews East in Quebec, have a brother called Donald? ... more searching for clues to his origins.

A Donald Fraser appears in the 1825 St. Andrews census in the age category of 25-40, with a wife and four or five children.[1] The poor microfilm quality and continuing folio pages of these early census returns make it extremely difficult to follow some columns with certainty. Donald’s location is on the east side of the River Rouge Road, same as John. He appears again in 1831 when his household of youngsters expands, still ranging from under the age of 5 to the age 14 and under 18 category.[2] His own age is between 30 to 60.

Then Donald and wife Mary McLean of River Rouge had a daughter Marianne baptized 19 September 1833 by the minister of Chatham.[3] After that he’s not to be found.

Donald’s age is rather critical for a potential relationship. The census age category opens a birth window of approximately 1785-1800. Any parents in Scotland looking the same as John’s? A couple with both an appropriate John (ca.1776) and a Donald? A possible match is in Kiltarlity, a Donald baptized 19 March 1797 to father Alexander at Easter Cluim, mother un-named. (A son John was baptized 24 Nov 1776 in Kiltarlity, father Alexander at Ballehagan). Ah, yes. The recurrent, ubiquitous Alexander whose-wife-is-not-named (no doubt one of several Alexanders-whose-wives-are-not-named). But hey, a man could have moved to another farm within the parish in the intervening 21 years, right?

Without putting the cart before the horse, does it stand to reason a man born in 1797 would have four children by the age of 28? Barely! Allowing for the usual two-year birth interval, Donald would have had to begin fathering at the age of 20 and we assume a marriage before that. As far as I know, that’s rather young for your average hard-working Scots farmer in those days. For the sake of argument, let’s assume the Donald of 1825 was more like age 35-40. Still, he is a needle in a haystack at ScotlandsPeople if his baptism was indeed recorded.

Alternate theory ... could Donald have been a hitherto unknown oldest son of John our farmer? What does ScotlandsPeople tell me? Recorded baptisms do not uncover a couple called John and Ann Fraser with two such sons. No joy here. Meanwhile. This focus on Donald forced me into some analytic acrobatics.

Daniel Fraser “in Argenteuil,” married Mary McLean of the same place on 17 February 1823 in Montreal, “being both of them arrived at the years of maturity.”[4] Witnesses were Allan Cameron and James Mc[Ewen?]. Wouldn’t you know it, this begs more questions:
■ How interchangeable were the names Donald and Daniel? Phonetically, to listeners and even among Gaelic-speakers, it was close. The written record could depend on the scribe’s ear.
■ Is this the Donald of the 1825 census? Only if he’d been a widower when he married in 1823, because two years later he had four or five children. Mary is described as spinster in the marriage record, but the status of “Daniel”is unremarked.
■ How mature is “maturity”? Rev. Robert Easton of St Gabe’s used this phrase often in marriage records, so it may signify no more than the parties were 21 years of age or older.
■ Could Daniel be the son of some other Fraser in Argenteuil? In the 1825 census already mentioned, my John had an eligible male, but he was not a Donald or a Daniel. Our subject Donald did not have such an eligible male in his household. Another John Fraser at North River had only a wife and a young girl.

Information gleaned in the St. Andrews area points to a Daniel Fraser. He was a witness at the 1821 baptism of John Fraser’s daughter Elisabeth.[5] Again in 1845 Daniel was recorded at the burial of my John’s son Charles.[6] The timing between the two events is almost a whole generation.

Moreover, a Donald Fraser “of Argenteuil, parish of St Andrews”[emphasis added] and wife Mary McLean had a son born 29 May 1823, baptized 4 March 1824 in Montreal.[8] Is this “Daniel” of the 1823 marriage? What are chances of both a Donald Fraser and a Daniel Fraser from the same place having a wife Mary McLean? I tend to think this couple was just in the nick of time to baptize a “three-month” baby. Could be that’s why they chose a church other than their 1823 marriage location. Indeed, one might ask why Donald was apparently avoiding the Presbyterian minister at St Andrews, who’d been available since 1818.

So we have a family man Donald at St Andrews/River Rouge 1823-1833 minimally, in close proximity to John. Then we have a Daniel present at the 1821 baptism, who married two years later. Perhaps there was a rather short interval between the death of Donald’s first wife, mother to most of the 1825 children, and his new wife. Despite the forename variation and all too brief appearances in meager sources, I’m concluding for now that they are one and the same man. “Mary McLean” is the common thread that binds them. Whether it’s convincing remains to be seen.

An interesting exercise—but no light bulbs illuminating a relationship to my John, nor to their origins in Scotland. Surely sources are not totally exhausted yet.

Dear Blogspot dot com:
Why do I have to fight you all the time to make a PHOTOGRAPH appear on my blog? Or for that matter, why photos disappear from previous blogs? It's not just MY issue!
Yours truly
BDM
Posted by BDM at 22:35 No comments:

Another gasp at finding the origins of my Inverness-shire John Fraser. Let’s take a different tack. Who were the associates and neighbours of John Fraser on the Rivière Rouge at St Andrews East in Quebec?
Attention to the “FAN Club”can be effective for uncovering clues to ancestral roadblocks.

The seignory of Argenteuil was sold by Louis Panet on 24 May 1793 to Patrick Murray, Major in the 60th regiment, “former commandant of Fort Detroit.”[1] Furthermore, says the website, the seignory was again sold in 1803 to “Mister James Murray” and in 1808 to Sir John Johnson (some of the documents are posted online). Murray encouraged Scottish settlement in the area without organizing any migrations. A few prior inhabitants were there by 1800, a mixture of Canadiens, Loyalists, and New Englanders. The compiler of the principal local history did not always mention origins, generally or specifically.[2] Occasionally cemetery inscriptions provide such information.[3]

John Fraser’s two eldest sons married daughters of a nearby farmer, John McMartin. Local lore says John McMartin was from Glenlyon, Perthshire, settling at River Rouge by 1802.[4] Among many community activities, McMartin presided over the formation of the County of York [Quebec] Agricultural Society in 1826; his “fine old homestead” moved out of family hands in the 1890s. Another McMartin family was from Stirling, Perthshire.in 1830.[5] The Dewars came from Glasgow in 1804.[6] Other Scottish families were from Ayrshire (McAdam 1849), Argyllshire (McCallum 1820), Perthshire (McEwen 1818, Young 1825), and so on.
In other words, Rivière Rouge was not a cluster of families that arrived at the same time from the same overseas community. Settling slightly farther afield was Angus McPhie from Fort William, Inverness-shire, upriver at Chatham in 1802.[7] John Cameron also came from Fort William about 1802, putting his roots down in Côte du Midi. He was an early witness for Fraser family baptisms. That may be as close as I come to an Inverness-shire link. Fort William was in Inverness-shire’s southernmost parish(es) of Kilmallie & Kilmonivaig.

For a time the churches and shops and services of St. Andrews village became a centre for outlying clusters—Riviere Rouge, Beech Ridge, North River, Côte du Midi, Carillon, Geneva, and so on upriver as they developed. Irregular visits from Presbyterian clergy commenced about 1815; prior to that, Anglican clergy were sometimes available. Most of the Scots seemed to be interchangeable witnesses at each other’s marriages and child baptisms. Many descendants of the pioneer families had moved on in every direction by the time Thomas published his book in 1896, when the demographic of the place had altered.

The land records I have been able to obtain with regard to John’s tenure are minimalist seignorial entries with no illumination of the parties involved. John bought his property claims in 1806 from Alexis Campeau and someone called Newton, from Stephen Tuttle in 1818, and more in 1824 from Campeau. Some were likely absentee owners. Tuttle was likely connected to a documented Loyalist family, and for some time lived on the next lot to John.

John Fraser was still living at the age of 84 in the 1851/2 census.[8] Among his neighbours on the agricultural schedule were various McMartins and other familiar pioneer names—Gray, Dochstader, Cameron, Wales, Stackhouse, and many more, without creating an incredibly long blog post. Old John Cameron was still alive too, at age 88 ... where the census revealed his wife’s name as Catherine McIntyre.[9] Well, what a coincidence (gleeful smile), since my John’s wife was Margery McIntyre! I don’t know enough about these McIntyres yet, but there was a total of only three in that enumeration. John Cameron’s first “appearance” was at the baptism of John Fraser’s daughter Anne in 1812 by Anglican minister Rev. Richard Bradford.

Another neighbour in the 1851 census raised a flag that will need addressing in a future “Fraser (Perthshire)” blog post. Meanwhile, this exercise did yield some tidbits to explore. Endless, isn’t it?