A post of agony about the Frasers of Perthshire, to be tolerated with kind empathy. Especially by those searching for equally frustrating families like Smith and Jones. I noticed that I’d been spelling Killin in Scotland as Killean half the time so changes were made for consistency. They sound the same to me. For a long time I lived in an Ontario township where communities were named after places in Perthshire ... Crieff, Badenoch, Aberfoyle, Killean [sic] ... some kind of pre-ordained Scottish omen, I suppose. So I say Killeeeeeeen however it’s spelled.

My post about the town of Killin lamented the surprisingly (to me) scant number of Frasers in South Perthshire burials recorded by the Scottish Genealogy Society (SGS). I said: Why am I getting this sinking feeling that gt-gt-gt-Duncan’s grandfather may have drifted into Killin from Inverness-shire where the Lovat Frasers were concentrated? He would have been the age to be young and healthy at the time of the Battle of Culloden. 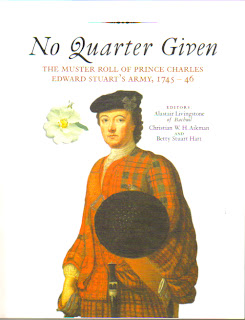 We’ll have to scrap that romantic notion because not one Duncan Fraser appears in No Quarter Given, a work that took years of research by many scholars and may never be definitive.[1] There were plenty of Frasers who fought for Prince Charles Edward, most notably among Lord Lovat’s clansmen of Inverness-shire. Simon Fraser, 11th Lord Lovat, is the one who was executed after Culloden for his support of the controversial Young Pretender. Don’t get me started.

As for the “missing” gravestone of Janet Fraser and husband Alexander MacFarlane in South Perthshire Monumental Inscriptions, which I had viewed in person, cousin Lizzie rightly pointed out that the SGS was concentrating on pre-1855 inscriptions. (Self: I knew that, didn’t I?) Because from 1855 onward, Scotland has official registrations of deaths, along with births and marriages.

A research plan is needed. What do we know about our earliest ancestors?
➢Duncan Fraser was baptized 24 July 1783 at Killin. His marriage to Catherine Robertson took place at Killin on 18 July 1807. Duncan died 15 February 1867. His parents were:
➢John Fraser, baptized 17 June 1751 at Killin. His marriage to Janet Buchanan before 1783 has not been found; they had five children born after Duncan. John’s parents were:
➢Duncan Fraser and Margaret McKeracher. The couple had three other children later than John, but neither baptism nor marriage for Duncan has been found. A burial index at Stirling Archives indicates a Duncan Frazer of Luib (another nearby hamlet) was buried at Killin 7 January 1787. The date would fit this particular Duncan—if there had been a gravestone, it’s no longer visible.

Most of the above is based on parish register searches as indexed at FamilySearch.org. Parish extractions  for all of Scotland have not produced a “likely” Duncan married before 1751. Here is where we lose our thread, stalled at 1751.

It’s not as if the information is there and Duncan has somehow failed us. The available records do not include marriages at Killin which are missing 1699-1708 and 1720-1782. Um, yes, have we not heard this problem before? ... in other parishes and other families. Does anyone tell us why they are missing, or does the answer really matter? The records have disappeared through some kind of neglect or misadventure or might never have been written at all. So we have to suck it up.

Genealogists and family historians call this a brickwall or a roadblock problem. One strategy then, perhaps the only strategy, is the attempt to reconstruct every contemporaneous Fraser family in the area (SIGH). Say from 1700 to 1800 in this case. Tracking the available (Self: SO regretting over-usage of this word!) existing Fraser baptisms, marriages, and gravestones in and around Killin is the main way to do this. 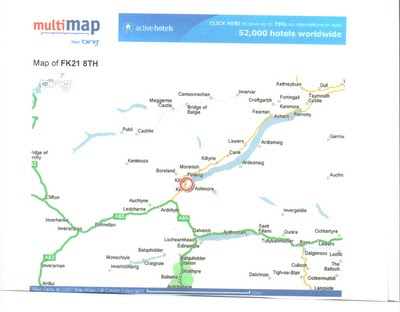 At the same time, adjacent parishes and place names need to be kept in mind while searching databases and records. Additional monumental inscriptions need studying (but can’t expect volunteers to have recorded every burial ground in the country). Contact with local family history societies is essential—they have members’ interests, query pages, or copies of compiled family histories. Someone out there, in Wazoo, Australia, or Bottomley-on-Sprye, England, could have a missing link for me. I haven’t given up on the notion that Killin Kirk Sessions might have references to pertinent Fraser individuals (especially if they were naughty) because they do exist from 1723-1762.

Why did Duncan’s descendant Dr William Fraser (1810-1872), brother of my gt-gt-grandfather John, name his third son William Lovat Fraser? Did the doctor know from oral family lore something we don’t know? Oh no. Am I ultimately facing the complicated parish records of Inverness-shire? Complicated, because in that region the name Fraser is the equivalent of the dreaded Smith everywhere else.

Lizzie, our work is cut out for us. The next batch of monumental inscriptions is on its way to me.
Posted by BDM at 19:11 1 comment:

... continuing a small series on less-than-exhaustive searches for two mysterious George Porters.
One George disappeared from Upper Canada about 1800; another George surfaced in 1814, outlined here. Family origins for both are unknown. Two previous “Persons of Interest”have already been introduced. The Rifleman was said to be from Pennsylvania; the Blacksmith apparently originated in New England.

Speaking of Porter families in New England, one branch produced some prominent figures in the Buffalo and Erie County area of New York ... which is where? ... across and upriver from our George Porter the Carpenter’s first appearance in Newark (long since renamed Niagara-on-the-Lake but often referred to as simply Niagara). The next Persons of Interest:

The Surveyor
Augustus Porter (1769-1849) was born in Connecticut, the son of Col. Joshua Porter (born 1730, son of Nathaniel) and Abigail Buell.[1] The six children of this couple, by various accounts, do not include a George. Augustus was a surveyor who arrived in western New York in 1789 and became well-acquainted with the region.[2] His brother Peter B. Porter (1773-1844) later joined him, both purchasing extensive lands along the Niagara River to become pioneer residents, developers, and wealthy businessmen of Black Rock (Buffalo) and Niagara Falls. Augustus eventually became a judge and Peter became a general in the military, which are huge (and shameful) over-simplifications of their respective lives.[3]

The Person of Interest Part:
Number one, George the Carpenter named his second son Augustus. Not your run-of-the-mill name (the first son was David). The name does not occur in his wife’s family. It seems to be rare among the New England Porters. No use asking about baptismal sponsors ... George quite successfully avoided all contact with church and clergy in Newark and York. Number two, a descendant recalls a family tidbit that George himself had been engaged “as a surveyor” at one time. Number three, the Niagara proximity features again—but that is a given with all persons of interest. Residents on each side of the Niagara River were well aware of each other’s activities and considerable traffic—economic and social—went back and forth. References to leading citizens were published in newspapers on both sides.

When George the Carpenter’s son Augustus was born about 1798, the family was in the town of York. But George still had some unresolved property claims in Newark. Did he pull the name Augustus out of a hat? Or did it come from his own unknown, now forgotten, ancestral line? Or could it be he deeply admired a well-known entrepreneur across the river? A man, coincidentally, with the same surname ...

The Surveyor’s year of birth makes him a contemporary of the Carpenter. Augustus from Connecticut was unlikely to be the captured Rifleman in 1794, if we are to trust the report of the Rifleman being a “native of Pennsylvania.”

The Other Surveyor
Admittedly, I am hung up on the name Augustus. So hung up I might suspend credibility with this one. In 1788 Augustus Jones (c1757-1836) was sworn in as a Crown surveyor near Newark.[4] From 1791 to 1800 he served as chief surveyor for the old Nassau District of Upper Canada which encompassed the Niagara peninsula and well beyond. Augustus came from a family settled in Newburgh, in the Hudson River Valley, and had trained as a surveyor in New York City.

Does it defy possibility that, when George the Carpenter first came to Upper Canada, he worked on Jones’ survey crew for a year or so? If Augustus Jones actually recorded the names of his axe men, chain bearers, and so on (few surveyors seemed to do this in their working diaries), it might give us a reason for the naming of George’s son ... assuming he had great respect for Jones.

The earliest surviving survey diary of Augustus Jones is from the winter of 1793 with no names of the men he hired.[5] His 1797 diary, at work on the Grand River, illustrates the occasional reference to the largely nameless employees: “one of the hands” was bitten by a rattlesnake, and applying some roots to the wound “made the man easy.”[6]

Both scenarios for naming a child Augustus—the surveyor in New York State, and the surveyor in Upper Canada—would eliminate the name as a clue to family origins.

Now that I’ve taken up this much space, the promised Doctor will have to wait till next time. It’s not all bad to have your imagination working for you when the target keeps dodging. But the circles around the bulls-eye target expand wider and fainter. Perhaps these preliminary surveys of “Persons of Interest” will clarify where more disciplined and focused research should apply.