Julie Goucher's Book of Me has its taxing moments in the memory and feelings departments. Now, to be truthful here ― and that's what we're aiming for, right ― I am not putting myself out in public naked and cringing because I told three lies in my lifetime or peed my pants in Mrs. Jacobs' grade one class. On the other hand, mustn't cater to some kind of ancestor popularity contest among descendants not-yet-born. Attempting a balance, I have to do Julie's challenge my way.© Paul Anka

And I'd like to say at this point that when you have genealogy fatigue or family-history-writer's-block, Book of Me is a great way to distract and/or refresh yourself. It also reminds you to scan some of those fuzzy old photos before they fade entirely, so the whole exercise is mucho win-win.

My thoughts on Prompt Three: Physical Self (15 September) began and almost ended with:
Once a dancer, always a dancer. That says everything about my physical self. Except for forty years my hair was unmistakeably, vividly, Celtic RED and of course that says everything else.

That's my story and I'm sticking to it.

But I noticed in the Prompt 3 responses a lot of autobiographers got hung up with one of Julie's suggestions: size. Struggling with weight is only one kind of lifelong pain. Lest you think I'm cheating I will say I was always the tallest. Tallest often makes you the shyest. Tallest makes you stand out ~yerm~ as an easy target of fun from creepy little grade seven boys. Tallest makes you ineligible for the ballet company because you can't partner with short creepy men. Tallest makes creepy people call you big even if you're skinny. Combine that with red hair and don't think it was easy growing up. My teenage friend from Stuttgart confidently told me that Europeans innately, consistently regard redheads as evolutionary defectives.

Nevertheless, I successfully portrayed a (tall) mouse in the skating carnival and moved on to dance recital levels to be a butterfly and a singin'-in-the-rain hoofer and a thunderbird and years of fabulous costumes our mothers made, when mothers used to sew, reaching solo status as Snowflake, assistant to George the Porter who was a quasi-Santa fixture (a Thunder Bay thing, don't ask) in the annual Christmas extravaganza.

Then it morphed into serious classes in days when we had to darn our fragile pointe shoes so they'd last more than one performance and our examination tutus were made by the company's wardrobe mistress who was so kind to me because surprisingly she was a good friend of my ancient "aunt" Agnes B. Dougall in touch with my father who was terrified I'd become a theatre person (well, I did for a while; the musical stage is where the tall girls go unless you get a Vegas showgirl contract like my friend Ginny — thankfully she survived that and a bad marriage) so had to keep up the piano lessons that somehow pacified him even though Mrs. Bancroft (about grade ten that was) was so sick of listening to the same opening bars of the same Rachmaninoff concerto every week for a year coming from incredibly clumsy fingers for someone who could dance. Bless your patience, Mrs. B.

So. Not limiting myself to classical training, fast forward a bit to a life of domesticity and child-raising. Luckily some of it coincided with a trend in balls (but not enough of them) entailing long dresses and social dancing. BTW a man who knows how to waltz is worth his weight in gold; I only ever met two and unfortunately did not have affairs with either one, more's the pity (honestly, I would tell you if I had). The occasional military ball spiced it up with what I call Scottish cross-country dancing.

Now that I've taken up all this space which seems awfully self-indulgent to me, you may well ask — if you are not snoring by now — isn't that all ancient history, how dare I imply the dance, or more to the point, the dancer goes on? Self-delusion? 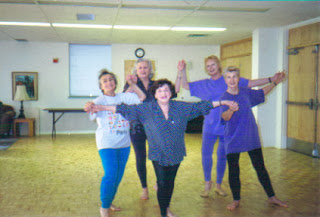 Well, the fact is most do. Right into the golden years when we need to keep creaky limbs from rusting up like a junked car, no matter how the body has changed ... hiding middle-aged spread under flowing tops; giving up the awesome three-inch heels and beloved (non-orthotic) boots; pretending the arthritic joints or dimming vision or hip replacements are temporary blips to overcome. Try shuffling with the latest offerings like zumba, clogging, salsa, belly dancing, meringue, you name it (it's okay to draw the line at break-dancing or whatever they call it now). Hey, even karaoke invites creative moves.

It's all of a piece. An overheard phrase of music only has to start and the body's twitching in recall. You know what I'm talking about. Betcha some of you never thought of yourselves as dancers.

Things have a way of evening out somehow. I'm no longer the tallest kid in the chorus line and the hair has faded. Meanwhile, as Sonny and Cher said, the beat goes on. 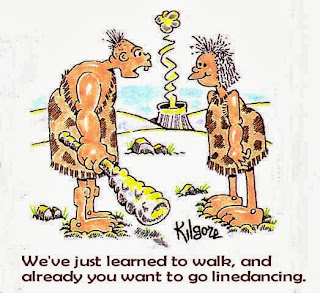 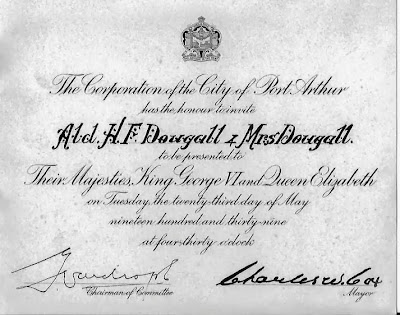 The Book of Pathetic Me

"The Book of Me Written by You" is a project I first saw on Geneabloggers, devised by the inspired Julie Goucher of Anglers Rest. It's a natural for genealogists who dwell mainly in the past. We should thank Julie: Shame on us if we forget our own biographies, neglect attention to our own lives because who knows us better than us? How could a third party possibly get it right??

This is important work. The assumption is that the scribblings will satisfy an intensely curious future someone (not happening now, is it). Not that we are compelled to make just every old thing public.

Regarding the serial prompts, this writer has already fallen behind Julie's schedule. Regarding the personal history, I began it long ago and then skittered sideways when it became problematic. Problematic means how confessional are you going to be. You know, in case your kids get their hands on it before you actually die. Besides, other projects hopscotch the order of precedence with distractions always leading from one thing to another.

Take now for example, multi-tasking Book of Me along with breakfast preparation, no, it's more like lunch time, thinking calcium and fibre, where are the radishes, and attending to the laundry upstairs but on my way out the door CBC radio plays "Jerusalem!" so needs must halt and joyously deliver word for word (it's a Pavlovian thing: wherever I am when the opening chords sound, a thousand days of morning hymns at boarding school kick in) which then reminds me I wanted to look up William Blake designs for another project, write that down in the daytimer, why is that plant on my shelf looking brown, reach the laundry room only to catch an unavoidably socially-interactive moment with the local hypochondriac, then to quickly fold some of that same laundry so it doesn't get horridly wrinkled, making the bed at the same time somehow goes with it, better vacuum up those popcorn bits, discard yesterday's scattered reading material, ...

Good lord. Is that who I am? Where were we?

I had to scroll down AnglersRest for Prompt One, Who Am I? (posted 31 August). OK, tick off everything on that list. No: correction. Delete tea drinker, chocolate lover, and Alfie whoever he is. On second thought, that must be who Julie is. Let's add camel chaser. Is that good enough? Maybe the defining of oneself should begin with a blank page (like my head goes when I run across anything that smacks of mathematics numbers). I can see Prompt Four will appear before I properly get over this one.

Next. Prompt Two, My Birth (posted 7 September). My birth. That's a good one. Truthfully, I don't remember a thing. Everything from birth to ca. two years and ten months old is a blur, deeply hidden in the neurological recesses. Julie did a terrific job on hers. This must be the hardest part. No baby book courtesy of Mom. Besides, can we trust mothers to tell the truth? Sure, she was an original source with primary information but was she conscious the entire time? How much credibility do we give the Arthur Janov school of thought?

This is quite tiring so far. Definitely more work to do. Good thing it's a long way till we get to my problematic parts. Up the flag and carry on, Julie.