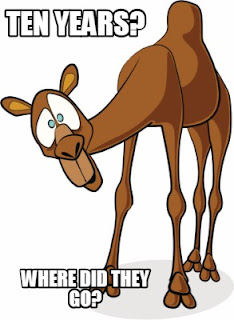 Like some long-term bloggers, I experience a posting slowdown ― not for lack of subject matter but the focus of interest shifts back and forth. It's quite a few years since I retired from researching for clients. In that time I have tackled a great deal of personal family research. The family projects never end. And my filing cabinets, physical and mental, contain plenty of genealogical material I can still explore, review, research, and commit to written posts or journal articles.

This year I will not be renewing my Certified Genealogist® credential. Mainly because without new client work and having already used many family research problems in past renewals, I am too lazy to devote the required time for a meticulous but oh-so-worthwhile procedure. So I'm resting. In a manner of speaking. Thirty-eight years I have proudly held this credential and owe so much to the Board for Certification colleagues who encouraged and supported me. Serving as a BCG Trustee with the likes of ~ name-dropper alert! ~ Helen Leary, Elizabeth Shown Mills, the late Joy Reisinger, Donn Devine, Ron Hill, Christine Rose, Tom Jones and many more, was an education in itself. I salute you all who continue to foster and mentor and educate.

On 30 March 2007, I was a fledgling blogger being tutored by my patient child. The concept was such a novelty we didn't even think of creating an inventive, catchy name for it. What you see is pretty much what you get due to her confidence in me.


On 30 March 2017, I just completed one of my marathon flight days, homeward bound from Casablanca. Only twelve hours flying time this trip, not counting airports. (Why is it I can't seem to get a direct flight to my destinations? Rhetorical question.) At some point, the latest adventures will pop up on my other love, CamelDabble TravelBabble (now there's a name for a blog).

Once a writer, always a writer. Whether it's genealogy or travel or crime fiction, it might slow but it won't stop. 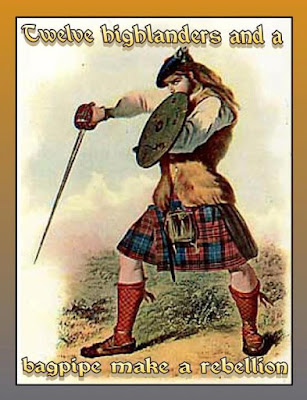 Someone decreeth March 10th is Bagpipe Day. Or it may be in June. Others say Bagpipe Appreciation Day is different altogether. Whenever ... any excuse for waxing sentimental about tribal memory, sez I. It’s in the DNA: I had to post.

Rescued from a cached page that apparently appeared at one time in a forum on Canada At War:

The bagpipe is the only musical instrument deemed a weapon of war because it inspired its troops to battle and instilled terror into the enemy. The skirl of the pipes stirs men's and women's souls and its power and influence in battle as in life, is measurable.
The effects of the pipes on friend or foe are legendary crossing all cultural, geographic, economic and historical barriers. An examination of the origins and development of the pipes, their use among the ancient Celts and in modern warfare and life reveal their true and enduring significance.The origins and history of the pipes is interesting as the world has known the pipes in one form or another for more than 5,000 years. Bagpipes were invented when people found they could make music by blowing into a hollow reed and eventually the idea of harnessing a bag for a reservoir of air evolved. References to pipes are made in the Pharonic literature of Ancient Egypt, the Ancient Holy Land Scriptures. During the days of the Roman Empire there are numerous references to the pipes being played and in fact it is widely believed that Nero himself played the pipes and that Rome fell to the sound of the pipes, not the fiddle as previously thought. It is quite probable that the Romans brought the pipes to Scotland during their invasions.[1]

I can attest to the international life and love of the pipes. A favourite moment, being serenaded in the ancient Roman city of Jerash by members of the Jordan Armed Forces. I wrote longer on bagpipes and camels and military tradition: https://camelchaser.blogspot.ca/2016/05/military-and-police-camels.html. 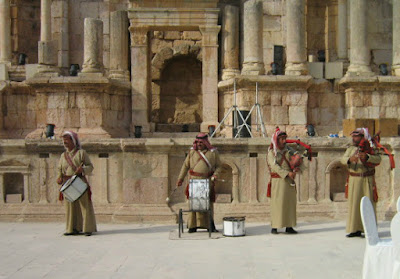 It seems there are no idle moments in the life of a family historian. From time to time I pick up on an item that sends my curiosity skittering off on a tangent. This is akin to the well-known genealogical principle that you cannot search a newspaper for a death notice without being distracted for hours by pages of local gossip, police reports, lurid adverts, and legal notices ("she left my bed and board ...").

Loyalist Trails is a regular newsletter from the United Empire Loyalists Association of Canada (UELAC), loyally put together each week by Doug Grant, UE. Anyone, member or not, can subscribe to it: http://www.uelac.org/Loyalist-Trails/Loyalist-Trails-index.php. One of my distractions, in the Loyalist Trails edition of 15 January 2017, was the following bit from Stephen Davidson's "Mother Goose. Loyalist Style. Part Two of Two":

Interestingly, there are compensation claims for three loyalist bakers who all once tended ovens in Boston prior to the revolution. Benjamin Davis described himself as "a baker in government service" who had made himself "very obnoxious" to the rebels. He was one of 1,100 loyalists who fled when the British forces retreated to Halifax from Boston in March of 1776. When Davis attempted to sail to New York City that summer, patriots arrested him and imprisoned him for twelve months. By 1783, the loyal baker had settled in Halifax.

Is this the same Benjamin Davis that I know? ... First of all, men with the same or similar name do appear in Loyalist references ― references that may conflict in a detail of place or date or spelling (ask anyone who has struggled with identifying the likes of Crysler or Hough or MacMillan men). In this case, "settled in Halifax" sounded like a definitive statement: that the man had reached his permanent destination.

My Benjamin Davis was in York Township (now part of Metro Toronto) at least by 1796 when he received the Crown patent for a property at what would become Weston village. He was peripheral to the family being studied at the time and was not investigated per se. Benjamin and his wife Elizabeth were childless; at some point before 1813 they more or less adopted John Porter, a son of that scallywag George Porter, about whom I've written ad nauseam. 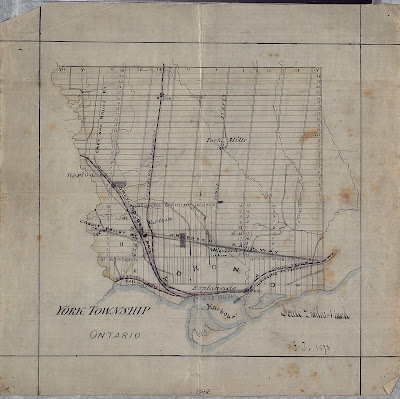 I did know that when Benjamin died in 1817, he bequeathed to John Porter a large piece of land on the Humber River with the proviso that he care for the widow Elizabeth until he was twenty-one (John was born ca.1800 in the Town of York). In gratitude, I expect, John changed his name to John Davis Porter thereafter.

Would a baker settled in Halifax pack up his family and his business to migrate to Upper Canada? What could confirm or invalidate the two men being one and the same person? Off the top, land petitions (and/or other land documents) might reveal the prior residence or origins of the man who appeared in Upper Canada. Death or burial records for Nova Scotia and Halifax in particular could show if Davis the baker died there.

Beginning as purely online searching, Library and Archives Canada's "Upper Canada Land Petitions 1763-1865" database had nothing for a Benjamin Davis. The index is quite comprehensive and the petitions are digitized although it's a bit of a roundabout hunt to find a specific document. The index also includes petitioners' names from a series of correspondence called Upper Canada Sundries.

The Nova Scotia Archives has indexed and digitized surviving death records 1864-1877 (there's a long gap until the series resumes in 1908). I found a Benjamin Davis age 98 who died 14 September 1874 of old age in Liverpool, Queens County.[1] He was born in Wales and the informant, Alfred Fraser, did not know the names of his parents. Also, Benjamin's occupation was not filled in.

Several things nullify this being the man Stephen Davidson mentioned. The Halifax baker was portrayed as active and practising his trade in Boston in 1776; that is the approximate year the Nova Scotia man was born (if his age is accurate) and virtually eliminates his being the Loyalist baker. Liverpool in Nova Scotia is obviously not Halifax, although there's a chance a move had been made to the town on the south shore, some 150km from Halifax, one scenario being an elderly man going to live with a caretaker. "Born in Wales" is an interesting addition. This Benjamin could have emigrated to Canada or the United States at any time during his long lifespan; he could have come as a British soldier, or as a child with his parents, or at any age.

The likelihood is strong that more than one Benjamin Davis lived in Nova Scotia. A man of this name was part of a group petition in 1785 at Digby, requesting 5,000 acres each at Bay of St. Mary's near Port Roseway (petition was "approved").[2] It's most likely the baker died before Nova Scotia began keeping regular vital statistics. I delayed searching for the baker's potential marriage in Massachusetts for the time being.

As for the Upper Canada man, one armchair source quickly led to another. Merely viewing the index to Filby's massive Passenger and Immigration Lists 1500s to 1900s showed more than one Benjamin Davis milling around in early Ontario.[3] Keith Fitzgerald's Ontario People 1796-1803 based on the district Loyalist rolls has a Loyalist reference.[4] That source is no doubt the basis for a "Benjamin Davies" listed in the UELAC Loyalist Directory (http://www.uelac.org/Loyalist-Info/Loyalist-Info.php) with no details. 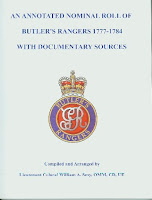 Turns out my Benjamin Davis had history with both Sir William Johnson and Butler's Rangers.[5] Lt.-Col. Smy's remarkable compendium of Butler's Rangers tells us more about Benjamin Davis. In brief, he was the son-in-law of Nicholas Phillips Sr., UE, from Pennsylvania. Before the war, Benjamin had 150 acres on the Mohawk River near Sir William; he served throughout the war, ultimately as a sergeant, in various capacities; he was granted land on the Humber River, York County, in 1796. To illuminate Davis' service record, Col. Smy clearly accessed a great deal of cited manuscript correspondence and memorials in the British Library, Library and Archives Canada, and the Archives of Ontario.

And yet ... no Upper Canada land petition? Strange. Benjamin was eligible for a substantial land grant ― which he did receive but apparently without the usual process. There are indeed land petitions from his wife Elizabeth Phillips Davis in the above-mentioned index. I expect his marriage took place in the Town of York, logically where New York boy met Pennsylvania girl. Benjamin also submitted a memorial to the claims committee for his and his wife's losses of American property. So a number of land-related and other sources could be explored.

A random exercise? A fool's errand? ... leading to several men of the same name. Let me be plain: this is not an exhaustive study for Benjamin Davis of York Township, York County, Upper Canada. Going on to fill out his portrait with original documentation is not particularly my story to tell. And yet, here is a Loyalist with no children, no descendants to speak for him. It makes me wonder if other Loyalists without issue are still equally obscure. Comments ~ naturally ~ are always welcome.