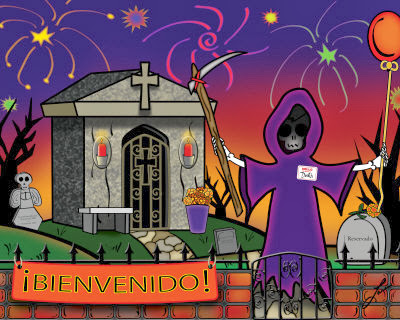 Do you know where your ancestors are?
Are you ready for All Saints' Day and All Souls' Day?
Posted by BDM at 10:19 1 comment:

More catchup. Really, I am taking this seriously. Hats off to those who are diligently keeping up! Julie's prompts are making me realize where photographs of yore are regrettably missing.

Prompt Four: Seasons.
SUMMER. No contest. No ambivalence, no waffling, hands down the winner. 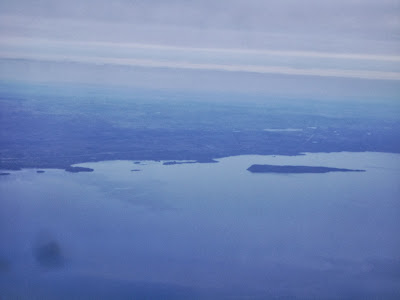 If you lived in Thunder Bay at the head of Lake Superior, you annually waited ten months for the magic of summertime (about six weeks long, although some like to say it lasts only two). People decamp from the city for their summer camps, meaning "cottages" or "cabins" in other cultures. Liberation! Kids go wild, barefoot, sunburnt (olden days, obviously), blissfully running their own agendas. There's just the lake, our boats, our bikes, the baseball teams, and sleeping in tents if we feel like it. Parents are also chilling out with few responsibilities other than hauling their refrigeration needs from the ice house at the tiny nearby store and ensuring the honeyman comes by the outhouse regularly.

Then you move to a new camp that has indoor plumbing! You get to be a teenager, play spin-the-bottle at wiener roasts, have romances with young pups who are learning to drive cars, what more could anyone possibly want. Then you get your own kids and one hundred years of tradition at Amethyst Harbour go on ...

SUMMER also included, from time to time, Banff, Alberta. The Banff School of Fine Arts, as it was known then, was a vibrant summer community of young musicians, singers, dancers, actors, and theatre students. Lots of socializing, despite curfews; introduction to the pastry called butterhorn, riding the Hoodoo Trail, sunrise on a mountain (was it Sulfur Mountain?). But we worked our butts off: in a six week period, each part of the program mounted a full production.

On to Prompt Five, Your Childhood Home.
My first home was at the top of a hill on North Court Street in Port Arthur, an awesome hill for the winter toboggan. Mysterious photo from unknown source. It's exactly the shape and design of our house which was red brick; possibly the house next door? My Dad built a playhouse in the backyard and my Mom painted murals on it. Sadly, no picture of my house itself. Some time later the homes along the ridge were torn down to allow an extension of River Street and the building of a medical clinic. 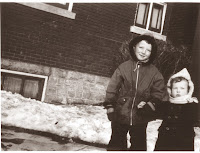 An old family photo of my best buddy and little brother proves the red brick. Did someone add siding after we left?

My second home was our farm on Oliver Road, a one-plus year sojourn while our new city house was being built. Again, no photo! Whatever happened to the one of me on Mickey the pony ... I recall he was faintly terrifying. A Yorkshireman called Arthur was the livestock handler (mainly egg-laying hens and some dimly recollected horses and pigs). Horrendous amounts of snow in winter. Commuting by car five miles to Pine Street School in town. Mom hitting a moose in her Chev and for months thereafter driving white-knuckled after dark like five miles an hour, an impatient procession of cars behind us. 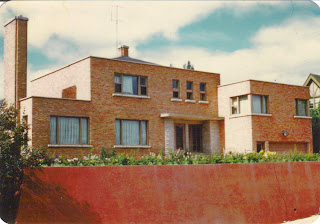 Third home on High Street, Port Arthur, was sort of po-mo and very roomy but had a few inexplicable things. The pink retaining wall clashed with the brick colour. The always-frigid upstairs bathroom. The unfinished bomb shelter in the basement (hey, this was the Cold War 50s). My Dad built the entire basement "rec room" basement area himself. 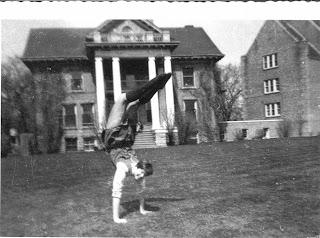 Fourth home (when does childhood end ... ?) was Balmoral Hall, my home away from home, secondary education years. In effect, the school then partly functioned as a residence for Royal Winnipeg Ballet students. I loved my time there, but after four years I was ready to move on.

The "homes" all pale in comparison with SUMMER on the greatest lake in the world and the greatest place to be on that lake.

It's time to update an item about my nemesis George Porter (thanking my stars he's not MY ancestor). For an essential backgrounder, see my post several years ago about "Berkeley Castle."

George certainly didn't know it, and no-one else seems to know it, but archaeologists are calling his Town of York cabin "Toronto's first house"!!

In a CBC TV news item aired 24 September 2013 archaeologist Keith Powers referred to the site with its evidence of an underlying log structure as the first house in Toronto (meaning York, Upper Canada). Yup, not one of, but the first house. Archaeologists were excited to reveal their findings last month at a construction site on King Street East at Berkeley. Online news outlet BlogTO followed with the story a week later. The property under construction is for the new offices of The Globe and Mail.

The site is heavily barricaded at street level but BlogTO gives us a peek at the stone foundations of Berkeley House, home of John Small (1746-1831), clerk of Governor Simcoe's executive council. Archaeologist Powers says Small purchased the site in 1795 with a log cabin already on it. "A fishing cabin." ... Not exactly!

But yes, indeed, the purchase was 31 August 1795 for a sum of $50.(1) But no-one mentions that it was George Porter's log house (for that sale price he had also agreed to shingle it for Small). George was a productive, in-demand carpenter from the earliest days of building York; I doubt he considered his house a fishing cabin. George was in York for such a relatively short time, his name has been almost lost; whereas John Small was a firmly planted member of the establishment, a top ranking civil servant. So the log house likely predated 1795, possibly back to York's founding in the summer of 1792: after all, the busy carpenter had to have a place to live for three years while while employed in town construction.
The transfer from Porter to Small is outlined in minutes of the executive council's land committee, in Small's petitions submitted after the fact.(2) Awaiting government delays in confirming his location, Small lived in the log structure adding improvements; his plan was to use it as a stable when his new residence was finished. By 1795 the parliament buildings aka Government House, Small's place of work, were located diagonally south across Palace/Front Street, only a few steps from his residence.

In the 1840s, son Charles Coxwell Small added more wings to the house. For reasons unknown, he incorporated the old log dwelling:(3)

"When reconstructed at a subsequent period, Mr. Charles Small preserved, in the enlarged and elevated building now known as Berkeley House, the shape and even a portion of the inner substance of the original structure.”

Charles and family lived for many years there in one of Toronto's showcase homes; his wife made what is probably the earliest sketch. Berkeley House became derelict in the next century and was demolished in 1925.


Let's ensure we keep the history straight. Even if he is a most annoying man (as my previous posts demonstrate), George Porter's name should be attached to "Toronto's first house" !