Not the person. The place! Now to correct the record. A tale of joy, misery, and redemption.

Five years ago I wrote about a bucket list visit ‒ St Petersburg. My affinity for this storied Russian city comes from my grandmother Marija's time working there at the turn of the nineteenth century, up until about 1908. Marija was a trained seamstress. 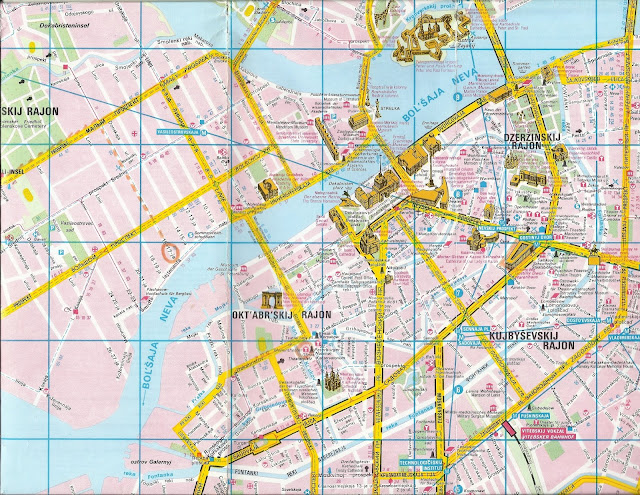 A land tour in 2006 had us lodged for a few days at the Pribaltiskaya Hotel on Vasilievsky Island, which is across the River Neva from "downtown" St Petersburg. My lonely mission then to find where Marija had lived was successful. To a degree. I knew she worked for and lived with the Baron Kusov family; their mansion was located at the river's Embankment and Liniya (Line) 17 (see small orange circle). For our intents and purposes, we will say the Vasilievsky Lines run north and south. The taxi driver who took me there (with the address carefully printed for him) was little help, not having any English.


What I thought was the former mansion of Baron Kusov on the west corner had been covered in scaffolding at that time. Rather disappointing. It's a four-storey institutional-looking building, what I could see of it. The only word I could think of was "Babushka!" pointing at the building and pointing at myself. Repeated jubilantly for emphasis. "Me Babushka!" The taxi driver got it. And urged me to take plenty of photos, even led me across the busy street to get more inclusive views. Notice a glimpse of the opposite corner.

This year on my second visit, bussing from the cruise port took us right along the relevant section of the Embankment and the corner of Liniya 17 several times. Each time we passed I would frantically snap pictures through the bus window, calling triumphantly each time, "Got it!" I learned that this part of the riverside street was called Lieutenant Schmidt Embankment. There are many large official buildings along the entire stretch of the Embankment—which itself has different names for various sections―such as university and government departments.
So, 2019 photos from a bus window: 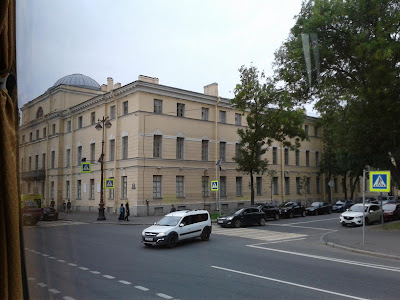 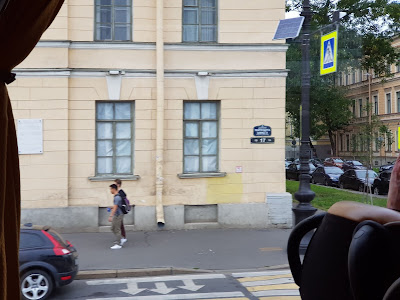 Fast forward to weeks later, at home. My trip-companion, experienced online researcher, discovered that this building on the west corner is part of the huge Russian Naval Academy complex. Indeed, when you examine photographs and aerials, the Academy building extends an entire block along the Embankment. You can see a dome in the middle of the building complex. Not a private mansion. Not the Kusov home. In fact, not even the corner of Liniya 17! 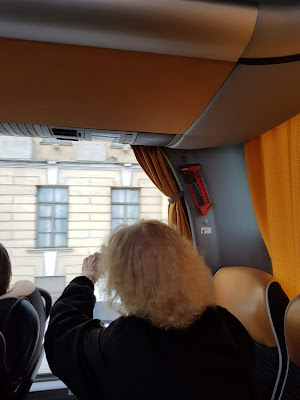 There I'd been, practically hanging out the bus window, aiming at the wrong corner. More photo examination. What else could I produce from 2006 or 2019? Then hindsight. Why had I fixated on the west corner? What about the other corner (glimpsed from across the street in 2006)? From my 2006 collection was this: 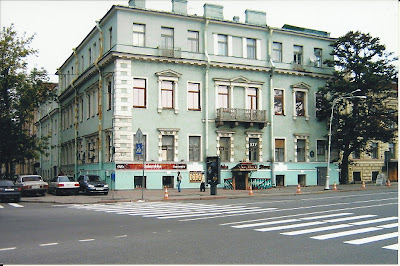 It was the only other building I had then captured from across the Embankment street. This is the east corner of Liniya 17. Does this not look more like an aristocrat's former home than the other corner? Notice the name on the lower floor commercial premises. Babushka! The coincidence was too rich. A rather large souvenir and crafts shop. Is it possible that this was the Baron's home? Had the taxi driver been a lot smarter than I?

Google Earth and Google Maps were employed to the utmost. It took a great deal of patient searching to establish what buildings were on Liniya 17 and compare my old photos and our new photos with online reality. First belated discovery: Liniya 17 is merely one side of the street and the opposite side is called Liniya 16. Babushka sits at the corner of the Embankment and Liniya 16. Scratch that possibility!


Second belated discovery: My hired researcher way-back-when had given me Baron Kusov's address from the 1910 Directory of St Petersburg: No. 2, Liniya 17, Vasilievsky Island, "owner of the houses (5 houses)." Not that I could read the Russian, but that was his translation. 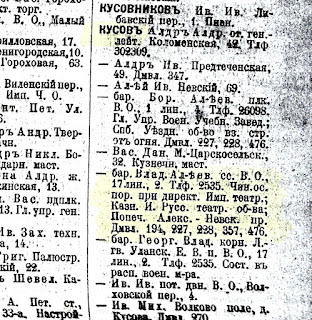 Oh-oh. Brenda had totally forgotten she'd been given a house (or block) number: TWO. Were we needing to look at the house past the corner of Liniya 17? I'd unwittingly photographed it in 2006, there on the side street where the scaffolding stopped. A good photo of the workmen's dumpster. Yes, this two-storey building seems to be separate from the corner's four-storey building.

Then more enlightenment from Google: 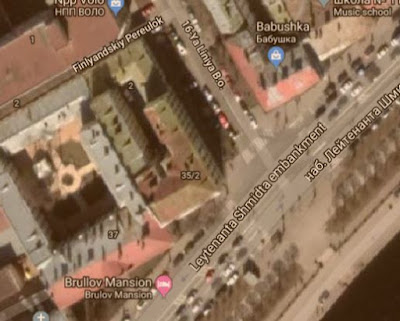 Number 2 on Liniya 17 is an L-shaped building that extends down a skinny little street called Finlandskiy Pereulok. Pereulok = side street. And sure enough, storing up my confidence, the buildings on the next block are addressed 4 - 6 Liniya 17.

Alas, the Google camera apparently did not venture down that skinny street. Will we ever capture the slightly longer side, the face of the building on Finlandskiy?!

Nonetheless, as Higgins shouted in My Fair Lady, "I think she's got it!" Perhaps it looked like a small mansion, or town home, more than a century ago. It has been extremely difficult to find any information about Baron Vladimir Alexeyevich Kusov. Despite the offices he held by Imperial favour, the man kept a low profile ... at least in English-accessible Russian websites.

The mission started with a blooper, morphing into a painful lesson, faintly along the lines of the cobbler's children having no shoes but more like extract every piece of information from your sources. I'd say, St Petersburg is clearly not done with me.