That’s kind of a fake title to make the post inclusive of part cemetery, part travel, part religion, by an amateur in most subjects. In most of my travels I try to photograph or at least make note of cemeteries and burial customs in different countries, but it’s not always convenient to say “Stop the bus!” or “Stop the airplane!” when something interesting crosses the horizon.

The most unique burial ground I have ever seen is the Ganges River in India. A city called Varanasi on Mother Ganga, as the river is known there, is probably the holiest site of the Hindu religion. Northern India has experienced a drought for three years and the Ganga is one of the victims. Today, the flow of the river barely reaches the bottom of the Varanasi ghats (the steps down to the river bank) and there’s some mud involved. The city is thousands of years old as an inhabited settlement, long devoted to one of the forms of the god Shiva. Pilgrimage to Varanasi and bathing in the waters of the Ganga, alive or dead, will purify the body and assist in releasing one’s soul from the endless cycle of what we call reincarnation. Every day hordes of the faithful are immersing themselves in the holy waters. Men will strip down to the essentials but women enter fully clothed. 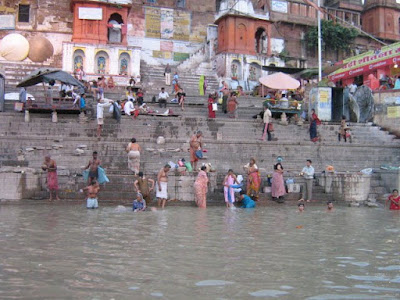 In Varanasi thousands of burials take place weekly by cremation. Many people come here to die so they are close to the river, or their corpses are brought from all over the country. The eldest male in the family as chief mourner takes charge of the purification arrangements. They include a fee for the use of a burning-ghat and a price for the necessary firewood from the ghat owner. We witnessed dozens of the rituals after dark at different stages. Out of respect, photography was a no-no. The bodies, clad in colours indicating male or female deaths, are first dipped in the river and then placed on individual fires. Mesmerized, we were told it takes 3-4 hours to burn a body to a smallish lump which is then consigned to Mother Ganga. A sunrise trip on the river confirmed the detritus of a culture dependent on the river for garbage disposal, sewage, laundry, and drinking water. Dead animals and unburnt bodies (such as young children) are part of the cycle. 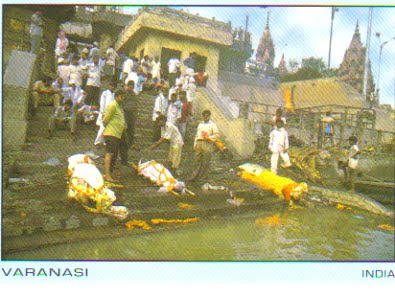 Varanasi Postcard, pre-cremation purification. Our local guide, aptly named Krishna, informed us up front that he was a descendant of the warrior caste in Hindu society. Caste identification seemed important for almost every local guide we encountered. No doubt sensing our North American attitudes toward hygiene, Krishna explained in practiced fashion the results of a scientific experiment (bear in mind my lack of scientific terminology and general grasp). If you put a cholera bacterial strain into a bottle of “pure” water, it will take 24 hours to break down the toxins. If you place the same cholera strain into a bottle of Ganga water, the toxin will break down in three hours. “Break down” seems to mean made ineffective. The logic of this perforce lesson hovered uncertainly over our heads. I noted puzzlement on the faces of even medical and engineering professionals amongst us so I did not feel the only dunce. 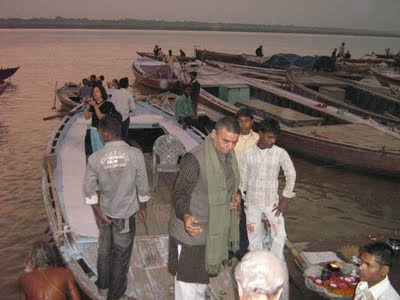 Krishna (above) also explained that the extremely wealthy owner of the largest, most popular burning-ghat was an Untouchable, a word now outlawed. Ghandi effected legal changes to caste discrimination more than 50 years ago, but cultural habits are alive and well. Krishna said the forbidden word “Untouchable” several times, not masking his contempt for a man who was the lowest of the low—that he profited from death seemed to be a secondary consideration. Reminded me somewhat of the solitary and often anonymous life of hangman executioners.

For a more colourful take on the situation, you could visit Mark Moxon’s Travel Writing. GeneaBloggers may ask if these deaths/burials are recorded in the state (Uttar Pradesh) archives. Sorry, the pall of wood-burning smoke and incense totally clouded my left brain. 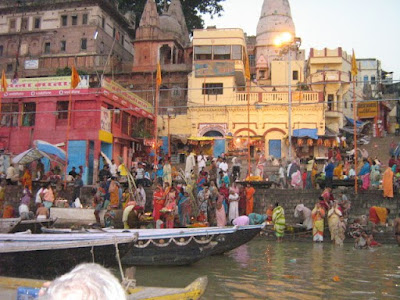