Schools were set up to train not only pilots but also navigators, mechanics, wireless operators, gunners, and so on. Thousands of young Brits, Canadians, and even some Americans were processed here, swelling the population of the communities they briefly joined; a significant number of men returned after the war to settle here.

Admittedly, this post relates to my own family history but possibly of interest to others. The British Commonwealth Air Training Program (BCATP) 1940-1945 was a widely- and well-organized home effort in Canada (it was also active down under in Australia and New Zealand). We seem to hear little of it in regard to military matters that affected our ancestors ― and yet there it is on the Veterans Affairs Canada website: http://www.veterans.gc.ca/eng/remembrance/history/second-world-war/british-commonwealth-air-training-plan.

Civilian participation was crucial in the beginning; local flying clubs and experienced flying instructors were the first to mobilize. In many cases, new airfields had to be constructed. The Plan quickly grew into Canada's major role of the Second World War under the administration of the RCAF, with 231 sites for schools around the country at its height. It was so successful at graduating aircrew that by 1943 they had to pull back somewhat.

The organized training of a successful air crew candidate would take between 50 and 90 weeks, often depending on the demand for various types of air crew which altered at different times. After recruitment, participants were sent to one of an eventual total of seven Manning Depots for an introduction to military life. It was here their path for aerial training was determined.
Those chosen for pilot training then proceeded to one of seven Initial Training Schools (ITS) to take part in a ten-week course in pre-flight training. From here, pilot trainees were posted to one of 30 Elementary Flying Training Schools (EFTS) (operated by government-supported civilian Flying Clubs across Canada) for eight weeks of flight instruction.
After soloing on Moths or Finches and an assessment of whether pilot aptitudes would be best suited for single-engine fighter, multi-engine bomber or transport, the successful neophyte headed off to one of 29 Service Flying Training Schools (SFTS) -twenty of these were twin-engine schools- for advanced training on more powerful aircraft. It was at the successful completion of this course that pilots finally won their coveted wings.[2]

The family connection is with Elementary Flight Training School (EFTS) No. 2 at Fort William, Ontario (since incorporated with Port Arthur to become Thunder Bay). Hector F. Dougall had been the first president of the Fort William Aero Club, later named the Lakehead Flying Club, and became civilian manager of the wartime school. It was designated No. 2 (Malton, Ontario, was No. 1 ― now the site of Toronto's Pearson International Airport) thanks to wartime Minister of Munitions and Supply, C.D. Howe, who happened to be Port Arthur's MP.

I knew little about this period in Thunder Bay: DeHavilland Tiger Moths were used for pilot training. Some thirty machines were always operational, housed in two purpose-built hangars.[3] The runways were the flying club's original grass strips until 1943. In 1941, Dougall posed with official visitors. The middle uniform is HRH Prince George, Duke of Kent (1902-1942), at the time an air commodore in the RAF; he was a pilot himself and strongly believed that aviation proclaimed the future. The Duke was to die a year later in a plane crash. 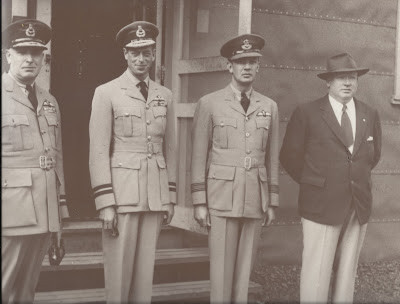 Could I learn more? RCAF records seemed to be indicated; they are held at Library and Archives Canada in the former RG 24, now R112-522-X. But many of the EFTS's microfilmed daily reports have been digitized on Héritage (http://heritage.canadiana.ca). No name indexes here and no list of contents ... you will have to scroll patiently through the chronological daily reports and other items. The access path is given below. I would like to hear if anyone else has good luck!

EFTS No. 2 was on microfilm reel C-12336, officially opened on 24 June 1941 with an agreement between the RCAF and the civilian operating company, Thunder Bay Air Training School Ltd. The Air Force supplied planes and relevant equipment, office furnishings, accommodation for their supervisors, and the like. The company provided flight instructors, clerical staff, the "operating and maintenance of aircraft and equipment," and contractors for building runways, barracks, and necessities. It seems to me from the accumulated context that the company also acted as a liaison between the school itself and the two towns it bordered.

At first CSO Johnson's reports are perfunctory ― weather good, flying this morning, ground studies this afternoon. By the spring of 1941 they develop into detail about who "washed out" or who graduated to an intermediate level school. Much internal business about scheduling, personnel changes, examinations, sprinkled with names. There is constant turnover of trainees, plus repairing and upgrading the facilities. Visitors are noted; crashes and collisions by trainees are described; familiar local names crop up as visitors, facilitators, contractors. Much excitement when Oxford training planes arrived.

Company president Dougall is mentioned here and there, at one point earning the undisguised admiration of the CSO and numerous witnesses by physically ejecting from the site an obnoxious employee. Recreation for the trainees included a weekly dance hosted by local young ladies. Other activities included "deck tennis," horseshoe pits, softball, football, a rifle range, weekly movies and dances, concerts, and swimming at Boulevard Lake or the YMCA. Billiards tables, bookcases, books, and more were donated by the towns.

The school produced a newsletter called The Thunderer with a lot of frat house-type content frowned on by the CSO as "an undesirable form of wit". Rivalry between RAF and RCAF candidates became obvious in sports and the social scene; hints abound about some rather "riotous" graduation celebrations. It strikes me that they were fond of poetry (and composing doggerel). These men had an intense but exhilarating time, never to forget their training days. "The Spirit of Thunder Bay" was one of many poems. Here are the last two stanzas from "Ave Atque Vale Coursus" by "Howdy" Sutton in Vol. 1 No. 4:

Now you leave this place,

And we here know, that in the race

To strike the blow For Liberty and Grace,

Your names will show.

God speed and Luck we say,

And hope we all, on a certain day

You will recall, that spot called Thunder Bay,

Where we were friends.

The Duke of Kent arrived in a Lockheed aircraft on 19 August 1941, a visit timed with military precision for two or three stops in the area. Among the UK accompaniment was a Scotland Yard bodyguard. Senator Paterson lent one of the four cars for the occasion. Met by squadron leader Johnson and higher BCATP officers, the Duke inspected the Honour Guard, was presented to Dougall who introduced civic dignitaries, and quickly toured the facilities. He did manage a private "interview" with Dougall, but altogether the royal visit was cut shorter than expected because Port Arthur Ship Building Yards had been added to the itinerary. Johnson's report refers disparagingly to the Port Arthur mayor obliviously creating an unforgiveable delay: "Mayor Cox having organised, rather disgracefully, a tour of the hill city."

The access path to these fascinating records is:
Library and Archives Canada (http://www.bac-lac.gc.ca/eng/Pages/home.aspx) > Online Research > Military Heritage > War Diaries, Ship Logs and Operations Record Books > Air - Second World War (1939-1945) and Korean Conflict > Advanced Archives Search where you note three search-term boxes. Enter 24-104a in the first box and a location (e.g. Fort William) in the second box (24-104a is the LAC Finding Aid to the collection). This should give you the archival description, the volume number, and the microfilm reel number for your chosen location, assuming a BCATP facility existed there. You might receive more than one result. Now you are ready to see if Héritage has digitized the material you want, by entering the microfilm number into their search box at http://heritage.canadiana.ca.

Besides the obvious ― such daily reports may include in-house newsletters ― where else to look? Ceremonies were held for the openings; adjacent towns welcomed the new arrivals with social activities; tours were often given ... think local newspapers and aviation club histories. Municipal archives and town museums are another possible source of information. In addition, perhaps of interest:

▪ Brandon, Manitoba, has the Commonwealth Air Training Plan Museum (http://www.airmuseum.ca/). The website is featuring Vignettes of the schools and related wartime memories for Canada's 150th anniversary. Another research project is gradually adding daily reports of the BCATP training schools from the RCAF digital images at Héritage.

▪ The archival catalogue of the Canadian War Museum is not online at this time. They do have some BCATP periodicals of the wartime period (also many artifacts and photographs), but best to contact their Research Centre for a search: http://www.warmuseum.ca/learn/research-collections/.

▪ The Bomber Command Museum of Canada at Nanton, Alberta (http://www.bombercommandmuseum.ca/main_museum.html), commemorates servicemen and aircraft of the bomber command and BCATP.

▪ National Air Force Museum of Canada (http://airforcemuseum.ca/en/) in Trenton, although it does not specifically refer to BCATP in its online collections.

Whether you have a Canadian or British airman ancestor, or maybe a civilian employee at the schools, the BCATP might provide a glimpse into a brief but important window of his life. I am extremely grateful for the expertise and patient assistance of noted military historian Glenn Wright in this endeavour.