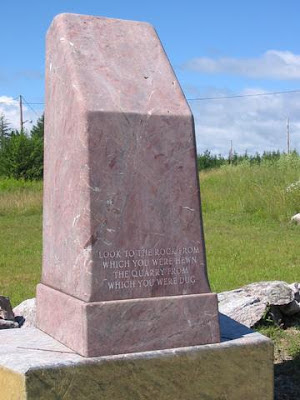 This spectacular pioneer memorial is at River Denys, Nova Scotia, dedicated to the dozen or so "founding" families of this rural settlement on Cape Breton. Most of them were immigrants from the western islands and coast of Highland Scotland.

I think it's spectacular because of the unique red marble from the nearby once-famous Marble Mountain quarry. To the untrained eye it looks pink, but red is its name. The quarry provided a livelihood for hundreds of families in the 19th century ... when farming and fishing did not suffice. Hard physical work as it must have been, it likely claimed far fewer lives than the Grand Banks where every generation lost brothers and fathers.