Thanks to this man I was able to extend one of my Fraser lines several generations into the Perthshire area of Scotland. Both parents of great-grandmother Catherine Fraser were un-connected Frasers. My serendipitous moment was finding a newspaper death notice for Catherine’s mother (Nancy). Among other pieces of identifying information, the notice stated that Nancy was the sister-in-law of Dr. William Fraser of Montreal. Nancy Fraser’s husband John Fraser, who died young, was William’s brother. Almost nothing is known about John Fraser other than he was a blacksmith at St Andrews East, Quebec, and he fathered four children. Exploring sources for a public figure like a doctor made it possible to learn more about the origins of the two brothers in Perthshire, Scotland.

William Fraser received his medical licence in 1834 from the College of Physicians and Surgeons in Glasgow, Scotland.(1) His brother John the blacksmith was already living in St Andrews East, married, and starting a family. That year, William decided to emigrate to Canada and was appointed Apothecary at Montreal General Hospital.(2) After continuing studies, he graduated as an M.D. from McGill University in 1836.(3) Thus began his long association with both the hospital and the university. On 4 August 1840 William married in Montreal Miranda R. Charles, daughter of the late John Charles and Lucille Lebrun.(4) For almost 25 years he held the chair of Institutes of Medicine at McGill. He died 24 July 1872 in Montreal.(5) When his widow Miranda died in 1891, there is some unconfirmed hearsay that she bequeathed her Charles family residence to the university.(6) Their large monument in Mount Royal Cemetery records his birthplace as Killin, Perthshire.

Preliminary research using the International Genealogical Index (IGI) for the Old Parochial Registers of Scotland was encouraging. William Fraser was baptized 23 March 1810 in the parish of Killin, son of Duncan Fraser and Catherine Robertson. His brother John was the oldest child, baptized 12 April 1808. They had other siblings: Robert (1812), Margaret (1815), Duncan (1817), and Donald (1819). The parents Duncan and Catherine married in Killin on 18 July 1807. Duncan’s baptism also occurred there on 24 January 1783, son of John Fraser and Janet Buchanan. This last John Fraser may be the son baptized in 1751 to Duncan Fraser and Margaret McKerchar. Not a bad beginning for pedigree drafting! Correspondents tell me that many Frasers migrated to Perthshire from the Highlands after the rebellions of 1715 and 1745. 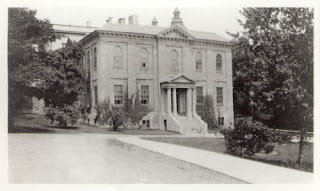 Of Dr. Fraser, it was said “He began life as a very poor man, but by sheer doggedness he eventually built up a most prosperous practice, starting with a small drugstore on McGill Street. Plain in manner and with no pretence at any oratorical ability, he greatly impressed his students with his earnestness and common sense.”(7)

Brenda, I stumbled across your webpage about Dr William Fraser and was so excited. He was my great-great-grandfather Donald Fraser's brother! Donald married in Stirling, lived elsewhere in the county then returned to Stirling where he lived until he died on 10 June 1880, aged 62. I have always wondered about his brothers. Of the three sisters I know of, I have researched Margaret, who also married and lived in Stirling, and the youngest daughter Janet born c1828/9 who lived and died in Killin in 1902. Although found nothing about Elizabeth born 24 April 1821.

I knew nothing of Donald's brothers John, William,Robert (except he also was a blacksmith), Duncan until I read what you wrote about Dr William Fraser. Always wondered if they emigrated. Their father Duncan Fraser's blacksmith business became that of his son-in-law, a blacksmith who married Janet Fraser.

I have found nothing of my g.g.g.grandmother Katharine/Catherine Robertson, she was not on 1941 census, presumably dead by then. Possibly after birth of Janet, about 7/8 years younger than Elizabeth born 1821. Nor have I found anything about g.g.g.g.grandparents John Fraser and Janet Buchanan other than six children.

I had also wondered a if Duncan Fraser and Margaret McKerchar "may be" this John's parents...

I have done a lot of research on the Fraser's but harder with the earlier ones. Have always wondered if further back in time they came from Inverness=shire or Ross-shire.

You may know that Donald was a teacher, then some years later a railway clerk, was the father of John Fraser who was my paternal grandmother's father - she was Jane (Jeanie) Fraser. I had always thought he was born in Stirling then discovered elsewhere in Stirlingshire although spent msot of his life in Stirling.

To see the familiar names appear as I read what you wrote was so exciting, and to see a photo of William was a bonus! I have no Fraser family photos. My father and his mother told me nothing of the Fraser family, all I knew was my grandfather's name, John Fraser. Nor did I know their roots were in Killin, although out of the mists of time have a memory of my father mention a Killin connection.

I am blethering. Sorry. Would love to hear from you.

A Guid New Year to you.