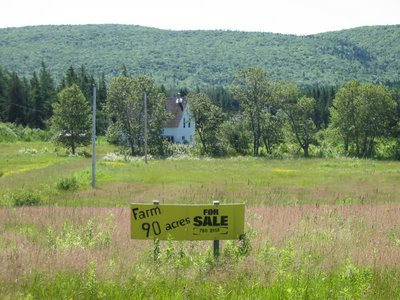 Maybe you’ve noticed signs and properties like this on one of your country drives. Abandoned farmhouse ... a rather wistful, weathered sign announcing its availability. Did that seller get many phone calls?

The Carnival of Genealogy 55th edition called for “Show and Tell.” Since I’m slowly working on my ancestors of Cape Breton, Nova Scotia, could I find something to SHOW that would fit the theme without disturbing the way I want to unfold the overall TELL on my blog? You betcha.

The photograph is a hot sunny day at River Denys, Cape Breton in 2006. The farm for sale is the homestead of my ancestor Hector McFadyen. Seeing it was a significant moment. At the same time, it struck a pang of loss.

We found ourselves wading through thigh-high grass and daisies down a long lane to Hector’s home. To my gratification and some surprise, we had been able to find the exact location. Although we were armed with the old Crown grants map and the current road map, we might not have found it without the friendly assistance of some local McLeans who grew up in a house across the road! Road map notwithstanding, the River Denys area is riddled with winding roads, mysterious to us “from away” who re-traced a few of them more than once! 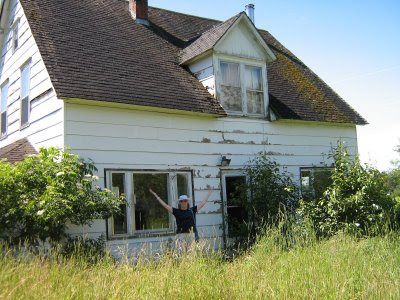 To our dismay everything had been abandoned for many years and the house, typical Nova Scotia frame construction, was in dire need of repair. Was this Hector’s original home, possibly built in the 1830s or 1840s? I’m no expert on historical architecture but we could see the outside entrance to the old root cellar beneath the kitchen. At a drive-by glance you wouldn’t know the River Denys is its southern property boundary. I’m told it was a bit unusual in those days to set a farmhouse so far back from the road. I hope Hector had some cattle and sheep.

To date, very little information has surfaced about my ancestor Hector. My previous McFadyen blog (Part 2, 21 August 2008) gave an introduction to this transplanted Highland family. Briefly, the passenger list for the ship on which Hector’s family emigrated said he was age 19 in 1828. In Cape Breton, he married Jessie MacKenzie before 1837 which is merely the approximate year of birth for their oldest known child. His date of death and place of burial are unknown, although Jessie was a widow in the 1871 census. Census and vital records for Nova Scotia are intermittent, at best, for most of the nineteenth century—a long story made short. I know from correspondents with firsthand knowledge that the farm remained in descendants’ hands until the mid-twentieth century. 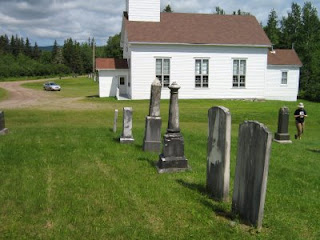 River Denys is a hamlet in the sense that there is no obvious central gathering place now, such as a community centre or general store. Homes and farms are strung along the river from its source on River Denys Mountain to River Denys basin where it enters Bras d’Or Lakes. What is now Forbes United Church is on the site of the Presbyterian congregation’s first building where Hector and his father subscribed to provide a stipend in 1830 for the first minister. A fire destroyed the earliest records of the congregation’s vital events. The burial ground on both sides of the church site has few visible gravestones—none to see for Hector and Jessie, or any McFadyens. 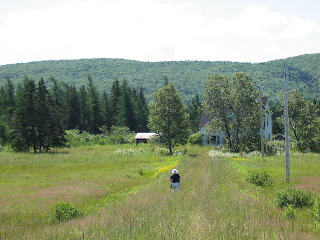 A neglected, almost forgotten family farm. How did this sad pass of affairs come to be? Well, there are clues in the economic and occupational history of Cape Breton, and inklings in family memorabilia and correspondence. Brenda's bank account was not up to buying property!

Photographs by BDM and CBM in family collections.
Posted by BDM at 21:46

Nice photos of your old family farm, Brenda, thank you. I felt much the same way about recent photographs of the home which my gg-grandfather built around 1875, shown in this post
http://photo-sleuth.blogspot.com/2008/04/hardys-starbright-in-bottle-for-family.html

manoj said...
This comment has been removed by a blog administrator.
Wednesday, 29 December, 2010