Remembrance Day in Canada 2008 marks the 90th anniversary of the ceasefire on the Western Front in Europe. Armistice Day 11 November 1918 marked the finish of “The War to End All Wars.”Apparently we were doomed to repeat history.

On that day in a German prisoner-of-war camp in Holzminden, Lower Saxony, captured British and Colonial officers were already aware of deteriorating morale among the camp guards and some disarray in the German army. Rumours had been flying of impending German surrender and peace. But prison life was generally consumed with getting enough to eat and how to escape. Escape was considered a duty and was never far from prisoners’ thoughts. One of the most famous and daring escapes of the war occurred in the summer of 1918 at this camp, later chronicled in The Holzminden Tunnellers by an eyewitness.

On 11 November 1918 in Holzminden, the rumours of Armistice had come true but it was not instant freedom for the prisoners. It would be another month before the men were entrained for “old Blighty.” During the long, anxious waiting period, the great political, military and social turmoil in Germany was evident. The hated, harsh camp commandant Niemeyer himself had seldom been seen lately. Later they heard he had slipped away in civilian clothes. Some prisoners were able to move surreptitiously back and forth to the town, on the lookout for “grub” and hoping to see their own troops arrive. But prudently, most prisoners decided their chances of getting shot were high if they tried to “hoof it” away through the countryside.

On 11 November 1918, where was my father? Let’s be accurate and say the man who would become my father. He was in the Holzminden camp, hungry and impatient like all the others. Lt. Hector Fraser Dougall from Winnipeg was a Royal Flying Corps pilot in 54 Squadron who was shot down behind enemy lines in France, in February of 1918.

In a satisfying act of defiance — remembering the lack of adequate medical treatment, the withholding of Red Cross parcels, the consignments to solitary punishment for his many escape attempts — he climbed to the top of the main camp building and “liberated” the camp’s enormous state flag. The Globe and Mail photograph.

Hector kept a secret (forbidden) diary during his capture time. He was marked as a “difficult prisoner” with a history of escaping while being shuffled from one prison to another. I mention only two of many escape attempts that have been reconstructed by oblique diary references and later information from fellow prisoners. His final routing was to the supposedly top-security Holzminden. Despite the heavy complement of guards, he and another man jumped from the train along the way. This particular escape attempt lasted over two weeks’ time and came heartbreakingly close to success. When German soldiers caught them and were about to fire on his companion, Hector deflected their attention, allowing companion Williams to make good his escape. Hector’s fate was solitary confinement at Holzminden. Sedley Williams’ subsequent letter from England to Hector’s family expressed his enormous gratitude and described their adventures in great detail.

Fellow airman from Winnipeg, William Stephenson (much later known as Intrepid), also joined the Holzminden gang by September of 1918. In mid-October he and Hector were two who set off on “a hike to the frontier.” Stephenson did reach Allied lines but Hector was recaptured, to be thrown into solitary once again with the threat of court martial. During a family visit in 1981, Sir William admitted that his successful escape to British lines was due to the diversion Hector created among the guards hunting them down.

In the interim period after 11 November, the prisoners experienced something like feast or famine. With German soldiers finally guarding the camp at the end of the month, many of the scrounged meals were cabbage and potatoes. Sometimes the prisoners could still venture to nearby villages to pay for indulgences like wine and meat — rabbit, sausage, duck and chicken are glowingly described in Hector’s diary — making the most of it when they could. Another escape plan came to naught. After a number of disappointing postponements, the prisoners received notice on the evening of 10 December to pack up and get to the train station. Their spirits soared. They celebrated with their hoarded bottles. Hector’s last diary entry mentions how that night the exuberant young men set a fire in the hope of burning Holzminden prison camp to the ground: 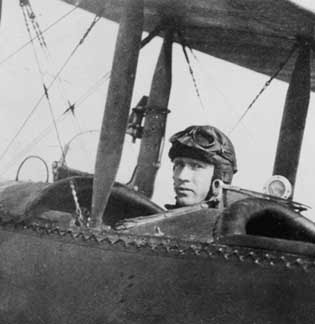 “They called out the Fire Department to put it out, and we cut their hoses to pieces. Everything smashed to pieces in the camp. Got beautifully drunk myself. So did most of the boys.” Family photograph.

Hector was 22 years old when he returned to Canada in January 1919. His diary is now in family possession, along with the Holzminden camp flag. More has been written or compiled about Hector in:
“Tales of Derring-Do: A Captured Flag” by Rod Mickleburgh in The Globe and Mail (8 November 2003);
“Hector Fraser Dougall RFC: A Pilot’s Account of the Great War” by Tim Dubé in Canadian Military History (Vol. 5, No. 2, 1996);
“Fiery Red Dougall, Camel Driver” by Brenda Merriman in Early Canadian Life (November 1979);
and a very special DVD created in the 21st century by Hector Fraser Dougall II that followed father Hector's 1918 diary route through France and Germany, visiting prison sites ... some of which the current residents were no longer aware.

Only 22 years old *after* the war. I already knew this story but it's hard to believe how truly young these men were.

Thank you for sharing your father's story. I am sure it makes November 11th more poignant for you.

I would very much like to know more about Holzminden and the time Hector spent there. I've so far documented over 300 POW'S from Holzminden Lager and Captain Karl Niemeyer.. in WW1, but am looking for more names..I have a twig of my family tree who was a POW at Holzminden, I live in Australia. you can email me direct if you like at jmac2005@tpg.com.au
We are trying to document all POW's (seem forgotten these chaps, the escape, the lives of the POW's both before, during and after WW1).
I have researched a bit on Hector Fraser Dougall..any snippet or a site for me to research would be appreciated...faces of holzminden is the site if you want a quick read..thank you.
Jenelle.

Thank you for sharing the sotry on Hector's time at Holzminden, I'm researching the POW's WW1 and Niemeyer at Holzminden for a book and movie (based on the Tunnellers of Holzminden), can I contact you direct, my name is Jenelle McCarrick at jmac2005@tpg.com.au

For readers viewing after I first posted this, an Australian team is preparing a film about the original "Great Escape" and a book of biographical entries for all known Holzminden prisoners. See www.facesofholzminden. com.