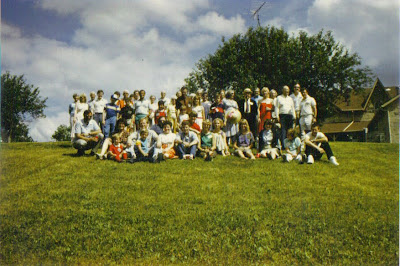 At the end of June 1984 the one and only (so far) DOUGALL family reunion was held at Finisterre Farm in Puslinch Township (near the city of Guelph) in Wellington County, Ontario. 1984 was the 150th anniversary of patriarch John Dougall’s arrival in Canada from Scotland, so launched the idea. This felicitous happenstance was created without the slightest idea of how a family reunion should be managed. Then ... there were no informative guidelines and booklets as are available these days.

The reunion was lively with those of us who already knew each other, and emotional in meeting cousins from afar. They came from Ontario, Quebec, Maine, Connecticut, Michigan, Illinois, Minnesota and of course the surnames varied widely. Besides DOUGALL we had Black, Blue, Jaeger, Kingston, Locke, Madsen, Maughan, Merriman, Molluso, Morrison, Turta and Watts descendants. The Scots weather gods cooperated beautifully.

Personal recollections of the event recall teenage cousins perched on the roof of the century stone farmhouse (learning to smoke dope already?) busily planning to re-visit in Manhattan. Our ultralight pilot was at the ready on the cornfield runway, thrilling the adventurous with flights over the party. A piper came to visit; what is a Scottish gathering without one? A large display table was where we shared memorabilia, with the circa 1866 photo of John Dougall and his wife Marion Hastie (see here). We asked people to fill out their parts of a huge family chart.

Our oldest-and-youngest acknowledgment went to Peter McAdam Dougall aged eight-four from Minneapolis MN, and Peter John Paterson Dougall aged four from Bolton ON, ... proudly bearing family heritage names. Honestly, we had some prizes for a few contests like this but whatever they were escapes me. 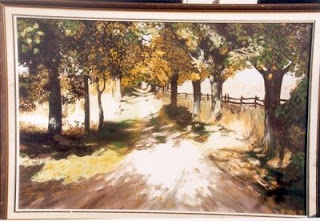 Everyone chipped in for expenses even though many were on their own dime for an overnight stay at a local motel. The said Peter M. Dougall, ever whimsical, dashed off a poem between his hotel in Toronto and his arrival in the wilds of Puslinch:

"We asked at the desk, 'Where’s Finisterre?'
They said, 'It’s not here, it’s way over there!'
We followed instructions and got here, you see,
Signs pointed to chez les trois jolies jeune filles.
We owe our thanks to our genial hosts
And all their helpers, including fence posts.
Though some of us came from far away
We’ll always remember this family day.
So let’s raise a glass and blow the bugles
For everyone here, we’re toasting the Dougalls!"

Family photograph of "Lane to Finisterre Farm," a painting by CLDM c1980.

How lucky you had a reunion, I have never been to one. Maybe because my family has never had one. Thanks for letting me visit yours!

I too have ancestors that came to Argenteuil County Quebec, mine from County Monahgan Ireland. My Raeburns were there'somewhere'in the area around 1842-1848. I have not had luck in finding much in records for that time frame of the area. One baptism of a daughter in 1846 Presbyterian record in Chatham...have you had better luck finding records? Holly My blog-http://raeburnfamily.blogspot.com/