Although I can’t enter every Carnival of Genealogy, the 72nd seemed rather special:
Mothers! Mother’s Day is right around the corner and this is the perfect time to honor your mother, grandmother, godmother, step mother, den mother, aunt, neighbor, or friend who happens to be a mother. If you’ve written about your own mother for the COG before, consider writing about another mom on your family tree. Let’s make all our moms famous!

My mother died far away at age 57. I was on a different continent at the time and my siblings had to take care of the arrangements. No-one who is over 50 thinks that 57 is “old.” No-one who is under 50 wants to think their mother will die some day. Such were the times and circumstances, I can only remember my overwhelming grief, anxiety and bewilderment pouring out uncontrollably in a washroom at Heathrow airport.

Sometimes I think the younger you are when you lose a parent, you are so stunned you have trouble later remembering the funeral and burial details. Sometimes I think hardly knew the whole person who was my mother. It takes maturity to recognize a mother as an individual, not “just” a mother who only exists in relationship to the me. Much of it I did in hindsight. We are all less than perfect individuals, even mothers and fathers.

Clare was an only child of Latvian descent. She was quite beautiful. Photographs do not capture the distinction of her eyes, one blue and one green. Her parents spoiled her, and also restricted her. She was bright in school—creativity was her forte, in writing and particularly in drawing. Playing the piano and riding horses were other passions. Her heart’s desire to attend art college in Boston or New York, where she had relatives, was strongly vetoed by her father.

So she earned a job as a local newspaper journalist in the 1930s, having to content herself with her language and grammar skills. Nevertheless, in a small town, Clare was relatively sophisticated. Her parents and relatives imbued a then-exotic European influence that suited her spirit.

Marriage and children somewhat stifled her creative side for a while, unless you count sewing and baking. But she found an outlet eventually in art courses and exhibitions. The hiring of maids (remember DPs? “displaced persons”) and kids off to private schools gave her the chance to step outside the motherhood role. As a widow, she re-focused her energy to steer the family business for a while.

Clare had sadness in her life too. Was she mis-matched in marriage? Did she ultimately feel unfulfilled? Did she inherit a genetic predisposition to addiction? She lost her first child. She suffered the poor choice of a second husband.

Mom never knew her children succeeded in their own ways; she never knew all her grandchildren and they didn’t know her. We all lost. I don't want to make her famous. I like to think of her best when she felt happy. 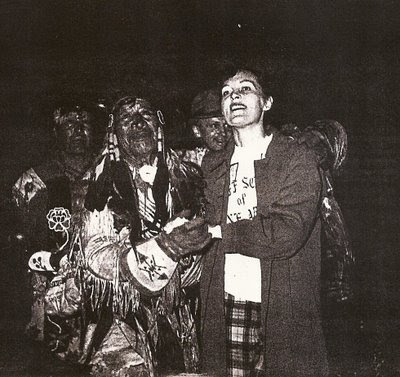 Brenda
Thanks for sharing your tribute to your mother.

It must have been very difficult for you to be far from home when your mother died.

Brenda, your Mom was truly a very beautiful woman. Now her grandchildren can know her through your eyes and words.