Notification of an award is a momentous occasion. Receiving a prestigious award may be a once in a lifetime happening.

The National Genealogical Society’s (NGS) 2008 Award for Excellence: Genealogical Methods and Sources was announced 15 May 2009: United Empire Loyalists: A Guide to Tracing Loyalist Ancestors in Upper Canada by yours truly:
“Presented to an individual or nonprofit organization for a specific, significant single contribution in the form of a book, an article, or a series of articles published during the past three years that discusses genealogical methods and sources and serves to foster scholarship and/or otherwise advances or promotes excellence in genealogy.” www.ngsgenealogy.org/cs/competitions 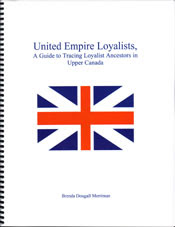 Reasonably stable recipients do not respond to the news with a) stunned silence, and b) unseemly babbling. Dignified recipients do not happy dance to the window and shout “YAAHOOOO!!” at bemused passersby heading to the Market around the corner. To be fair, all this was before enough caffeine had percolated into my central neurons. You have to understand part of the shock was not knowing my book had been entered in the competition! Sandra Roberts of Global Heritage Press, my publisher, was much more professional; she seemed certain no-one will call tomorrow to say it was a dreadful mistake.

So now I’m shamelessly blogging. The book took over five years to plan, write, research, assemble and endlessly re-write. Now it is deemed of some beneficial value by qualified genealogists. It was always intended as assistance for UEL descendants, based on my 30+ years of research encounters with their forebears in a sticky time period for sources and evidence. There have been so many misconceptions and misunderstandings about Loyalists among newcomers researching their ancestors and the public in general.

Would you believe, I have no Loyalist ancestors. More’s the pity. But I have a deep affinity for those whom I frequently meet in the zillions of documents I come across. Lifelong learning is a daily experience (aren’t we lucky?) and rarely stays static. That means if I were to put together such a book again, it might look quite different. I’ve already learned more. Then, the irresistible urge to re-write, re-write, re-write a manuscript, requires a firm voice to call “Enough!” (... enough for the moment, enough till the next time ...).

Regrettably I hadn’t planned to attend the NGS Conference in Raleigh, North Carolina, where the award was announced at the banquet. It’s a while since I attended an NGS banquet and I don’t know if award recipients are allowed a few Oscar moments to thank everyone they ever met, including the kiddies and pets, until they weep. If I had been there (in a designer gown chosen by my avatar) I could have expressed my gratitude again —

* to LAC archivist and guru Patricia Kennedy who took time from her pre-Confederation immersion to review sections and send me reams of stuff;
* to Fawne Stratford-Devai who laboured uncomplainingly at nights to format text and difficult illustrations;
* to Alison Hare whose skills and friendship I strained in several sections (but she still speaks to me);
* to all the other Loyalist genealogists who answered my questions;
* to the Roberts team at Global who allowed the whole thing to start on Global Gazette;
* lastly, in lieu of parents, children, and everyone I ever met, dare I thank my camel Abdul for his ever-solid support and promise of adventure.
Posted by BDM at 22:17

Congratulations Brenda on receiving this recognition for all your hard work.

Congratulations Brenda. It is indeed a very prestigious award and one for which you should be proud.

Congratulations! Well done. And well deserved. As someone with Loyalists and Patriots both, I'm grateful for your efforts. Thank you for a wonderfully helpful book, Brenda.

Wow! Congrats Brenda - you deserve the recognition for the great effort!

I was delighted to see that all your hard work over so many years has finally been recognized. Congratulation on a job well done and truly deserved. I only wish that I had your book when I was doing Loyalist research on the Simon Fraser family.

Congratulations on your most recent award for the
United Empire Loyalists: A Guide to Tracing Loyalist Ancestors in Upper Canada. I have always appreciated the work of Rick and Sandra Roberts in building Global Genealogy, but their efforts would not be as appreciated if it were not for the quality of the material they publish and promote. Your Award of Excellence recognizes both your research and dedication to the United Empire Loyalists as well as their ability to spot excellence as well. It has been said that for a Canadian to be recognized he/she needs to be recognized in another country first. This award from the NGS raises your status to a new level.

Your comment means a great deal to me, Fred, and the Roberts will appreciate it too. I thank my genea-blogger friends as well, for their encouraging words.

Congratulations Brenda! It's wonderful that your hard work is being honored by this award.

Brenda Baby! You are so worthy of the award. I'm am really beginning to think that maybe a week riding a camel might be good for something after all.
I am so proud to call you my friend!

I'm just back from several weeks in China so missed the announcement at the time.

A great honour for you and for Ontario genealogy generally.

I've finally had a chance to explore your blog for the 1st time since we "met" online, and I am very impressed, and honored that a researcher like you has found my own humble space of interest.

I fancy myself something of a creative writer, and poet, and beginning Genealogical Researcher (Yes, even after 20 years of off and on research, and a few successes, I still consider myself a newbie Genealogist in many ways.), and have dared to dream that my creative writing could be seen by a wider audience someday, but know the chances are slim.