A lovely cluster of old buildings called “Berkeley Castle” has been renovated at the foot of Berkeley Street between The Esplanade and Front Street. They date from the middlish-1800s, including what was once a knitting mill. The present site has a pleasant courtyard and a unique appeal for small business occupants. The current owners have acknowledged some of the history, e.g. “In 1842 the site of Berkeley Castle Yard was occupied by orchards and sat at the water's edge. A formal garden and fairground existed there as well. Joseph Small, who was once mayor of the town, owned the property and built a wharf at the foot of Berkeley street.”

But long before the mid-1800s, I want to go back to when the Town of York was conceived and born. I’m not a historian or an archaeologist, but I have a story.

In 1793 Governor Simcoe selected a new capital for Upper Canada at Toronto Harbour. A muddy little town called York would spring up forthwith. Mind you, parliament was not in session here until 1795. Many officials were reluctant to move from their comfort at Newark (Niagara-on-the-Lake). The parliament buildings, aka Government House, were not completely finished until 1798. Their predominant site was on the east side of Berkeley Street, south of Front (once called Palace) Street. In the 1790s, Berkeley Street was the eastern town boundary.

Meanwhile, a number of plans and surveys existed for the town which occasioned plenty of angst among would-be residents and officers of the Crown. The governor’s office and the land committee were swamped with petitions for building lots and larger estates. Everyone wanted a prime location. Building contractors, carpenters and masons were in great demand from day one. Some properties were being claimed, and structures were being built, before land titles could be confirmed.

My interest was in a man called George Porter who was among the earliest arrivals from Newark in the summer of 1793. He took full advantage of the new opportunities. In his various petitions, Porter described himself as a “former sergeant of militia” or a carpenter. He erected one of the very first houses in the town, a log house on Lot 1, First Block. The lot was between Front and King Streets, bounded on the east by Berkeley and the west by what became Ontario Street (each block had several lots, sometimes of varying sizes, with a front and a back on differing streets).(1) Lots on the First Block along Front Street did not appear to include water lots across the street. Porter also had other irons in the fire, having a grant of land on the Don River and applications for other properties in York and Newark. It’s known that he had a wife and family in York by 1797.(2)

Enter John Small (1746-1831), clerk of Simcoe’s executive council, coming to York to take up his duties—John Small of the infamous 1800 duel which resulted in the death of the attorney-general and overshadowed his entire career (see Dictionary of Canadian Biography). On his arrival, Small decided the perfect spot for his new home was on Lot 1, First Block. He would be mere moments away from his work at Government House. But George Porter had already claimed it. The two men resolved Porter’s prior claim with Small buying him out on 31 August 1795 for $50 and a promise of completing the shingling.(3) They probably knew each other from their neighbouring town lot claims in Newark. Small would live in the house while planning his grand estate, intending for Porter’s house to become his eventual stable.

A lot of things never went smoothly for Small, a bureaucrat whose “work was soon badly in arrears.”(4) It must have been doubly aggravating for him, as the governor’s clerk and a permanent resident, that ownership and title for Town of York land grants often bogged down over conflicting claims—whose name was properly entered for which property by which surveyor or government official. Some lots, like Porter’s, had been allocated by surveyor Alexander Aitken before Simcoe requested surveyor David Smith to make another plan.

By 1805 Small was still trying to establish title to his desirable property whereon he had “his Cellar dug and the Frame for his House brought there 70 by 26 feet and the greatest part of it put together.”(5) Small stated Simcoe himself had initiated the delay for fear Small’s grand house would detract from the parliament building view. Actually, a government reserve had been declared early, perhaps another example of shifting survey boundaries, which may or may not have affected Small’s location. Nevertheless, apparently he eventually clarified his title and built his home. 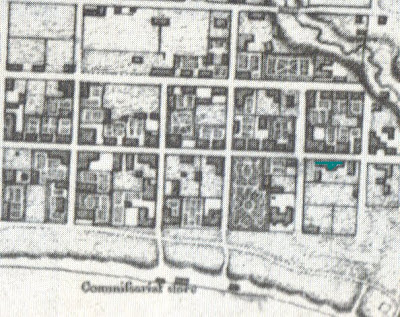 Town of York, November 1813, from "Sketch of the Ground in Advance and including York, Upper Canada," by George Williams, Library and Archives Canada; as seen in The Town of York, 1793-1815 by Edith Firth, opposite p. lxxxi.

With trepidations from an amateur, some discrepancies are noted regarding site locations and other matters, although John Small was not my target interest and each and every known map of old York has not been investigated. I invite comments on the discrepancies.

Small’s home can be seen marked in teal (where I think it is) on the 1813 map of York. The location agrees with both Scadding(6) and Robertson(7), writing later in the nineteenth century, who say Small’s house was on King Street, i.e. facing King rather than Front. That makes sense if he modified his plan so as not to “interfere” with the Government House view. And also probably because Porter’s more modest house occupied a different part of the lot. By now it seems Small had acquired more than one lot in the First Block. But where exactly was Small’s stable, once George Porter’s house? Enquiring descendants would like to know.

Porter’s house could be any of the other buildings shown on the block, but (discrepancy) Firth says the log house was located on the southwest corner of King and Ontario Streets, which would place it in the Second Block.(8) Scadding provides information about Small’s original home, referring to a plan of the grounds.(9) I wonder where that “plan” is now, and what was its date?! The house had a “central portion and two-gable wings somewhat after the fashion of many an old country manor house in England. ... It was one of the earliest domestic erections in York [c. 1794]. When reconstructed at a subsequent period, Mr. Charles Small preserved, in the enlarged and elevated building now known as Berkeley House, the shape and even a portion of the inner substance of the original structure.” Charles Coxwell Small was a son of John Small. Scadding was a bit premature on his completion date (discrepancy), since Small was still facing a partially constructed building in December 1805. 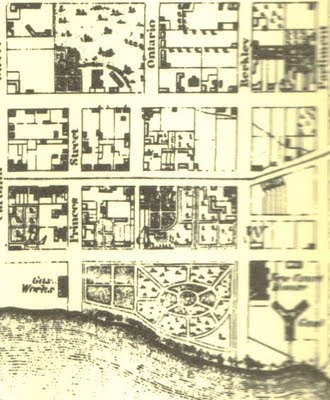 Part of fold-out (1842) map in frontispiece of Toronto of Old by Henry Scadding.

So what we see on the 1842 map is a different outline of Small’s house (another discrepancy?)—it now appears to be set back from King Street. We can see the extensive orchards on the south side of Front Street where “Berkeley Castle” now stands. By then the son Charles had effected his renovations and presumably had acquired the water lot south of Front. John Small had a son and a grandson named Joseph Small, neither of whom was a mayor of Toronto (discrepancy) according to a List of Mayors of Toronto but some descendants did become involved in public service and politics. Landfill at the shoreline began in the 1830s and we can see here how the esplanade was being shaped south of the orchard. On the east, the parliament buildings have disappeared, having been burnt down in 1813 during the American invasion. The Small home was demolished in 1925.

My friend George Porter remained in York for a few years, attempting like so many others to acquire additional land grants like his more influential contemporaries. George disappeared suddenly in 1799, leaving a small family in his wake. And leaving scads of questions about his widow’s life after 1799 until about 1823 and where his children were in the interim! Now that’s what I call a mystery.

N.B. See an update on Small and Porter

That sketch and map are so cool. The whole article was really interesting, I enjoyed reading it and getting all the new info.

I thoroughly enjoyed your story on the Berkeley Castle, I though I would give you a small update about the new community gallery which is just coming to life there as of January 2010

the Berkeley Castle Gallery is a community based group of artist, educators and community Cultural activist who have in collaboration with the build management open a ground floor street front space and will be developing programming and events celebrating and exploring the neighbourhood its history and the art being made in it. I have linked your posting into my facebook album of the opening night. I hope you approve of "sharing"

I've got some Porter genealogy information that might be of interest to you. These are from notes in the possession of my Great Aunt:

Thanks, James! A couple of John Davis Porter's descendants were in touch with me some time ago. John's parents provide me with plenty of mysteries to research and write about (... I'm not a descendant)! There's another post about George Porter on 15 April 2010.