Speaking of Quebec’s Land Register (in Frasers Part 8), I knew my John Fraser the farmer had been on the Rivière Rouge Road outside St. Andrews, Quebec (St-André Est) since 1806. It was not until the 1861 census that I could find the property defined as lots 21, 22, and 23. Obviously, John or his sons had acquired two adjacent lots in the intervening 55 years. 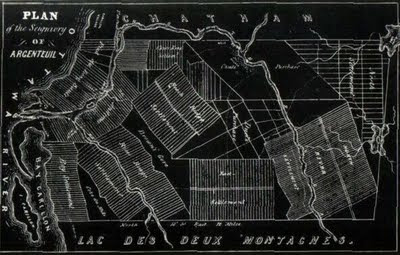 Map from Comte d'Argenteuil website.
With that information, my colleagues in Montreal were able to determine that the cadastral numbers were 592, 593, and 594 in St. Andrews cadastre, division (circonscription) of Argenteuil. The determination itself involved consulting a modern cadastral map to pinpoint and compare with the old property description. As Gary Schroder put it, “We only need one cadastral number to unlock the mysteries.” Although the 1901 and 1911 censuses provide space for a household’s cadastral lot number, the enumerator simply wrote Rivière Rouge for my Frasers. Sharon Callaghan found the necessary map and copied the Index des Immeubles for each lot. Then she chose a few promising-looking sample document numbers to pull.
Map provided by Sharon Callaghan and Gary Fraser from BAnQ, September 2009. Lot 594 is marked in colour.
Lot 594 was probably the original family land. Document no. 26647 was a declaration made by Angus Fraser, farmer in the parish of St. Andrews, on 22 November 1911. In essence, he said that the land was in the estate of his late parents: his father James Fraser died about 30 years ago, and his mother Anne McMartin, widow of James Fraser, died about 20 years ago, both intestate. Their only and lawful heirs in equal measure were Angus himself, Alexander Fraser, Annie Fraser, Catherine Fraser and Elisabeth Fraser. Alexander died intestate and unmarried about three years ago; thus his brother Angus and three sisters were his heirs. The declaration was written and sworn by notary Gaetan Valois and registered on 12 December 1911.

The next document of interest was registered on all three lots. No. 28757 was dated 23 November 1911 but not registered until 25 July 1914. Angus Fraser, Annie Fraser, Catharine Fraser and Elisabeth Fraser sold un droit de passage through their lands to the Canadian Northern Railway. The piece in question was a strip of land 100 feet wide, more or less following the River Rouge Road, for a price of $403.00 (piastres was the word used). This deed was drawn up by notary Joseph Evariste Valois of Lachute.

The last document I received was no. 38976 dated 9 November 1925, with the signature of notary Gaetan Valois of Lachute, registered 12 December 1925. Angus Fraser and Annie Fraser signed a deed of sale for all three pieces of land to Thomas A. MacAdam for a life annuity of $300.00 until both vendeurs are deceased. To show their right and title to the property, a number of declarations were included in the deed (each statement refers to a corresponding document number). The vendors were heirs-at-law of:
• their late parents, James Fraser and Annie McMartin, as per document no. 26647;
• their late uncle, Daniel Fraser, document no. 26648;
• their deceased brother Alexander Fraser, nos. 26647 and 26648;
• their deceased sister Catherine Mary Fraser, no. 38953;
• their deceased sister Elizabeth Jane Fraser, no. 38954;
• their late brother James Fraser Jr., no. 38950.

I expect the more recent documents would give a more exact date of death for some of them, but I do know that most are recorded in St. Andrews East Protestant Cemetery. One thing I find surprising is that all of these people died intestate! A note made later in the margin of the register book indicates that certificate no. 9115B was made 1 December 1939 to record the deaths of Angus and Miss Annie Fraser. The documents are register copies, of course; original papers were filed with the witnessing notaries.

The registry book in this case dates back only to the late 1800s, not far back enough to show any activity by my direct ancestors John the farmer or possibly his daughter Nancy. For that, seigniorial records for Argenteuil should be sought. Apparently they exist in the Montreal Branch of Bibliothèque et Archives nationales du Québec (BAnQ), but what kinds of documents they consist of, or what kinds of information they provide are unknowns. You can tell the end is not yet in sight.
Posted by BDM at 12:49