McFadyens Part 10: So Many Donalds

One conundrum after another. How many McFadyens does it take to change a light bulb? Only about six if they all have the same name and are in the same place at the same time!

A Donald McFadyen came from Scotland to Cape Breton and received some land in the rear of Gut of Canso from the government. In 1825, as a single man aged 28, he petitioned to relinquish the land to his brother and take up a lot “between the Great and Little Harbours at Malagawatch.”(1) The request was approved. By 1826 Donald held a warrant for two such-described lots on Lake Bras d’Or.(2) We have to remember that a Crown grant of land was more than a one-step process. Final title to the land, the grant itself, would not be given until some settlement conditions or other obligations had been satisfied. Before that, transfers sometimes took place between individuals that may not be recorded.

Two baptisms naming a father Donald McFadyen at “Merigowatch” appear in the Belfast, Prince Edward Island, Presbyterian register.(3) Son Lauchlin was born 5 June 1826 and daughter Catharine born 2 February 1828. The PEI clergyman visited Cape Breton once a year in the late 1820s until the area had its own incumbent in 1830 or shortly thereafter.

At the baptisms, the mother of the two children was recorded first as Mary McLean and next as Mary Calder. The anomaly was apparently caused by confusion with Lauchlin McFadyen’s wife Mary McLean, a couple who were also having children baptized.

We think this Donald died at Malagawatch on 10 June 1869 at the age of 77, registered by Alexander McFadyen.(4) Surviving Nova Scotia BMDs of the nineteenth century are scarce. It’s amazing to find one relevant to your research. We know this Donald had a son Alexander who stayed “at home.” Better (best!) yet, Donald’s parents were named as Lauchlin and Catharine. See the names of his first two children?

So far so good? The single man of 1825 could have married and had two children by 1828. Let’s be clear this is not *my* Donald McFadyen the soldier of River Denys who arrived at Cape Breton in 1828. But the same-name syndrome entails a necessary exercise of separating their identities. And keeping them separate. For the time being I won’t go into the agonies of untangling statistics for two Donalds on the 1838 and 1861 (there is no 1851) census for Nova Scotia which are heads of households only.

Enter Donald2 McFadyen, son of Donald the soldier, who was born in Coll, Scotland, ca. 1818.(5) His descendants—I am not one of them—say he moved to Malagawatch to take up a 188-acre lot. It’s pretty clear he thrived there, as a number of cousins independently confirm.

So why is Brenda still scratching her head? Indeed, the Crown land map shows a 188-acre grant with Donald McFadyen’s name, on the southeast side of Little Harbour, actually on what was/is called Militia Point.(6) We are fortunate to have the Crown land map. Unfortunately, it does not show the dates of a grant. It usually has references to a certificate number, or a book and page number. Years ago an on-site researcher at Nova Scotia Archives and Records Management (NSARM) was able to say the 188-acre parcel was granted in 1836.(7) 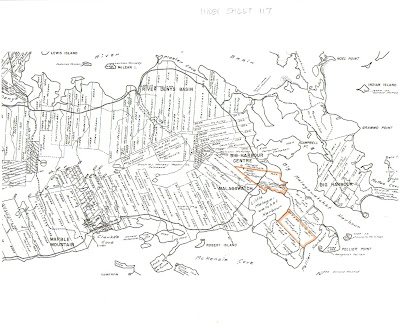 The Crown land map shows another grant of 165 acres at Malagawatch with frontage on both Big and Little Harbours in the name of Daniel McFadyen. The relevant certificate no. 9030 has not been located yet. The 165 acres was almost certainly made to the Donald McFadyen who petitioned in 1825 to have land at Malagawatch. The description for him “between the Great and Little Harbours of Malagawatch” [italics added] is specific. There are only two lots in the vicinity that match this description. The 188-acre lot faces Little Harbour but has no access to Big (Malagawatch) Harbour.

On the 1884 Church map of residents/occupants, both properties still have “D.” McFadyen on them.(8) The one between the harbours also has the addition of D. McFadyen Jr. on it. However, the early Donald did not have a son called either Daniel or Donald that we know of, whereas “our” Donald2 had two sons with those names. The 1865 Hutchinson Directory lists a Donald McFadyen, shoemaker, at Malagawatch. Hmmmmm. And I thought they were all farmers, according to census returns.

Which Donald received which grant when? Who was the Daniel of the 165 acres? Were Dan’l and Don’l confused in English from the verbal Gaelic sounds? Where exactly did each one live? Who was “D. Jr.” later on? Did Donald of 1825 and his immediate descendants move elsewhere after 1836? The Donald McFadyen on Cape Breton before 1828 could only be from a different family—different, but perhaps still related in some way.

Clearly, all the evidence is not in. Access to more land records might help resolve the conundrum. Once more to the Maritimes? Not only NSARM, but the county land registry office in Port Hood, is calling me. “We Rise Again.”

Ah yes the name Donald is very persistent--my father had it and so does my brother tho he goes by his middle name.

The pie-shaped lot is the one that my grandfather grew up on. I'm uncertain about whether the lot as it appears on the Church map remained intact or whether it was split at some point. In the 1940s/1950s my great-uncle John MacIntosh MacFadyen (1886-1980) and his cousin Kenneth Daniel MacFadyen (1885-1960) had neighbouring farms there. (Toshie's land was sold following my father's death. Kenny's land is still held in his family.)

Somehow I doubt that all these extra Donalds throw much light on the land grant problem.

(As to how many MacFadyens it takes to change a light bulb much depends on who has won the debate over whether it really needs to be changed.)

Thank you for the comment, Heather! (who knows whereof she speaks). It does help to know which piece of land your Donald2 was on and of course it stayed in the family. Maybe the "other" Donald (c1792-1869) sold one of his warrants to your Donald. We don't know where in Scotland this other Donald came from but I'm willing to bet it was Tiree or Coll. Fun, eh?

I'm going to leave a comment here too. Have you two seen the information on the Malagawatch MacFadyens in Charles Nutt's "Tthe History of Worcester"? I'm not sure whether it clarifies or confuses things.

An additional comment, Rita Farrell says that the parents of Heather's great grandfather were Donald and Barbara (MacKenzie) MacFadyen, but marriage records for their two children (Donald and Daniel) identify the mother as Sarah.

Another comment, the Donald MacFadyen who married Mary Calder was related to Alexander MacFadyen of Lexington according to MacDougall. (History of Inverness p. 177)

Alex is probably the brother who received the lot at the "rear of Gut of Canso" from Donald.

Thanks for posting, Cheryl. We have connected Donald (born c1792) of Militia Point to Roderick 'the tailor' (born c1807) because they both had parents Lachlan & Catherine on their death registrations. Roderick's death info was even more helpful in saying he was born in Coll & his mother was Catherine McKinnon or McKenzie (now can't find it on the NSARM site for the life of me! but the ref is 1877 Book 142 p. 44). And then we have the reference to Donald and Alexander being brothers. I have found a couple Lachlan & Catherine McKinnon in Coll OPR with a son Alexander 1795 and Roderick 1807 but their Donald was far too late, born c1814. Woe.

Yes, you kindly sent me scans from Nutt's book. I don't know where Farrell picked up on Barbara as wife of Donald2 because everything else I've seen points to her name as Sarah. I should send you a copy of my whole thing, but I'm still compiling (trying to) all the other McFadyens in Inverness County.

Anonymous said...
This comment has been removed by a blog administrator.
Wednesday, 04 November, 2009