Remember the Quebec Family History Society (QFHS) duo who wished to use my guinea pigs to familiarize themselves with Quebec land records? My previous posts about them are Frasers Part 8 and Frasers Part 9. Thanks to Gary and Sharon (again), their efforts have led to more information about the DOUGALL family’s early days in the St. Andrews area ... information I could not have picked up by any other means.

The family patriarch John Dougall was said to have arrived in Quebec in 1834 (family outline here). I knew his farm was at a place called Beech Ridge, and this map shows the proximity of the 90-acre property to St. Andrews. 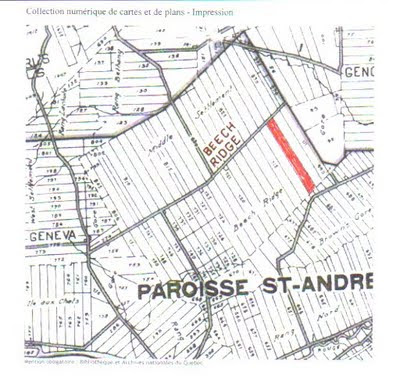 John Dougall’s name does not appear in the land records. Instead, his son George was the tenant of record in seigneurial books. In the 1842 census, John was in the Argenteuil seigniory and George was recorded nearby.(1) The first Dougall appearance in the seigniorial books was 11 November 1852 on what was then known as lot 20 south side Beech Ridge. But George Dougall of Montreal was paying the requisite rent from then until the last entry I see in 1873. His first payment was apparently to catch up with 1851 arrears as well as 1852. The annual payments began at about £1.7s. and increased only a fraction over the twenty years, although sometimes interest was added for late payments.

George was a tailor by trade who married Agnes Moffat in Montreal in 1842(2) and thereafter lived in the city. His father John was still located on the Beech Ridge property as a farmer in the 1861 census.(3) At that time John was at the advanced age of 78 and his household consisted only of his wife and a 28-year-old unmarried daughter who had become their caregiver. (Page by page searches of the 1851 census, and the Ancestry database, have not uncovered John.)

You can see the questions that arise. Why did son George assume the rent payments for the farm fifteen years before his father died? If John was still a farmer in 1861, who was working the land for him? He has no “ag labs” living with him. The absence of the agricultural schedule is a real loss.

There is a gap from George’s last entry in the seigneurial records (1873) until the first entry in the Index aux immeubles for the cadastral system (1884) when the property was now designated lot 713, Saint Andrews, Argenteuil District. That first entry was notarial instrument no. 9148 dated 18 December 1884, and the primary party was Robert McBride Dougall, a carpenter and joiner in Montreal. Who? I had to scramble into my totally messy old files. This was a son of George Dougall the tailor—I did have some bare information about this family.

That document occupied four full pages ... Robert “herein acting as well as for himself & in his own individual behalf, as being vested with the rights of his brother the late John Dougall, in the estate and succession of his deceased mother the late Agnes Moffat in her lifetime wife of George Dougall of Montreal tailor ...”. In short, the heirs of Agnes (Moffat) Dougall were selling their interest in the farm to their father George Dougall. At first it appeared that George Dougall Sr. had predeceased his wife Agnes Moffat but this was not the case. To make things a tad confusing, George Jr. had also married an Agnes, daughter of Robert Kirkby and Ann Harrison(4), and George Jr. had recently died. None of the dates of death are recorded.

Among the many genealogy nuggets to extract from the document were:
● Hugh Brodie was the acting notary;
● son John Dougall was deceased;
● sons James Joseph Dougall and Peter Dougall were living in Pembina Crossing, Mountain County, Manitoba;
● son George Dougall, organ trimmer, had died in Woodstock, Ontario, between the execution of his will 23 June 1881 and its probate on 19 January 1884, his sole legatee being his widow Agnes J. Kirkby of Woodstock;
● agent Sampson Paul Robins had power of attorney to act for the above three distant heirs;
● daughter Jane Dougall was the wife of Sampson Paul Robins;
● in addition to the farm at Beech Ridge, shares in the family residence in St. Antoine Ward, cadastral no. 816, were also included in the transaction;
● the sale price was $3,106.74.

George Dougall, Montreal tailor, then sold the farm the same day to John Francis Mitchell, farmer at Beech Ridge, document no. 9149, which added more nuggets:
● George first acquired the property by deed from Thomas Cochran on 19 March 1839;
● deed no. 1493 was registered in the County of Deux Montagnes registry office by notary M.G.T. Deluren [tight binding, difficult to read].

At last I have some documentation to show that the Dougalls were at Beech Ridge before the 1842 census. As yet I do not have the entire details of accessing and properly citing these land records. Gary and Sharon are pleased to add these resources to their own educational lectures and writing. Win-win.