Last September I talked about two old maps of Toronto. Some time later I just happened to be in the neighbourhood of The World’s Biggest Bookstore (that really is its name). If you can call a mile or two being in the neighbourhood. Odd, how the smell of books will lead to automatic detours *~*

A few hours of browsing, salivation, and sheer escapism are just what the doctor ordered. Did anyone ever leave a bookstore empty-handed? With mandatory canvas bag in hand, but never thinking to take a wheelie cart with me, I have to limit my selection each visit to save shoulder sprain (and a certain amount of budget anxiety).

I've recovered and picked myself up after a huge digression on the last post. 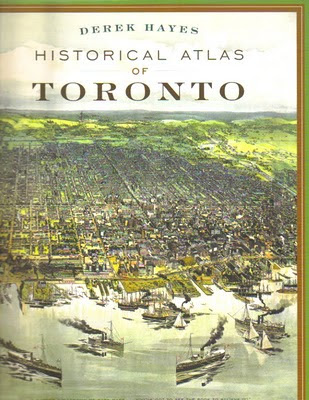 My latest treasure from a recent expedition. Derek Hayes is well-known for his marvellous atlases and map books, but this one was new to me. My city! Historical Atlas of Toronto won the Heritage Toronto Award of Excellence in October 2009. Published in hard cover in 2008, it also became available in 2009 in soft cover.

What delights therein, with such rare maps and accompanying commentary. Some publishing blurbs:

Lavishly illustrated with over three hundred maps, this new book charts the evolution of the city from its origins as a Native village to a French trading fort, to York, the capital of Upper Canada, and finally to Toronto, Canada's largest and most diverse city. Packed with archival photos and memorabilia to complement the maps.

* maps by early French traders and military surveyors, including examples from the War of 1812 and the American Civil War period of the 1860s,
* maps of the first surveys that influenced the urban growth of Toronto today,
* maps of railway lines, the Canadian National Exhibition and the fires that wiped out large swaths of the city,
* maps documenting the controversial development of the expressway network, from the 401 to the 407,
* maps showing the growth of suburbia, from postwar projects to recent subdivisions.

Each page is a revelation of new finds. I return to it again and again. How streets changed. How villages evolved, merged, disappeared. How businesses grew and moved. How the waterfront was reshaped. How services were structured.