Four major lists of Coll residents exist to inspire the thankless crazy-making task of trying to link generations. Three of them name only the adult male population, but even those slim pickings have value and will be blogged about later. Dear reader, your comments are invited. Dear relatives, a gold star for those who read to the end.

In one of those serendipitous turns of fate, we have a complete census of all Coll residents, recorded in the fall, and completed in December, of 1776. The list was barely mentioned in an earlier post. That year, a new assistant minister, Mr. Charles Stewart, arrived to serve the island. His immediate intention to assess the population resulted in what is known as the Catechist’s List whereby each household on every farm or toun was examined for their familiarity with the Presbyterian Catechism. The results were recorded in the kirk sessions book which had lain dormant since 1735.

Ages of the people were not given. But the first names of children under the age of seven were shown in a separate column because they were deemed too young to be tested on the articles of faith. Therefore it is possible to make some broad reconstitution of a family for that year. Most often, Mr. Stewart added a brief helpful word for “strays” to denote extended relationships or positions in a household: “his fr in Lw,” “his stepson,” “her mor,” “servant,” and so on. Married women were entered with their birth surnames, as per the Highland custom.

Leaping forward for one moment: My Donald McFadyen (born ca.1773 if his age on the ship's list is fairly accurate) had six known sons, among whose names will almost certainly be the forenames of his father and grandfather. I refer to him as Donald the soldier to distinguish him as an individual among other Donalds. The place names on Coll associated with my Donald, thanks to intermittent baptismal records, were Toraston and Cliad. In birth order his sons were, with baptismal or birth years in parentheses: Lachlan (1798), Angus (1801), Roderick (ca.1802), Hector (ca.1809), John (1816), Donald (ca.1818). The first Angus apparently died young and the name was again given to the last child in 1819.

If we accept as substantially valid the Highland naming custom whereby a couple named four of their children after their parents—and there is enough evidence the tradition played a large part in our relatively enclosed or isolated island community—then we have ancestral clues. Truth is, we have little else to work with in that era. The naming custom posits that the paternal grandfather’s name would be among the first two sons’ names, frequently the first.

Returning to the eighteenth century again, there were eighteen McPhaidens on Coll. One of those male names in 1776 would in all probability be Donald the soldier’s father. In 1776 our Donald was approximately three years old. McPhaiden candidates who had a young (under the age of seven) Donald among their children were Duncan at Grimsary, Lachlan at Arnapost, and a third un-named man whose widow was Mary at Totronald. Is it going to be an insurmountable hurdle to identify his parents?

With naming customs in mind, Duncan is not a forename used in Donald the soldier’s immediate descendants. And it was a name hardly to be ignored among descendants because of its early McFadyen origins on Coll. Unfortunately the widow’s deceased husband is a blank. Apparently he died prematurely, leaving three under-aged children. While these two candidates can’t be entirely eliminated, Lachlan McPhaiden of Arnapost may be the prime suspect as our Donald’s father. 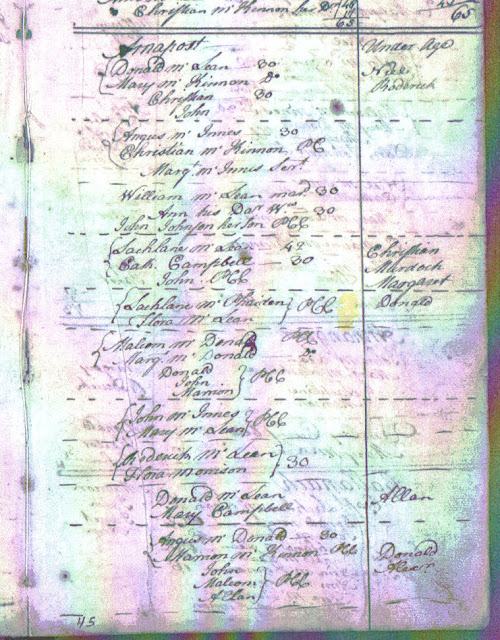 What to consider with the three candidates besides the father’s name? Farm locations on the island are one element. The dotted lines seem to delineate one household from the next. The numbers appearing after adult names refer to how many catechism questions they answered. Since Donald the soldier had only one known daughter, Ann, we don’t have as much conjectural room with girls’ names. The main age dividers for children are some help—how many appear, or do not appear, on either side of the age of seven. Here’s my thinking:
● If a couple only have young children, chances are good they are still reproducing.
● A household with four children under seven (there are many) could be configured with the oldest at a maximum of seven, while the youngest may be from newborn to about two years old. A rare household has five youngsters, which I believe accounts for twins, although there are no such notations.
● If a couple has only children seven and over, they may be in middle age, past their reproductive years, and the youngest child could be seven or any years older.
● If a married couple in a single household has no children, it’s likely they are elderly or newly married.
● If the couple has a mixture of children’s ages, more analysis is needed of the over/under numbers.

Marriage records for any couple alive on Coll in 1776 have not survived anywhere, that we know of. Initial reconstitution based on the list and the parish baptisms that follow—albeit the recordings are incomplete—looks like this:

Duncan McPhaiden and Catherine McDonald (Ardnish)
Mary, Marrion, and Donald were born before 1776. After 1776, born to this couple were John, baptized in 1784 at Ardnish, then a second John in 1786, then Cirsty in 1789 at Freslan. You can see a puzzling gap between the young Donald in 1776 and John in 1784, although who knows what potential absences might be somehow accounted for. Yes, they all have the same mother. Very few burials are recorded in Coll records. I’d say the names Donald and John were important in this family too, indicating close paternal or maternal ancestry.

Lachlan McPhaiden and Flora McLean (Arnapost)
Donald was the sole child of this household in 1776. He certainly appears to be the first born, so the couple were likely young. Our Donald the soldier named his first son Lachlan. Other children born later, all at Arnapost: Neil in 1777; Allan in 1782; Lachlan twice in 1784 and 1786; Mary in 1788; Marion in 1791; Kate in 1794. Mary, baptized in 1788, could be the purported sister of Donald the soldier, who married Lachlan Kennedy in 1819 and came to River Denys in Cape Breton.[1] Like our Donald, she had a son named Lachlan. The rest of the male naming pattern here, e.g. Neil and Allan, are not names appearing down to the grandchildren of our Donald.

Widow Mary McPhaiden (Totronald)
Mary had a son John over the age of seven and three children under: Ann, Donald, and Flora. I suggest approximate ages of John as eight, Ann six, Donald four, and Flora two. They are all familiar forenames in Donald the soldier’s family. Not knowing the deceased father’s name is a monumental disadvantage. One could speculate that the paternal McPhaiden grandfather was called Donald or John. Parish marriages have no record of a Mary McPhaiden of Totronald marrying again after 1776. There is no evidence of a birth/baptism in 1777, in case Mary was pregnant at the time of the list.


I raised the question whether McPhaiden was the married or birth surname of mother Mary, i.e., were her children actually McPhaidens? All married women on the list have birth surnames. If McPhaiden was not Mary’s married surname, then this family can be eliminated. Much of the evidence in the list regarding widows seems to support a married surname when young children are living in the home. However, the list is ambiguous: for example, widows Catherine McPhaiden at Uigg, Marrion McCasgie at Torraston, Marrion McLean at Bouste, have several children over the age of 7 with a different surname.

Eminent historian Dr. Margaret A. Mackay, Director of School of Scottish Studies Archives, University of Edinburgh, commented that it would likely reflect the habit of the list’s compiler, rather than any prescribed usage.[2] She added, “My gut feeling, if I can call it that, is that the surname used with “Widow” would be the married surname. In community usage (especially when populations were rising) I think it would become confusing to retain a woman's birth surname once she was widowed ...”.

The jury is still out regarding Donald the soldier's parents.

I've read to the end but I don't need the gold star.

I'd lean toward either the Lachlan/Flora pair or the widowed Mary but nary a bit of information to nudge either one into a backed-up-by-evidence column.

I like your deductive reasoning! I agree about the Scots family naming custom and notice it's often carried over Canada at least for the first generation- I'm sending you an email along those very lines!