It was a grey, rainy day when we found our way to Culloden Moor near Inverness. The site of the last battle fought on British soil has been preserved, not without difficulties over the years, by the National Trust of Scotland. Properties in private hands had to be acquired, a slow process. Many clan organizations and corporate donors have assisted financially for the Culloden Battlefield Memorial Project (we noted Garfield Weston among them). 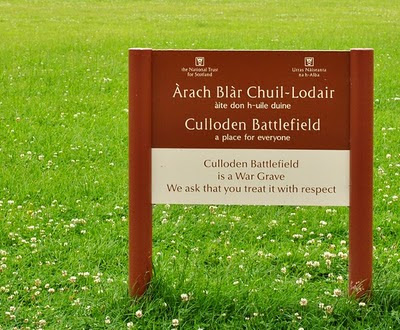 If you have the slightest Scottish blood, you’ve likely heard of Culloden: the defeat of Bonnie Prince Charlie; the slaughter of the Jacobite army; the subsequent savage attempt at genocide by Butcher Billy, the Duke of Cumberland; the final disintegration of the clan system. The date of 16 April 1746 lives long in memory wherever Highlanders dispersed. 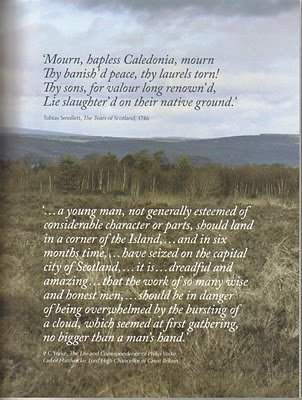 The Culloden Visitors’ Centre was recently rebuilt with a roomy café and large shop; recordings are available for walking the field itself and each monument thereon. A multi-media walk-through in the Centre details both the government and the Jacobite views of events leading to the climactic battle, very informative with contemporary citations. It’s good that we allowed plenty of time for lingering and absorbing. My disappointment was in the room that proposes to give you a sense of the battle, with sound and film on all four sides to capture the essence. Maybe it works for others, but it didn’t come close for me, because ...

My “personal” history of Culloden began many years ago with John Prebble’s iconic book Culloden. Then I learned about, and rented, the amazing BBC film Culloden (a website worth reading if you’re Scots or a film fan) by Peter Watkins, based on Prebble’s meticulous research. Made in 1964, Watkins’ then-innovative device was to follow the action as if a television crew were present at the scene more than 250 years ago. It was one of the first films to employ documentary style of a historical event, and to my mind still the most stunning ever (static image below from the website hardly begins to give the sense of the action). 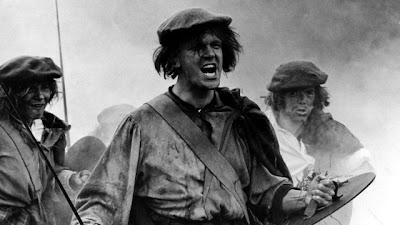 Nostalgia: In 1982 the Ontario Genealogical Society (OGS) held its Annual Seminar at the University of Guelph. 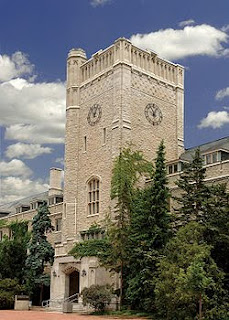 The theme was Scottish—what else? given the university’s renowned Scottish Studies program and its enviable McLaughlin Library collection, arguably the largest outside Scotland itself. Since OGS did not have a branch in Guelph at that time, three members agreed to run the event: Allan Hayne was the seminar chair, Harold Doan was the registrar, and yours truly was the program chair. My first thought was that we must have Donald Whyte. And so we did! It was perhaps his only invitation to Canada and he was as thrilled as we were. Happily for posterity, George Neville, then editor of OGS’ Families, colluded with Donald to publish his Canadian-visit diary in the same issue of Families with the seminar proceedings (Vol. 21, No. 4, 1982). Thus began Donald's fortuitous association with OGS.

At one point in the Saturday afternoon program, I arranged for the film Culloden to be shown. The impact the second time (for me) was as forceful and disturbing as the first. Near the end of the film and after the battle, as I recall, a woman called Agnes MacPhail was “interviewed.” Her traumatic shock was so real after what we’d seen, I was not the only one in tears (again). On leaving the theatre, Bruce MacPhail said to me in an emotional daze, “That was my ancestor!” The moment stays forever with me. Bruce had married a very attractive MacFadyen, a former neighbour of mine, which really has nothing to do with this story. Nor with my McFadyens as best we knew at the time. But you know I love to toss the name around.

Donald Whyte’s diary displays his low-key humour and his delight with his entire stay, recalling so many various OGS members of those days and the correspondents he could meet in person. May I add that the banquet entertainment, the MacCrimmon piper son of another esteemed neighbour, was well received (Donald: “If he had a fault, it was a certain lack of modesty, but he received a tremendous ovation.”) I only throw that in because the piper will come up in a future blog. Donald is missed by many friends and associates around the world.

Post-digression, the BOOKS in the Culloden Visitors' Centre shop!! More weight-breakers for airline luggage allowance! The National Library of Scotland shop and most bookshops couldn't hold a candle to this. Now, lovely stacks of them sit mourning for the spare time I promised them. There’s a Fraser in No Quarter Given✱ calling for my attention. A Gaelic primer and a Lowland Scots dictionary. Numerous Hebrides compilations. I need a Highland hermitage month. 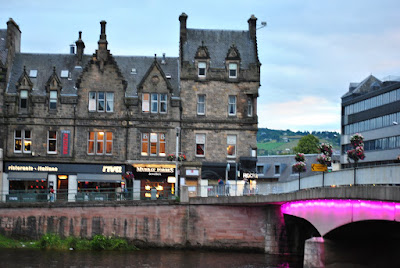 And of course I’ve neglected Inverness, the obvious place to stay for a visit to Culloden. Brief as it was. Family history and whisky-tasting were not our only pursuits. The search for live, hot, bagrock (pipe-rock?) music was not doing too well since live music is frequently not available until weekends and somehow we kept missing the boat, er, bagpipes. Then we met Bridge Street in Inverness and scored with The Gellions, “the oldest pub in the Highland Capital.” Grrreeee and glee! The whole street was alive with the music from the pub. Schiehallion, the band. I know it’s not to everyone’s taste, therefore I spare you a link you might automatically click on and have to watch a lot of beer-soaked Invernessians packed like sardines attempting cool dance moves ... “Schiehallion New Year 2010 (2)” on YouTube has the piper working hard, but falls short of a live experience on a more prosaic night. Better you should have a link to Red Hot Chilli Pipers (PIPERS not PEPPERS!). 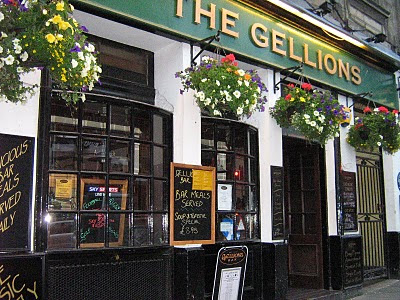 Three photographs by CDM and BDM July 2010; the University of Guelph photo is from somewhere on its website that hides from me now.

You probably remember that you showed the film Culloden at one of my birthday parties, in the dining room of the farmhouse. I think that must have traumatized some of my young friends, as it was quite (unexpectedly) violent. I should see if our local, amazing video store has it.

Traumatize the kids ... one way to keep 'em in line. LOL
Try your public library for the film.