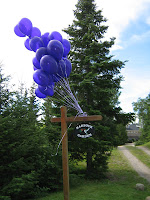 For the sake of brief entries, I am not footnoting (most of) the facts in this ongoing memorial. Sources have been noted either in other blog posts or in my family history books.

6 June 1916 On this day in Belgium, William Lauchlin McFadyen “died in War, unknown cause.” Born in 1891, he was my Dad's uncle but with four years' age difference they were more like brothers. Willie joined the 1st Canadian Mounted Rifles (Saskatchewan Regiment) as a private in September 1915 and was in the deadly German bombing and overwhelming assault east of Ypres on 2 June 1916. Military historian Granatstein says “Nine-tenths of the Canadian forward reconnaissance battalion became casualties during the bombardment.”*[emphasis added] Willie is buried in the Commonwealth War Graves Commission's Bedford House Cemetery at Ieper (Ypres), Belgium. On the family stone in Sunnyside Cemetery, Manitoba, is written for him: “I go to prepare a place for you.”
* Jack Granatstein, Hell's Corner: An Illustrated History of Canada's Great War, 1914-1918 (Toronto: Douglas & McIntyre, 2004), 81.

13 June 1914 Peter Dougall died at 234 River Avenue, Winnipeg, Manitoba, a few months shy of his 90th birthday. He'd had a long and fulfilling life between his birthplace just west of Edinburgh, Scotland, and his final days in the city where some of his nine children settled. A devoted Presbyterian, he spent “many years of faithful service” in his long-time Renfrew, Ontario congregation. In his will he said, “I recommend that my family shall live harmoniously and good and useful lives and assist one another if needs be.” Peter's wife of more than 60 years, Catherine Fraser, survived him by only six months. Peter was my paternal great-grandfather.
Posted by BDM at 10:41