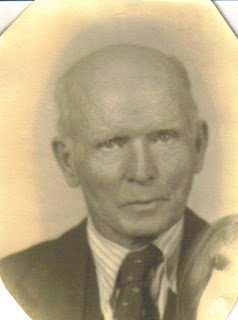 For the sake of brief entries, I am not footnoting the facts in
this ongoing memorial. Sources have been noted either in other blog posts or in my family history books.

4 May 1934 William Charles Dougall died in Vancouver at the home of his daughter Mabel (Dougall) Jaeger. Will apparently trained in his father's blacksmithing trade which later became a carriage-building business in Renfrew, Ontario. He followed his older brother John Fraser west to Winnipeg where they established their own carriage making business; perhaps brother Thomas was also initially involved. It is said the tragic death of his brother John Fraser in 1916, and business irregularities, affected him deeply for the rest of his life. He may have been prone to depression from then on. One of Will’s hobbies was making rustic furniture. He and his wife Jessie Isabella (Belle) McFadyen moved to the west coast in 1920. After Belle died in 1927, Will lived on a small farm in Whonnock, British Columbia. He is buried in Ocean View Burial Park, Burnaby, BC. Will was the grandfather I never knew.

13 May 1810 John Dougall (“Dougald”) of West Calder, Edinburghshire (later Midlothian), Scotland, son of Thomas Dougall and Marion Pollons, married Marion Hastie of Whitburn, Linlithgowshire (later West Lothian), daughter of John Hastie and Margaret Brown, at Whitburn parish. There is an apocryphal family story that Marion, daughter of a landed tenant, was engaged to be married to a young man of suitable means. The man broke the engagement to marry someone else and Marion rebounded to marry John Dougall, “a humble but god-fearing” man. We often hear variations of stories like this, where one party married (or eloped) beneath their class. After their oldest son Thomas sent encouraging words of life in Canada, and their second son John died of injuries from a horse, the couple emigrated to Quebec. They were my great-great-grandparents (photograph at this blog post).

16 May 1869 Margery (McIntyre) Fraser died on this date at St. Andrews East, Quebec (aka St-André Est). Her death is recorded in St. Andrews Presbyterian church register, although no marker exists in the cemetery (nor for her husband John Fraser). I have not been able to determine her whereabouts in the 1861 Canadian census. I know she was born in Scotland ca.1786, but her family and origins are still a mystery. A working hypothesis is that she came to Canada with a married, older sister, Catherine (McIntyre) Cameron. Margery was my great-great-great-grandmother.
Posted by BDM at 10:46