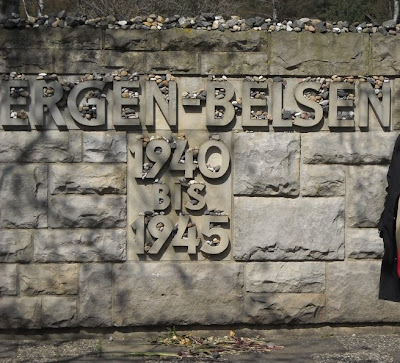 Visiting a Holocaust memorial site is a painful experience.

It's very quiet, few people are observable as we walk the 50 hectares. None of us feels like speaking much. We read information on the stark obelisks placed on the now-grassy fields and woods where thousands of humans once suffered indescribably. A few foundations of the wretched camp huts still remain. 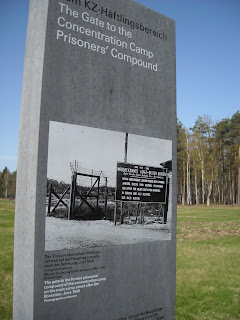 Bergen-Belsen was first a Wehrmacht-run POW camp for Russian soldiers; 20,000 of them are buried in an adjacent cemetery. Only later in 1943 was it turned into a concentration camp by the SS. Both German administrations treated the inmates criminally. The bare obelisks and flat concrete markers, at specific sites, reveal the hair-raising story of overcrowding and malicious neglect through lack of adequate shelter, food, water, and sanitation. At least 52,000 men, women, and children died, Jews being the vast majority. Thousands more died after liberation, weakened from starvation and disease. Mass graves are everywhere: 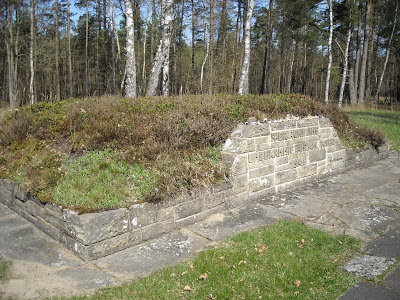 Along the entrance way, sound recordings and interviews with survivors can be heard. I did not go to view the photographs and historical footage. Many years ago I had seen film made by the camp liberators. Once is enough to never, ever forget. The arriving British and Canadians were stunned by the walking skeletons and heaps of unburied corpses. The crematorium had broken down in the last days. 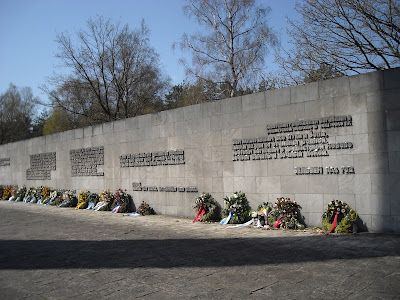 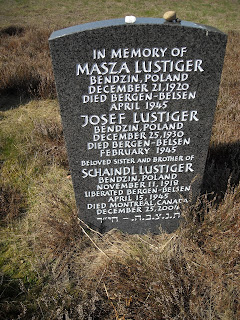 Many nationalities are represented on the main memorial wall: French, Belgian, Dutch, Russians, Hungarians, Italians, Poles, and so on. The French dedication to their nationals says they "committed no crime other than love for France and not complying with the invaders' ideas." An individual stone can be seen here and there to memorialize a lone person.

The small Jewish cemetery has stone markers for some who died here, erected by family survivors or their descendants. The brief commemorations are poignantly touching and sad. They include Anne Frank and her sister Margot.

But to my horror, the first stone I saw was defaced. The Hebrew inscription can be seen at the edge of the gouges. 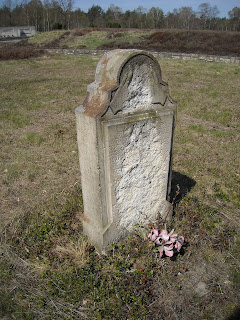