Before we hit the highway from Riga to Limbaži—armed with maps, ancestor charts, old photographs, and our Latvian survival dictionary—we had no idea if any Jurikas descendants still lived in the area. In fact, we didn’t know if we could locate the erstwhile farmhouse or identify it from a 75-year-old photo. Or if it indeed still existed. 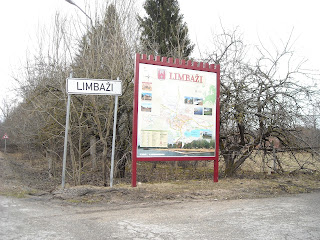 Jürri (Juris) Jurikas moved his family to Krūmiņi farm on the Lāde estate near Limbaži about 1857. We presume this was to assist his sister Kadri whose recently deceased husband, Pēteris Lipsbergs/Lisbergs, had had the farm management right. So brother Jürri soon assumed that role. Later, mild land reform in the 1870s forced the landowners to allow peasants to buy a small portion of their estates. At that time Jürri's son Jahnis (Janis) Jurikas acquired the deed to Krumiņi, a property of slightly more than 27 acres. Old maps indicate the farm was about five kilometres south of the town of Limbaži. 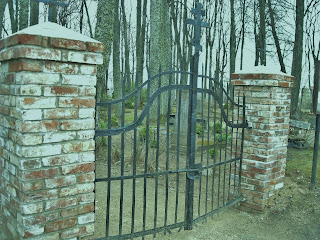 Exploring the town was its own interesting experi-ence, but we had more on our agenda. We headed for the small Orthodox cemetery. Thanks to some expert assistance ahead of time, I knew approximately where to look for my Jurikas family. It was a national clean up day across the country and a few people were moving about here and there in the cemetery; we had seen numbers of them picking up trash from highway ditches (maybe that’s why the town was so deserted-looking!). They were sprucing up plantings on individual gravesites.

Quite apart from an annual clean up day, cemetery care in Latvia is largely a family responsibility. In rural areas especially, care extends from preparing the body of the deceased to digging the grave. Ancestors are honoured with plants and flowers (artificial flowers are disdained), evergreen boughs protecting them in winter. Families regularly come to visit, bringing their children to help. Small tools, decorative items, watering cans, and containers were evident in every cemetery we saw. Sometimes a small seat or bench has been installed for comfort.

Two figures were already standing in the right general direction. Over there I’m sure; I lead the troops. Beyond the excitement of finding the burials, a strange frisson of expectation was forming in me. We gaze mutely at the four neatly aligned graves, dominated by the cross inscribed with the name of Jahnis Jurikas. The two strangers were also gazing mutely at the same graves. My frisson erupted with clarity and I addressed the older man, “Are you Jurikas?!” He answered hesitantly, “ ... Krastiņš.”

“You are my cousin!” I burst, commenc-ing to babble until his blank face stopped me. There we were: standoff. No English on one side and no Latvian on the other. What to do but pull out the family chart and with my assistant handling the dictionary department, show him that his mother and my mother were first cousins. He showed me his mother’s grave in a different section. His son was with him. They understood we were from Canada and mentioned a cousin who went to Edmonton. But the strangeness persisted — no smiles, no shared excitement, no animation. As we fiddled with cameras and before we could ask a million more questions, the two left. Went away across the field. Perhaps he was more stunned than I was. My cousin Janis Krastiņš.

The oldest Jurikas burial plot has markers only for Jahnis and his wife Katrina Tukkums. I can but speculate on the additional two graves, for example, the deaths of his parents are not accounted for yet. One looks like it could be a child.

Jahnis and Katrina’s children all died elsewhere except their son Janis whose daughter Tekla married Imants Krastiņš, and thus that family carried on with the Krūmiņi farm. This group is buried separately. Many of the Tukkums family rest here as well; they lived on a neighbouring estate.

Onward we went, lamenting the unasked questions, to search for the farm. The unpaved roads were liberally pot-holed and muddy from rain that morning, giving our driver serious reservations about a potential wild goose chase. However, having memorized the 1937 photo and on the alert for a certain road junction, we navigated the few miles. Slowly.
And voilà. Not so difficult after all.Especially with the Krastiņš name right there on the mailbox. Paldeis (thank you)! You can see the house has changed a good deal. Here we met another teenage son of my new cousin, who was almost as shy as his father. His uncle lives here; Janis and sons live in Limbaži.

Maybe they were concerned that we were there to try to reclaim the family farm (as some Baltic descendants do)? Genealogical pursuits must seem completely alien to them, since they know exactly where everyone is.

Agreed .. that living people with deep roots in the "old country" and a certain comfort zone possibly find our interest and questions somewhat intrusive. I believe there is also some unspoken resentment .. a very subjective statement on my part .. that those who left should have come back at the first opportunity. I'd prefer to think one of these, or a combination, plus the language problem were our barriers plus some shyness at the surprise. Re "reclamation," I don't know how common it is for expatriate descendants to seek family property, I only know it's a lengthy, costly process and involves giving up your current citizenship. In our particular case at hand, the family should have complete reassurance that the farm passed from father Jahnis to son Janis and then to daughter Tekla and husband (in the absence of Janis' only son Juritis (George) who settled in Edmonton and stayed there.