To the enlightened, cemeteries are heritage parks. Quiet places of beauty, a solitary enjoyment, or even a picnic en famille. We in North America have begun to appreciate their significance, the need for maintenance, and the uncovering of small, forgotten ones. Walking tours of older cemeteries are introducing the general public to historical treasures. Genealogists and family historians have an abiding interest, it goes without saying, in transcribing memorials. But time and weather (sometimes theft!) wreak havoc on granite, marble, and other materials. And so groups of disparate people, not necessarily genealogy-oriented, have been formed for physical preservation efforts. This post is solely to herald their efforts and not the associated projects dealing with advocacy and legalities.

One related project that impresses me is a venture that could be a community model. The CK Cemeteries Preservation Project is an independent project that grew from concern over conditions in Chatham (Ontario) cemeteries, a concern echoed everywhere in this province. Cemetery owners, often municipal entities, can only allot so much time and funds (not enough, heritage-minded folk would agree) for maintenance.
The CKC group not only unearths dozens of sunken or buried grave markers, they are repairing vandalized stones, photographing their work, and learning history at the same time. A ground penetrating radar machine assists with locating fallen, covered stones. Armed with their “little shovels,” a great deal of back-breaking work is involved, digging and lifting, to re-position fallen or broken stones. One stone and monument at a time. With a great deal of respect for the interred and the families they represent. The volunteers find quiet satisfaction in the learning process, both physical and historical.

Owner of the Chatham-Kent Cemeteries website and also one of the first original volunteers, John Skakel notes the difference between the terms preservation and restoration, concluding firmly, " ... we truly are doing work that brings the grounds as a whole closer to what they looked like originally and not just the stones." Since their program has been carefully refined over a long period, he adds they are more than willing to share advice when contacted. The Chatham-Kent Council has recognized their quietly heroic work. Occasional donations assist with necessary materials and tools. 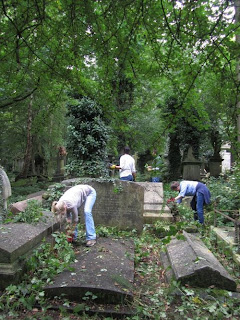 Similar undertakings happen in many corners of the world, some obscure and some well-known. Friends of Highgate Cemetery Trust in London, UK, is a charity that rescued from neglect and vandalism one of those iconic places where famous figures are memorialized. Well-organized volunteers give training on different facets of maintenance; working parties extend to landscape cleanup and gardening.


Then there are unsung loners. One man in the Ottawa Valley on his own tackled a small burial ground all but obliterated by thick overgrowth, poison ivy, and trees with stubborn roots; biting insects are another obstacle. It only takes a generation or two of family leaving the area for a cemetery plot or small burial ground to succumb to nature. He didn't stop at the restoration; he researched the deceased to bring their lives to light. There are more of these stories of search and rescue than you might think; one can find unexpected examples, probably not far from your own home.

Here, from South Carolina, is but one of a multitude of sources that feature workshops on doing it right. How about that lengthy list of items required for an inclusive understanding?! It's also necessary to know the laws on several levels that can affect proposed projects. Some groups focus on particular perspectives, such as The Association for GravestoneStudies that concentrates on historical artistry and symbology.

These small armies represent people from every walk of life who band together in hard work and frequent bonhomie. Seems like unconditional love to me. I salute volunteers everywhere who serve their communities and, in so doing, benefit family historians.

I really appreciated this entry Brenda. The CK cemetery preservers are doing an excellent job. Love all you blog entries, but this one hit close to home - literally.