Perhaps I've done my publisher a disservice. Perhaps myself too. There was some nice hype lately about one of my books and it's only occurring to Brenda now that maybe she should say a few words on the eponymous blog.

This year is the 30th anniversary and fifth edition of Genealogy in Ontario: Searching the Records, first published in 1984.

Actually, I did say a few words in the May issue of the Ontario Genealogical Society's (OGS) quarterly Families. Answered some questions. And the editor queried some of my colleagues who said nice things about me. So why would I blather more about it here? Well, because my family and friends do not see Families and possibly someone who would benefit from the book is lurking out there. After you write a book, the general idea is to sell books.

I've likely said this somewhere before on my blog, but writing the book was originally a trade-off with OGS for cravenly backing out of a loosely-defined project for which I wasn't well-equipped. On the other hand, I could see a gap in OGS publications that needed filling. The title was chosen in an ephemeral haze thinking that others might follow, such as Genealogy in Ontario: Major Resource Centres, and/or Genealogy in Ontario: Research Methodology. Bet even my genealogy friends didn't know that.

"GIO" sold its first printing rather quickly; I'm not sure if it was one or two thousand copies. and I wonder if anyone has a handle on ultimate sales figures. I lost track after 5,000 and that was about twenty years ago. In Canadian terms, not a sorry number. However, I've had to disabuse a few friends that non-fiction books of an instructional nature do not generate millions in advances and royalties. Expansion in the next editions made it grow, but later editions required fewer textual changes, becoming more a matter of updates. For that I am most grateful to the OGS members who assisted. I was, you see, busy trying to earn my rent with client research. With more books in my head. 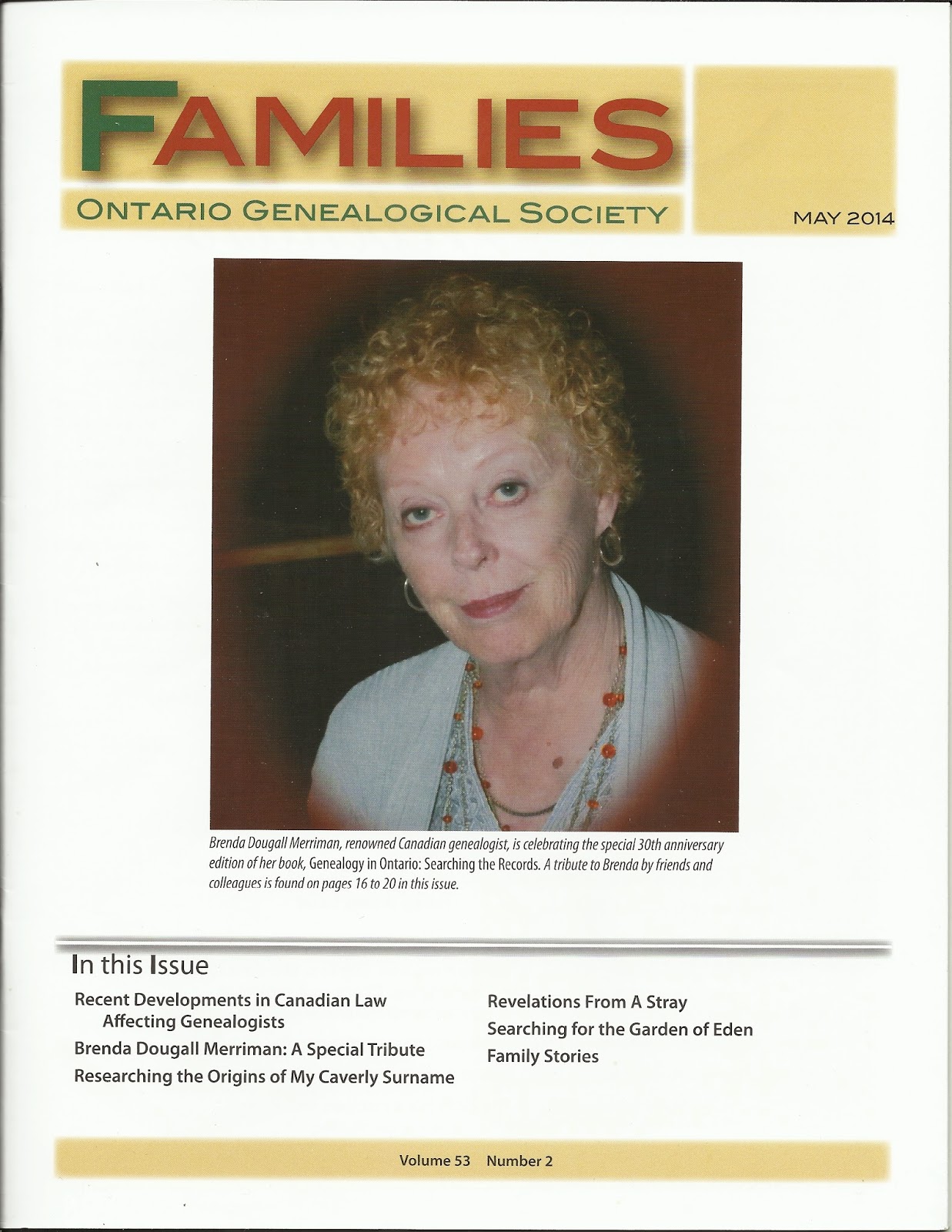 Something was missing in the Families tributes. In hindsight, maybe I didn't answer unformed questions. Maybe I can do it here. I missed the voices of some long-term friends in the genealogical community. The ones in OGS who first made a neophyte feel welcome; all those who willingly, cheerfully supported me in OGS and FGS and APG; and the ones the ones in BCG who mentored (and still nourish) me. Many are gone now, but my gratitude abides. They still sustain me, all.

Over the passage of time the greatest rewards have been the friendships. We talk to our dead people. We carry so much information to share, yet never stop learning. Are there more books in my head? Possibly.

Congratulations on 30 years with GIO, Brenda! I bought the 4th edition (2008) a couple of years ago, which is when I learned on p. 57 that handwritten original indexes to BMD records existed. I made use of this detail when I went to research at the Archives of Ontario for the first time this May. Although I didn't find the records I so ardently wished to locate, I at least got to see these originals and now feel I've done a more thorough research because of them. Many thanks for a great Ontario book!

Thanks, Yvonne. Great to hear from you! It's truly good to hear when GIO has been of some help.