This blog post began in anticipation of Canada's National Aboriginal Day, before the Truth and Reconciliation Report was made public on 2 June 2015. I ruminate as a student of the American Revolution and as a retired professional genealogist, long recognizing the contribution of indigenous allies to "our" eighteenth century cause, their modern struggles for identity, and moreover, their original presence everywhere in "our" land. Consider this post as random, naive pondering on our prejudices.

Where did we go off the rails since Champlain's day? That still-enigmatic man, regarded as a father of our country, is described as culturally and religiously tolerant in an age not known for tolerance in his Europe.[1] From colonial recognition of aboriginal rights in 1763, much seems downhill from there.

What would Champlain think of the imposition of the 1857 Gradual Civilization Act? And the consolidation in the 1876 Indian Act of previous measures that ultimately meant a choice between two loaded sets of "rights"?[2]

The Act deals with such things as the legal definition of who may claim Indian status in Canada, the rights and duties which accompany that status, the structure of Canada’s reserve system and the nature of Aboriginal self-government.[3]


Our historically devolving and increasingly paternal attitudes toward aboriginal peoples profoundly affected their living standards. Of course there are many other factors that led to the sad situation today, not only on numerous native reservations but among "enfranchised" people. Treaty rights and political scenarios have yet to be resolved; I decline to discuss them, being unqualified to do so. And yet, a few historical nuggets make me wonder how and where we went wrong.

If we go back to the founding of Upper Canada, the Simcoes received many kindnesses from the local Indians ‒ as they had much earlier been mis-named (but the generic name stuck). With due respect for the unintended irony in her quote:

Mrs. Simcoe was impressed with the tall muscular men of the Mohawk tribe. She related in her diary, "Jacob, the Mohawk, was there. He danced Scottish Reels with more ease and grace than any person I ever saw, and had the air of a prince ... I never saw so handsome a figure."[4]


And Indians were described:

One contemporary writer said they were truthful and never forgot a kindness. There were no words of blasphemy in their language. They had a great affection for their children and respect for the aged. Indians seldom quarrelled with whites unless insulted by them but were very quarrelsome among themselves. ... It is interesting to note that in 1810 a great number of these Christianized Indians did not use intoxicants at all whereas practically all whites drank to some extent.[5]

A conditional creeps in: One notices the phrase Christianized Indians. Shades of oppression to come. We should remember that many of the "all whites" drank to an exceeding extent if we read contemporary accounts. When did public perception begin changing? Derogatory accounts soon began, with little or no thought amongst the invasive newcomers of the radical disruption they caused and the corruption they spread. 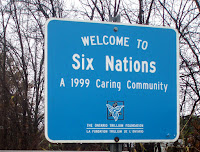 A century later, a privately condescending splitting of hairs ― referring to the Six Nations that provided so much support to the British during the Revolution. A member of the newly formed United Empire Loyalist Association of Canada wrote, when voting franchise was a hot issue:

These Indians by their loyalty, by their intelligence, are on an entirely different plane from some of our other tribal Indians, and it seems to me that Canada would make no mistake in granting them the franchise (but not to the other Indians) merely as an encouragement to the other Indians to rise to the high plane that they have arisen.[6]


Ah. Differentiating "Loyalist Indians" as superior to other tribes ... is it human nature to make such distinctions at a time when assimilation and status were the overpowering government words?

From the late nineteenth century, laws and legal classifications in Canada were developed to prohibit the sale of liquor to "known drunkards" and Indians. "Known drunkards" could comprise any member of the human race but that phrase sank under the radar as the strictures quickly became colloquially called the Indian List. It reinforced the notion that aboriginals were racially incapable of handling alcohol.[7] It resulted in prototypical native classification and identification, effectively contributing to their social marginalization. "Carding" is not a recent concept.

Most of us didn't get their nomenclature right. Especially we did not understand their world view and inherent wisdom. From the beginning, what promises were made or expectations met? Removal has been a dominant historical theme.

Nothing about today's revelations is simple. Cultures that almost disappeared are slowly reviving. Will general public perception change? Our ancestors all but removed aboriginal self-determination and freedom. How soon can we make it right?