The thing about the cemeteries I saw: individual grave markers are rare except in modern times. "Modern times" seems to mean post-Second World War, from what I could gather. Descendants living in the same region care for the graves. They know who is buried there. It's not like they are in a foreign place seeking elusive family history.

Because of that, a cemetery in Latvia is not necessarily a good source for finding or verifying older generations. The earliest man of a certain surname in that graveyard might have a marker, or perhaps simply the family name itself is commemorated. 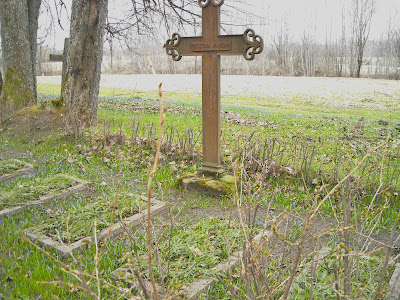 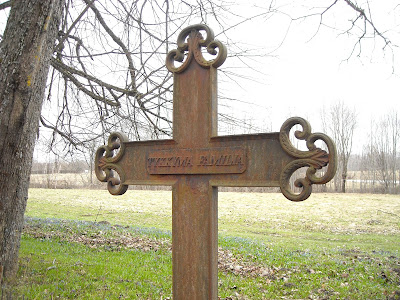 Example: the family of my great-grandmother Katrina Tukkums: TYKKYMA FAMILIA. At least seven graves are visible in this family plot. No specific bits of information. I know from her 1868 marriage record that her father was Feodor and they farmed on the Roperbecki estate, Umurga parish. I know from her grandson that she died 24 December 1938. Her parents likely lie here, silent. 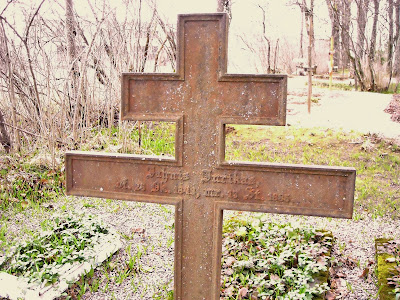 But Katrina would have been buried with her husband Janis Jurikas. It is the parish registers we depend on for vital information. There ‒ as with the occasional grave marker ‒ a strange language, confusing declensions in personal nouns, and often German or Russian script, make it a slow process.

Epitaphs for the deceased have become more common. One: "Memories of you will blossom like white apple trees." Another: "All my ties are broken, so dear to my heart." My cousins tell me that choosing an epitaph can lead to vigorous family discussion! As in many countries, Latvian communities set aside an annual Sunday to honour the dead. It's a summer ritual for extended family to gather at the cemetery, clean the area and tend the plantings, tell stories, and socialize with their grave-site/grave-side neighbours.

We are still trying to decipher this one, archaic Latvian, and German script. My great-great-grandfather Ans Freibergs (ca.1810- October 1891) ... and numerous descendants surrounding him.

So many photographs to fit into the family history update! But who's complaining. 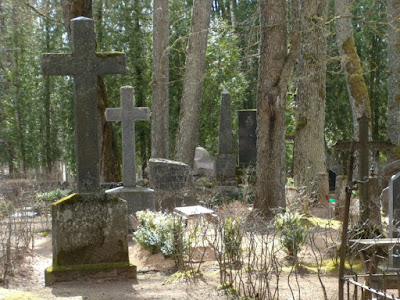