"Done What She Could"

My first reaction many years ago was that this was a rather demeaning epitaph, a subtle expression of reproach at not having done quite enough. Was my imagination working overtime, projecting a lack of familial warmth onto her, my great-grandmother? Or do the words indicate a fulfilment of her character? ... a life that met demands and challenges to the best of her ability? With resigned or cheerful acceptance if not creating extraordinary notice?

Did Isabella choose those words to commemorate her life? Or were they chosen by someone else to sum up a long life? 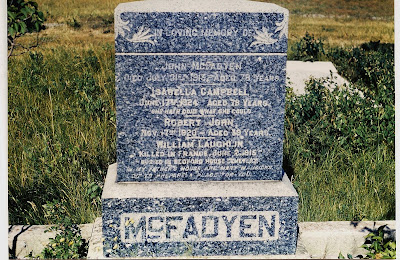 Isabella is buried with her husband, John McFadyen, in Sunnyside (Moosenose) Cemetery, in Springfield, Manitoba. Since she outlived her husband by nine years, someone else had the words engraved on the family tombstone, perhaps actually chose them. At the time of her death, neither she nor her remaining children lived in Manitoba.

Knowing this family slightly ― through reminiscences of a few grandchildren who visited ― it behoved me to revisit the New Testament. The McFadyens were strong Presbyterians of Free Church persuasion. I don't know how strict their observance of Sabbath activities was, what with farm work being necessary every day of the week, but every Sunday the family gathered at the dining room table to have Bible readings. No-one was excused. 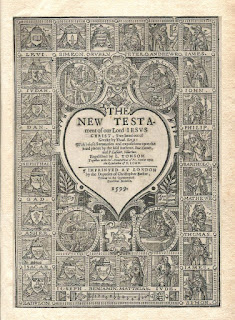 She hath wrought a good work on me. ...
She hath done what she could; she is come aforehand to anoint my body to the burying.


On the day when the Last Supper would occur, a wealthy woman approached Jesus and anointed him with the full measure of her very precious spikenard oil. The onlookers were saying what a waste; if she had sold it instead, it would have provided for many poor people that Jesus cared about. But Jesus rebuked them; she simply brought what she had at hand and honoured him with all of it. Most of all, her anointing unknowingly served a higher purpose: traditional preparation for his impending death and burial.


The thing about Bella, as she was known, was the raising of ten children when I expect she also did everything daily required of a farmer's wife. Not unusual for her time and place. She lived through the deaths of two sons and one daughter, the latter whom had Down Syndrome. When her children scattered and the family farms were sold, she stayed with her youngest daughter Barbara in Vancouver where she died. By and large, an "ordinary" life.

No doubt Barbara consulted her sisters for an appropriate epitaph (not everyone on the family stone has one). How would I interpret that for Isabella? Perhaps she clearly gave all she had to each mundane task. Perhaps she consistently "made do" in any situation with modest means. Perhaps her children felt she was a model of hard work and Christian teaching. I will never know for certain, but re-thinking an epitaph can be a lesson.

Maybe she chose that because the passage was an encouragement to her when she felt overwhelmed with the demands of her "ordinary" life.

What a potent reminder to read between the lines when we are trying to get a sense of just who these ancestors really were!

I like your take on that, Jacqi - something most of us can relate to. Thanks for taking the time to comment.