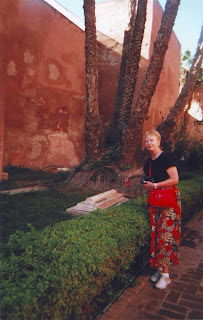 It's time I thought more about visuals. This blog is not keeping up with the herd. So here are a couple of photos related to the genealogist's favourite relaxing pastime: cemetery browsing.

This is inside the grounds of the Bahia Palace in Marrakesh, one of the four royal cities of Morocco. The royals allowed their loyal servants to be buried in the grounds, although this particular dynasty themselves are buried in a mosque.

Infidels are not allowed into mosques, except for the spectacular Hassan II Mosque in Casablanca. When I was there, we couldn't enter because it was the first day after Ramadan and the mosque was crowded with the faithful at prayer. Hassan II is the second largest mosque in the world after the one in Mecca. Its setting is spectacular on the gorgeous Atlantic coastline.

This "gem" of a gravesite is only one of many, many artistic and creative personal burial markers in Novodevichy Cemetery in Moscow. Some are sculptures of the dearly departed; some are symbolic representations of their status or claim to fame in life. There are many notables from different walks of life. In fact, Soviet leaders who were buried in the Kremlin will be reinterred here. Kruschev already lies in Novodevichy, since he died out of office. Raisa Gorbachev's grave was smothered with flowers.

The place is incredibly beautiful ... with narrow paths, tidy but not manicured, and one eyecatching monument after another. The cemetery adjoins a 17th century convent where aristocrats sent their troublesome wives. The convent in turn overlooks Swan Lake, said to be Tschaikovsky's inspiration. More to come on this subject, to be sure! The gem, of course, is Baltic amber.