This is my lovely-looking petite great-grandmother Catherine Fraser, known as Kate to her husband. Not sure yet, but I may be facing several Fraser lines of descendancy 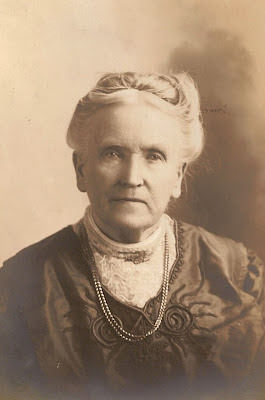 Catherine was born 29 December 1833, daughter of John Fraser and his wife Nancy Fraser at St. Andrews East.(1) She married Peter Dougall there in March 1852.(2) The fact that Nancy was also a Fraser was reinforced by the marriage bond of Catherine’s parents in 1832, so I had two different "lines" to deal with.(3) A local history gave some lore about many Fraser families, but even along with church registers and census returns, not enough to figure them all out.(4) The parents John and Nancy Fraser do not appear in the local burial register or St. Andrews East Protestant Cemetery, so I didn’t know when they died.

Catherine’s mother Nancy (short for the formal Ann) Fraser had a father called John Fraser, who was my Catherine’s maternal grandfather.(5) By eliminating another early John Fraser in the St. Andrews area, who came from Banffshire in Scotland, Nancy’s father John was most likely from Inverness-shire. His second marriage is documented in Montreal,(6) and his first marriage in Inverness has narrowed to two 'candidates.' The wife of one of them is yet another Fraser! The Inverness region was liberally populated with Frasers in the eighteenth century, and his ancestry is unresolved for the time being.

The man from Banff could be credibly eliminated as Catherine’s father John Fraser. All we knew about her father was that he was a blacksmith and he died some time after the 1842 census and before the 1851 census. Again, no burial information from St. Andrews Cemetery. There the research had stalled and been put aside. Then I had one of my few serendipitous discoveries thanks to volunteers who abstract newspaper notices:

Bingo! Three relationships mentioned in one source! Nancy’s identification as the widow of John Fraser and the mother of Mrs. P. Dougall (Catherine) was happy news. Even more intriguing was the reference to a Dr. William Fraser of Montreal. By tracing this medical man, the sibling of Catherine’s father, I was able to establish their roots in Killin, Perthshire, Scotland, for another two generations. Dr. Fraser will have his moment here another day. But I still wonder what happened to his brother John, my great-great-grandfather.