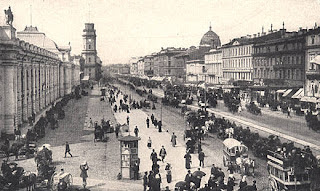 St. Petersburg before the turn of the twentieth century was one of the greatest cities (THE greatest in some opinions) of Europe. It was a magnet for European intellectuals and artists and bons vivants. That’s where grandma Marija Jurikas headed to find gainful employment and perhaps adventure. She might demur if I described her as a small, stubborn woman. But when middle class women were supposed to stay at home, marry well, and demonstrate domestic virtues, Marija left the family home in rural Latvia with her skills and a longing to see and be part of something new.

In 2006 I saw where Marija lived in St. Petersburg. She was employed by Baron Kusov as the family seamstress and dressmaker.A 1910 city directory described Vladimir Alexeyevich Kusov as a state councillor, a technical director of the Mariinsky Theatre, treasurer of the Emperor’s Russian theatre society, and a sponsor of St. Alexander Nevsky church. His mansion is on the boulevard embankment of the Neva River on Vasilievsky Island. Marija designed and made the fashionable dresses for Kusov’s wife and daughters. With a seat at the head butler’s table for meals, she had high ranking in the domestic pecking order.

A short carriage ride would take Marija to the Mariinsky for some of the continent’s most exciting operas and ballets. All of Kusov’s household were able to take advantage of regular seating in the famed, fairytale theatre because of his position there. The Mariinsky was built in 1860 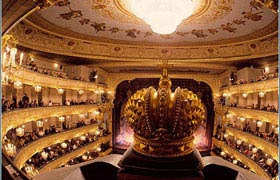 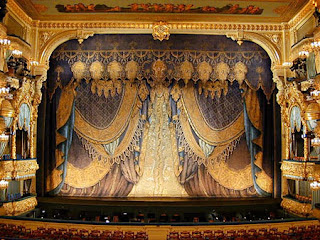 It's interesting to know that I had such a crafty ancestor, thanks for writing this! Is this where the 'Marie' in Belle-Marie came from?

You betcha, Cathy. You've got the same travel gene. And facility with languages.

What an interesting post, Brenda. And what an exciting time she must have had in St Petersburg. Canada must have seemed a cultural backwater, but it sounds as if she made the best of it.