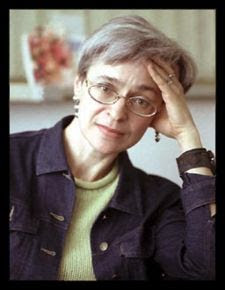 I’ve been tagged? By the “161 meme” book doojiggy. My colleague Steve (www.stephendanko.com) did it. The idea is to get friends and colleagues to respond with the 6th sentence on page 161 of the current book they are reading. A little explanation usually helps! By the time I caught up to Steve’s message, it fit nicely with my toying around for a blog article on the kinds of non-trade literature genealogists like to read, especially novels. While I also have two or three books on the go at once, I chose A Russian Diary by Anna Politkovskaya.

Page 161, sentence 6: “They say it is a small victory for us.” This is a quote from government apologist Ella Pamfilova in September 2004, Chairperson of Putin’s (then) newly created Presidential Commission on Human Rights. Ella sees it as a another victory for “the benign nature and democratic credentials” of Vladimir Putin. She reports support from all regions for this move. Cynical journalist Anna sees the commission as an action to control the human rights movement in Russia, which Putin considers his real opposition. Putin had already marginalized political opposition in elections by restricting the registration of other parties and removing the people’s right to vote for individual candidates. An outspoken advocate for democracy and human rights, Anna was murdered in the stairwell of her Moscow apartment building in 2006. Her friend Alexander Litvinenko, a former FSB agent in exile in London who had urged her to flee death threats in Russia, accused the FSB of assassination. Anna was one of several free-speaking Russian journalists who have been mysteriously killed. Not long after, Litvinenko himself died from radiation poisoning placed in his teacup.

Now I wonder what these people are reading: AWCH, CDM, John Reid, Mary Anne, and Elayne. You know who you are. Just send your comment here.
Posted by BDM at 11:35

Ball of Fire: The Tumultuous Life and Comic Art of Lucille Ball by Stefan Kanfer. Page 161, sentence 6: "Bacon heard the mother chortle that her baby's nose was 'turned up so much he'll drown if it rains--oh, Desi will be so happy.'" This describes the birth of Lucy and Desi's second child, a son named after his father. A daughter, named after Lucy, had been born to the couple two years before. Bacon, who heard the mother chortle, was an AP reporter who witnessed Desi Jr's birth. Sadly, Lucy and Desi had an unhappy marriage. It took many years for them to have children because Desi was so often away.

At the same time as I've been reading this biography, I've been watching tapes of old I Love Lucy shows. I haven't laughed so hard since my comedian friend died of breast cancer a year ago.

"Perhaps if Maude were allowed to visit him by herself, she would fill him with strength, whereas his parents filled him with anxiety and shame." That's the designated sentence in Arthur & George by Julian Barnes, one of the books I have on the go. Arthur is (Sir) Arthur Conan Doyle; George is George Edalji who served three years for a crime he didn't commit.

I'd previously read Barnes' History of the World in 10 1/2 Chapters as well as several of his magazine pieces. The book was given me by a 96 year old lady who has not spent all those years on earth without learning to pick a good book. She also gave me an interesting genealogy puzzle, her paternal line of Temple that goes back to Norfolk, my home county in England, and according to oral tradition links to one of the two people by that name who signed Charles I's death warrant. I'm making very slow progress on the genealogy, but to compensate progress on the book is similarly glacial.

"They say it will rain this week. Hard to believe, isn't it?". Line 6, p. 161, The Kite Runner by Khaled Hosseini. An attempt by General Taheri to use casual conversation to re-direct Amir, the young refugee from Afghanistan, from his conversation with Taheri's daughter. The story is very poignant and relevant to today's events.