Introducing Marija Jurikas (26 November 2007) means .. yes .. I have a totally different Latvian family line. Some tales have appeared here about the Lutheran Freibergs. It’s hard for me to grasp the multiple historical influences on this small country. Through invasion and war over centuries, the Germans and the Russians deeply affected the indigenous population. Force and fear were routinely employed by both at times. Ultimately, and this is purely my own interpretation, German culture and values were more attractive than Russian. Germany of course was a wellspring of religious Protestantism. Latvia became predominantly Lutheran. Germanic people became the elite class of merchants and governing officials, even if it made for uneasy relationships, sharing limited power under Russian rule. They and their descendants were the main owners of large landed estates, or manors. Their descendants consider themselves wholly Latvian. But the status in the old days was clear: Latvian peasants were kept in the underclass. And yet, there were always those who resisted the strictures that kept them in place. 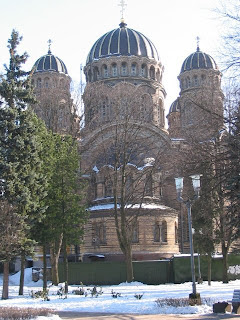 The Jurikas family also butted up against the authorities, but earlier than Otto Freibergs of the 1905 revolution. Families would apparently do what they could for survival and self-respect. Back in about the 1830s, Juris (George in English) Jurikas was said to be of Estonian origin, living in Latvia as a tenant farmer. It’s unclear where this estate he worked on was located, but presumably within some kind of reasonable distance from Estonia. The estate owner ordered the men of his village to build a Lutheran church. Juris refused to work for no pay and encouraged his neighbours to object. For this offence he was sentenced to a public whipping (a commonly favoured punishment for ‘misdemeanours’) but managed to evade the sentence by slipping away to Riga. He joined the Russian Orthodox church, perhaps out of defiance, which gave him some kind of sanction. It is said his original punishment was revoked but instead he was evicted from the property he farmed.

The Russian Orthodox Cathedral in Riga (photo) was not built until the 1870s so was not the exact church where Juris converted. 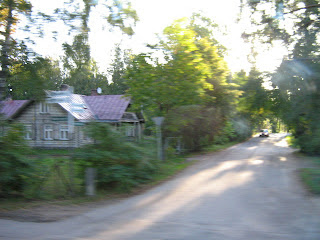 With some savings, Juris was able to secure a farm near Limbazi in the Livonia, or Vidzeme, region. We don’t know if his second farm was in the same general region as the first. Certainly it would not have been on the same landlord’s estate! The story is that only some rough, uncultivated countryside was available to him. He named his farm Krumini, meaning “bushes,” alluding wryly to the dismal condition of the land. All of the above is family hearsay, as yet. It’s likely that more years of hard work were necessary to clear the land and establish some family comfort. We do know that the land was part of the Ladenhof estate. The Germanic name Ladenhof is translated as Lade in Latvian.

This imperfect photo, taken from the bus window as we sped north along the Baltic coast, shows a typical countryside izba, much like that of the Jurikas home. I was able to snap it near the crossroad leading to Limbazi.

The name of Juris’ wife is not known. He may have married before he appeared in Lade parish, as the name Jurikas does not seem to appear in the registers of the Limbazi-Lemsal Alexander Nevsky Orthodox church before 1856. His wife was said to possess healing powers for sick animals and was called upon to help neighbours in this way. It is unknown when Juris died, although it is said he lived to a fine old age assisted by a daily quart of whiskey. I have a report of a marriage at the Limbazi-Lemsal church for Ivan Juriyev (John, son of George) Jurikas of the Schloss Lemsal estate, a widower aged 67, on 4 November 1856 to widow Maria Jacobova Kruklin. The translation from Russian is still in question. Since this man was born about 1789, his father Juris/George is clearly not the man under discussion. It would make sense if the bridegroom’s name was Juris or Georgiy, making this a second marriage for the aging Juris. But “Ivan” is quite evident on the record. Still, clergymen have been known to make errors!

The family ties with the Russian Orthodox church were to serve them well in succeeding generations. To be continued.
Posted by BDM at 11:26

This is a very interesting story, Brenda. I look forward to reading more about your Latvian ancestors.

When I first saw your "imperfect photo" I thought that you had purposely manipulated the photo for artistic effect! As it is, the photo has an ethereal quality to it.

Daughter of Jüri and Marri
Sister of Jürri, Tõnis, Mihkel and Johann
if y feel I´m close y can see me whole family trees
The family come from Estonia at the boarder 2 Latvija
love mitzi

Hi Mitzi:
Thank you for your comment! I'm aware of Dr. Ernest Jurikas in the 1940 census. I feel there must be some connection, back in the 19th century. Jurikas is not a very common surname, is it? What do you know about the parents and grandparents of Ernest?

We could exchange more information, but I don't know how to access your family tree ... I am not a member of geni.com. Reach me at brendadougallmerriman@gmail.com.