Back in the early 1980s I experimented with matrilineal genealogy charting. It was not prompted by any overt feminist ploy, but from wanting to play around with the traditionally male-dominated family pedigree charts. It wasn’t easy. We genealogists know it’s harder to find out about female ancestors. Of course each woman has a mother-based descent shared with her siblings. But when you play around with matrilineal lines of yourself or your cousins, mutual family ancestry veers off into fascinating tangents just as valid as your birth surname lineage. This view of ancestry has received a little more attention since Mitochondrial-DNA studies came into focus the last few years.

When I first began with this idea I wanted to show the female Scottish connections which I had traced for several generations. The idea instantly clashed with my maternal ancestry which goes entirely Latvian. And so does that of my daughter, because of me. And so does that of her daughter, because of her. Thinking out loud here for fun (allowing for my defective gene in mathematical skills) I am 50% Latvian, my daughter is 25% and my granddaughter 12½%. Of course the percentages get diluted as time goes on, but the connection is always there. My few maternal female cousins have Latvian mothers and grandmothers and so on, unrelated to my lines. It seems I have no maternal Scottish connections.

Not to be defeated at the outset for this vision of the Scottish female forebears, I used my paternal cousin’s granddaughter as the bottom line. Paternal cousin and her offspring have the Scottish maternal lines I lack. (My heritage too, I claim!) This later led to making a chart that ascends from my own granddaughter. I had to cull everything I knew, and am still learning, about my Latvian grand-mères. 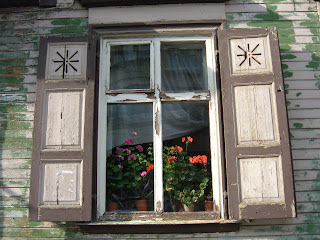 The photograph is entirely gratuitous! ... one of the old wooden houses in the city of Riga, October 2006 by BDM. No grandmother peeking out of the window there. Must take more photographs. Must remember to cite photographs and maps found on the Internet!

Investigating maternal lines is a slightly different way to look at genealogy and family history. Each spouse along the way of direct-line surname tracing, often ignored in traditional context, contributes not only to the unbroken inheritance of MtDNA in women but also to how many genes or characteristics the latest baby may display. Percentages and DNA aside, we should never underestimate the value of matrilineal heritage in family history.
Posted by BDM at 09:49