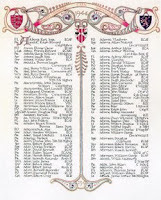 Take a peek at my books down in the right column. Two new editions are the products of Brenda’s last twelve months in researching, revising, writing, being reviewed, consulting, more research, more re-writing, printing glitches and occasional suicidal thoughts. That was me about March belting out “I Will Survive” as a theme song. It’s been 24 years since the first edition of Genealogy in Ontario appeared. Here are a couple of illustrations that didn’t make it into the book. 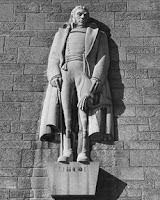 The Books of Remembrance for Canadian military service are in Ottawa but can be viewed on the Veterans Affairs Canada website: www.vac-acc.gc.ca, "Canada Remembers." The statue of Governor Simcoe is at Queen's Park in Toronto.

About Genealogical Standards of Evidence (3rd ed.) has also been revised to reflect mainstream twenty-first century methodology. Now I’m free to sort out priorities for my next projects.

This past weekend, 30 May to 1 June, was the Ontario Genealogical Society’s annual Conference (as it happens, the biggest such event in Canada). I was there on Saturday afternoon to sign books at the OGS table in the Marketplace of vendors, exhibits and regional information centres. A great chance to catch up with old friends, new friends and all the books. OGS had an attendance near 700 which is amazing, considering the downturn in registration the last few years for most North American conferences. Smart publicity contributed, and the theme “Wired Genealogy” clearly resonated with the general public. Dennis Mulligan must be a happy man.

The Ontario Chapter, Association of Professional Genealogists, had a table to promote membership and individual services; I could only spend a short time there. 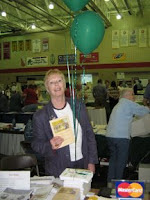 OCAPG member Ruth Blair was energetically doing double duty at times, with the National Institute for Genealogical Studies located at the next tables. At the end of this month my official position with NIGS comes to an end after six years. OCAPG member Nancy Trimble’s election as OGS vice president was good news; her broken leg was not so good news, but with her motorcycle ambitions curtailed, we know that matters genealogical have her undivided attention, eh? Paul McGrath at the “Ancestors in the Attic” display discussed the wrap-up of the third series and the preparation for a fourth with fingers crossed. Unfortunately I missed Dick Eastman, John Reid and many other people.

Speaking of endings, beginnings and good theme songs, Maclean’s magazine tells me that disco is back. Not that I knew it went missing, but it’s reassuring to know that good things get re-cycled without my help. Now all the secret wannabe Y!M!C!A! impersonators can safely reappear. Much more fun than rehearsing the steps to Zjozzy’s Funk in my sleep. Welcome back, Gloria Gaynor.
Posted by BDM at 10:32

Congratulations Brenda on the release of your two updated books. I was glad to see you at the OGS conference.

I noticed the sentence "At the end of this month my official position with NIGS comes to an end after six years" was inobtrusively slipped into this post.

I'm sorry to hear you'll be leaving your official position with NIGS. You've been a great inspiration to me. Does this mean you'll still have an "unofficial" position there?

Your latest edition of Genealogy in Ontario: Searching the Records has some wonderful additions and improvements; I love the cover image too. Congratulations!--CDM