Sombreros off to our Mexican friends who celebrate Cinco de Mayo today. On 5 May 1862 the poorly equipped army of General Ignacio Zaragoza, outnumbered almost 2 to 1, defeated invading French forces at the battle of Puebla. The victory created a great surge of national unity that lives on in the collective memory, although the French subsequently prevailed with Louis Napoleon installing Maximilian of Hapsburg as emperor. 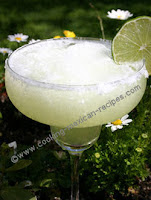 While the Fifth of May is not their Independence Day (16 September is) it's a good excuse for parties. Mexican culture is celebrated around the country, with pride of place in the city of Puebla. Ironically, it is said the biggest Cinco de Mayo celebration is in Los Angeles, USA.

Doesn't that margarita blend nicely with my blog?
Posted by BDM at 22:31