Work on my McFadyen family has revived, but as with other branches of my family history, it proceeds at caterpillar speed. Before I winged off into genealogy, family knowledge about McFadyens was pretty well limited to their more recent days in Manitoba. My initial attempts to pinpoint where in Nova Scotia they had settled seemed impossible. In those early days, dearest Auntie B (featured in “Who’s For Dinner?” 12 February 2008 blog) was my sole and desperate source of potential information. After all, she was the only remaining family member with hands-on experience of her granny, the dread Isabella Campbell McFadyen. The best Auntie B could do was “Well, dear,” with a deep sigh indicating her intense effort to recall, “the place seemed to end in an ish.”

Ish? The best known ish is Antigonish on mainland Nova Scotia. It took me months of correspondence with city officials before discounting it as one of my ancestral homes. The Neil McFadyen who was executed for murder and buried on the beach there in 1848 was secretly exciting but certainly not one of my relatives. We don’t have Neils in our family ... what other reason did I need for discounting him? Folks, these were the dark ages of my personal investigation skills. Now of course it would be gratifying to find even a mild black sheep.

Then came the time for a family trip to the Maritimes and look, the map shows an Ingonish on Cape Breton! 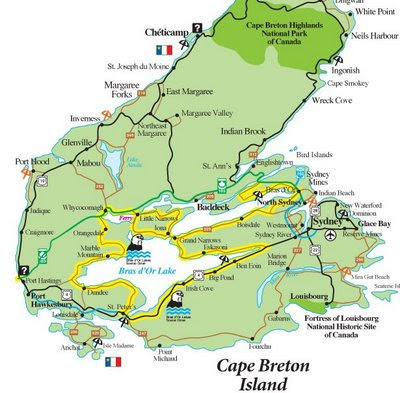 See? There’s Ingonish way up there on the northeast coast with a tiny umbrella.

Map from Listings Canada, http://listingsca.com/Nova-Scotia/cbmap.asp.
Looked good to me until we got there when local lore disavowed any McFadyens in the area. Ever. I was learning to trust that these “Capers” have long race memory, inherited from their Scottish homeland.

Ish was not to be. But I’m still grateful that Auntie B tried. As it turned out later, Inverness County south of Bras d'Or Lake was the actual area. Perhaps Auntie B heard Isabella pronouncing Inverness when her false teeth were removed, as was her custom any time of day. Another fascinating Isabella habit.

Later, quite a bit later, J.L. McDougall’s compiled History of Inverness County, Nova Scotia would provide me with an introduction to Donald McFadyen the soldier and open doors to his family history.
Posted by BDM at 19:25

If I could pick an additional home for one of my ancestors (just so I could have the fun of researching the place), it would be Cape Breton.

Hope you have continued success in finding your family history there!