I don’t know about you, but I need a regular camel fix, and it’s been a while. The biggest decision is which one in my growing photo collection to feature each time. There is the close-up of Zou-Zou my runaway camel, but that’s a whole story in itself. A certain cartoon I will save. And a friend sent me her photo of a very unusual baby, which really needs special background information if only I could read Arabic because English websites are not giving it up. 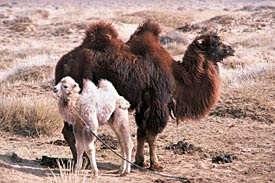 Mongolia is a hotspot for camels of the Bactrian variety. It’s also home to a large part of the Gobi Desert which explains a lot. Before people started mass printing of dumb slogans on T-shirts we used to have a joke about the Gobi Desert Canoe Club. Mongolians are probably still more traditionally tied to a nomadic life than their Bedouin counterparts in the Middle East. Camels are like their staff of life, a multi-tasking beast for transport, food, wool, leather and fuel (dried dung, for those of you have never crossed a cow pasture in the fall). There are deserts and then there are deserts. The Gobi can get very cold in winter. 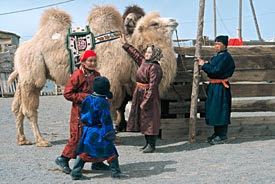 The wild camel population in the Gobi diminished considerably during the last twenty-five years or so for various reasons—political mismanagement, demand for meat, parasites (I know, the last two do not sit well together). Finally a Wild Camel Protection Foundation was formed to establish protected areas and breeding programs. Thankfully the distinguished patrons are holding up their end with impressive contributions in GBP, since I don't seem to have much in the way of £ lying around.

Brenda has not been to Mongolia to investigate this situation. Yet. But I have a connection. 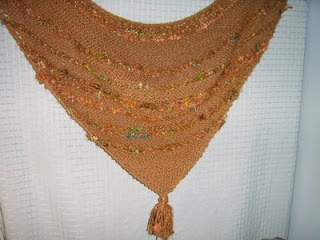 My daughter the yarn craft merchant was able to obtain “100% Mongolian camel down” through co-ops and agencies who market developing-world crafts ... so clever she is. The name of the wool spinner is right there. Daughter knew I needed a shawl in the office for winter chill and went to work on it. She added her own bits for colour. Some gifts are warm and priceless.

It's interesting to note that the colourful bits are hand-spun, like the camel yarn. The camel was hand-spun on that ancient technology, the drop spindle. The colourful mixed-fibre art yarn was spun by an American rock & roll fibre artist who had to re-adapt her method of using her spinning wheel after she lost an arm and a leg in a car accident.