The 5th edition of the Canadian Genealogy Carnival is all about favourite Canadian vacations. Where did your ancestors like to spend their summer holidays? Did your family enjoy a favourite beach or cottage? Or did your family travel from sea to shining sea? Photographs of these holiday places is encouraged.

When I was a kid, every summer was the favourite vacation. That’s because we left the city behind and drove fifteen miles to our camp for two months. In Northwestern Ontario what we call camps, you call cottages or cabins. Imagine driving only ten or fifteen miles to be in the bush on a lake. However, I’m speaking of a camp on the greatest lake of all, Lake Superior. Amethyst Harbour was the most magical of places for kids.

Our first camp was old before my parents bought it, before the Second World War! It had four bedrooms, a massive iron cook stove and no indoor plumbing. But we never spent much time inside. If we were lucky, the kids had the option of sleeping in a tent in the back yard. Our parents probably thought we actually slept! One night my dad’s friend, a few sheets to the wind as we used to say, broke his ankle tripping over our chamber pot.

The campers’ association hired a summer instructor for swimming, tennis, badminton and baseball. In fact, baseball became a highly competitive sport among teams along the shore. We had regular hikes to nearby areas for picnics and games ... McKenzie pool, McKenzie Falls and Wabang ... Run sheep run! Bonfires and wiener roasts were special events for staying up late. Evening fishing was usually a family event: you would see all the motor boats leaving their docks for the open water to slowly troll for trout. You could wave at your friends but you were supposed to be quiet and not scare the fish away. In those days, 30-pound lake trout were not uncommon. 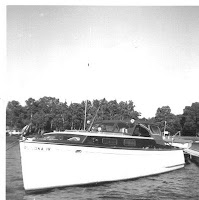 Every year included a trip in the big boat to Nipigon Bay for the “world famous” Rossport Fish Derby. Being allowed to steer the boat and learn the charts were highlights, although you paid for it by swabbing the decks and polishing chrome.

Otherwise, kids were allowed to run mostly wild and barefoot. We knew every inch of the territory ... the beaches, the cliffs, the old amethyst mines and the surrounding forest. Every age group had a gang and a gaggle of bicycles for the fastest route between points A and B. We would take sleeping bags to deserted Lambert Island, watching incredible shooting stars and aurora borealis all night. We became proficient with our ever-present boats, sometimes venturing across Thunder Bay to lonely Caribou Island. Once, one of those unexpected Lake Superior storms came up before the boats could return. Terrified parents launched their bigger boats for search and rescue but all ended well. Those young lads knew their boats, alright, and they knew Lake Superior. To us, it was just part of the ever-exciting summer adventure.

We built a new camp with mod cons. As kids got older, cars began to replace the bicycles. Nevertheless, no matter what age we were, no-one wanted to miss the annual long-weekend sports days. Now, there are fifth and sixth generation campers returning each summer. Tuska the ancient fisherman is long gone. Lambert Island is populated. But Lake Superior never loses its seductive power and Amethyst Harbour retains its magic for every new generation of kids.

Brenda, thanks for sharing your summer vacation memories and photos.

The first time I heard the word camp for cottage I was quite surprised that people were actually talking about their cottages.

Greetings Brenda,
Thanks for sharing your memories of your camp for this edition of the CGC. Amethyst Harbour sounds like a wonderful place to spend a holiday.
Kathryn