Luckily I inherited oodles of old family photographs. Some of them have notes on the back to say who they are. Some of them don’t, and we all know how bad that is. A lot of them were identified for me by parents or grandparents. But a few ancestral lines apparently avoided the photographer as much as they shied away from other kinds of informative records. 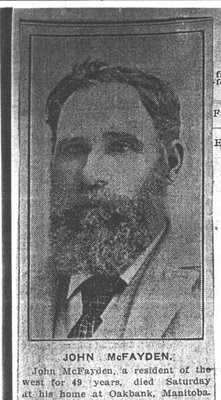 This is John McFadyen, my great-grandfather. I know it’s him because it says so right there in the newspaper—even though his name in the caption is McFayden. That’s a common alternate spelling although the pronunciation, to me, seems quite different. The clipping was sent to me ages ago by a well-meaning relative (and I thank you again!) but the newspaper was un-named. A Winnipeg paper was a good bet but how could I cite it? Then I splurged for a subscription to Newspaper Archive <http://www.newspaperarchive.com> because I knew they had Manitoba newspapers extending back into the nineteenth century. When you copy an article into your word-processing program, the OCR (optical character recognition) makes for some amusing “translation.”

John Hector McFadyen was born in Cape Breton in March of 1838, if we believe the 1911 census, and died 31 July 1915 at Oakbank, Manitoba. He came from a family of twelve children born to Hector McFadyen and his wife Jessie McKenzie of River Denys, Cape Breton. “John Hector” distinguished him from his slightly younger brother John Jr. aka “John Lauchlin,” not to be confused with their brother Lauchlin! (Highlanders had their reasons for same names in one family, obscure as they may be to us). Since most of the brothers were seamen, including my John, it’s something of a miracle he made it all the way to Manitoba to become a homestead farmer. Two other brothers drowned on the Grand Banks after he left. John sailed his own boat to Provincetown, Massachusetts, where he married and the first two children came along. By 1874 he was established on a quarter section of rich Manitoba soil at Oakbank, in what would become the Municipality of Springfield.

The two brothers called John, both long removed from the old family base in Cape Breton, were sometimes merged in reminiscences of the next generations. John Lauchie had apparently been smitten with gold fever and rarely visited home again, travelling to many foreign places. He did write letters, some saved by descendants of his youngest sister. And he probably sent photographs, now lost or unidentified. His last letter to Cape Breton came from Singapore on the Malay Peninsula, thus it was assumed he died there, although Sumatra was also mentioned.

John Hector’s obituary says he was survived by all ten children, five sons and five daughters. Little did they know that his youngest son Willie would die a year later in France with the 1st Canadian Mounted Rifles. His son Bob would die five years later in a house fire at Oakbank. That left three sons, none of whom had children—my McFadyen line “daughtered out” as we say. A couple of the surviving sons show promise of real live family black sheep (.. goody ..) for future posts.

I treasure that clipping—the ONLY picture I have of him. Someone, somewhere, once had the original photo. One of the daughters, no doubt.
Posted by BDM at 21:49

That's great that you could verify where the picture of John was published. I know what you mean about treasuring picture(s).. thankfully scanners and imaging software can help us clean them up, enlarge, and store them for the future :) --Carolyn

Actually, one of my terrific correspondents with mutual Cape Breton interests sent me the identified newspaper page several months ago. In my tunnel vision, I neglected this. Thank you again, Cheryl!