Comparing signatures to help identify ancestors is an interesting technique for family historians when faced with two or more ancestors bearing the same name. Obviously, one must have some existing documentation to enable such an evaluation. And even if a signature match looks good, it’s not strong enough evidence to stand alone, for sure.

I’m requesting assistance (issuing a challenge?) for some sharp eyes and/or students of paleography. First, the background.

George Porter was active in the town of York (later Toronto) and Newark (Niagara-on-the-Lake) between 1792 and 1799. He was the only George Porter around in those earliest days of Upper Canada (Ontario). He married, had four children, and disappeared without leaving any recorded trace of such events. What we do have are the numerous petitions he made to government authorities in order to acquire land in the developing province. And some bare-bones population lists for York.

George was self-described as a former sergeant of militia and a carpenter. Unhappily for us, no-one recorded where the militia service occurred. Because he first appeared on the Niagara peninsula, a logical suspicion is that he crossed over from New York State. That leaves his prior origins open to several eastern U.S. states or even beyond. He never claimed to be a Loyalist which is “negative information” and helpful in its own way. The timing in 1792 coincides with Lieutenant Governor Simcoe’s appeal to Americans to come and settle on free land in Upper Canada.

Two of George’s sons were named David and Augustus. It’s very tempting to connect George to Porter descendants of a Connecticut family where the same forenames occur. Tempting, but George does not seem to slot nicely into that family’s framework. This, despite the fact that an Augustus Porter was his contemporary, a surveyor who worked for the Holland Land Company at one time, and became a prosperous pioneer along the American side of the Niagara River.

When George disappeared by 1800 from the town of York (and everywhere else inasmuch as current searching ascertains), he left a wife and three surviving children. There’s a good deal of mystery about the wife/widow which is a whole ’nother story. The Porter children are largely unaccounted for until they began marrying in York from 1816 onward. 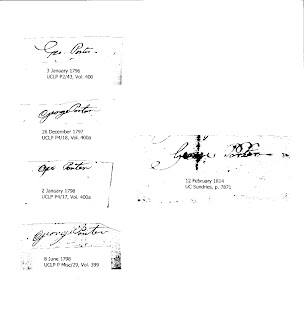 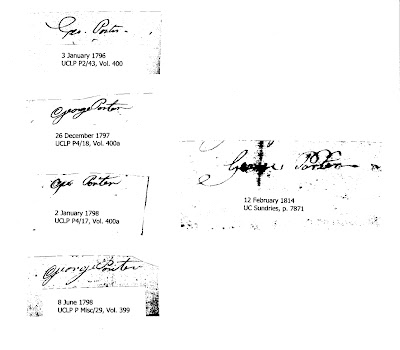 The signatures on the left were made by our George Porter on his various land petitions at Newark or York. The signature on the right was made by a man who “appeared” in the London District, fourteen years after George disappeared. Could George in 1814 be the same man? I’m conflicted. Tell me what you think about the signatures.

The context for the man of 1814 does him little credit. He was in jail for illegal possession of cattle and horses, taken from some Indians during General Procter’s 1813 retreat from the invading Americans. It was all a misunderstanding, George said, and au contraire, he was saving the livestock from the enemy. He rambled on about the Indian who “gave” him the animals—a man who had deserted his family—how he, George, had been assisting impoverished Indians, how he could even reclaim some government cattle from among them, and would like to join the government’s Indian Department. George was doing his level best for a get-out-of-jail-free card.

Despite the poor condition of the document, a few names were decipherable that looked like clues for further research. But his reference to the commander of the 26th regiment—to whom he had allegedly been recommended for a civilian job—was very strange. The 26th regiment was nowhere near Upper Canada during the War of 1812 from everything I can gather!

Digging into abstruse records with potential genealogical value continues. The Upper Canada Sundries consist of correspondence received by the province’s Civil Secretary. One hopes to find outgoing correspondence relating to this case. If only the Archives of Ontario would find the missing papers of General Drummond, administrator of Upper Canada in that period! This case is not over yet.

I vote no. I'm no expert but I think the G's are are too dissimilar.

Brenda, I would have to say yes. The reason for this is the P in the right side signature is very similar to the 1st signature on left. Also, the entire last name is a close match to the 2nd signature on left. If you look at the motion of the pen in all signatures you will see the same motion. OK that's my less than expert opinion. And hey, he wouldn't be the 1st man to walk out on his wife!

Thanks, both! I'm still on the fence myself. A couple of FB replies are on the NO side. Clearly I need to explore the few other clues.

I'm still trying to unravel a family mystery I've been working on for 25 yrs. Hopefully this one doesn't take you that long.
FYI it's an adoption back in the day 1895 when there were no records AND just to add a little more interest, the mother may have been one of Miss Rye's girl's. Not much in the way of substantiated confirmation. But still hanging in there.

Hmm, really hard one, Brenda! I think that I would err to the side of NO. I'm not an expert either, but when a person changes the 1st letter of their first name, I have rarely seen a return to the earlier one, especially if the later one is more embellished. [ego rarely backtracks!]. and this last signature has both a return to a simpler first initial and a more embellished first last initial. I'd keep info,just in case, but keep looking for other documents in that big gap of time.....

Thanks very much, Sue. Ah yes .. that "big gap of time." So few records, so many questions! That first initial on George is indeed an obstacle to merging their identities.