At last, my goal in Edinburgh. The Historical Research Room, part of the National Archives of Scotland. The morning walk took less than my estimated ten minutes ... if you disregard the fact that I first went to General Register House instead of to the Garden Entrance for the search rooms, which information I had read several times in advance and apparently forgot in the majesty of it all. I was greeted kindly and  registered with a temporary pass to access the locker room. The same reception person was equally kind in issuing me with a one-pound coin for the locker in exchange for the strange, useless shrapnel in my purse. 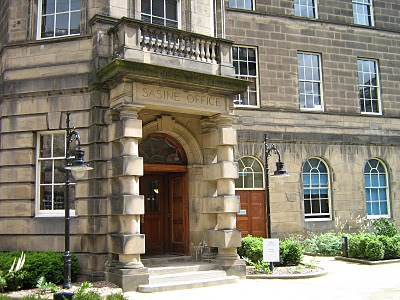 By the time I got upstairs—lots of stairs, these are high buildings—my official reader’s ticket magically appeared when another reception person examined my confirmation order for manuscript materials. She then waved me off to the Hysterical Search Room without a road map. I saw some signage for a while, but managed to lose myself briefly in a few dead-end cubby holes and the other reading room occupied by legal types. Or maybe that was on one of my trips back and forth.

Not many people were in the appointed stately room at that hour, but they were intent on what they were doing (because they knew what they were doing). An archivist assigned me to table 22. There were three archivists or facsimiles most of the time, each of whom had different functions I began to realize. The one in charge of document retrieval produced my documents in snappy fashion.

There I was, staring at fragile 200-year old papers folded into that stiff state that every historian fears will disintegrate at the first touch. Approaching the archivist who brought me the material, I asked, “Do you have gloves for handling?” He demurred, “We don’t normally use them.” I tried to hide my surprise (and terror, if chunks of irreplaceable history are going to fall on MY designated table spot). At least I was not having a language/accent problem.

After something like four hours in one very large batch of negative searches—nevertheless contributing to my hypothesis, mostly demolishing it—I decided to have some copies. To be negotiated with the archivist in charge of copies. The best option was to pay and have them mailed. That means money which was downstairs in my locker because I had diligently observed the pencil-and-paper-only code. When I found the locker again, forgetting to memorize the return trail upstairs, the next event had to be finding a bank machine.

A kindly gentleman in the first receptionist’s lobby, a sort of greeter, was more than pleased to direct me to the adjacent shopping mall which required a circuitous route taking five minutes to explain. They are all so kind. On my way, a few remaining pieces of my annoying shrapnel paid tribute to a piper attracting tourists for photos. 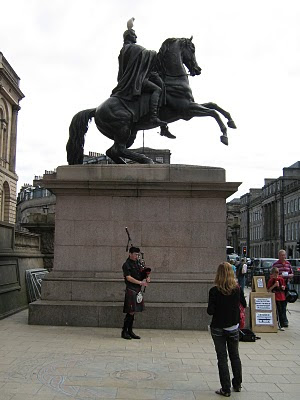 At the end of the day I had satisfactorily pursued the desirable manuscripts and online resources. Various copies to follow. I might add they have not arrived yet, unlike photocopies from the National Library of Scotland which were in my mailbox the day after I returned home. The garden entrance is quite lovely, and I was touched to see the memorial to the Mitchells, many of whose monumental inscriptions—cemetery transcripts in North Americanese—I have hoarded over the years.
The National Library doesn’t mess around; they send first class mail. That said, the NLS receptionist was not as kind as the NAS people. She insisted everything goes in the locker except pencil-and-paper. The librarian in charge of photocopies, though, was sympathetic and friendly and agreed that a purse with all your worldly ID in it was eligible for carrying about, although she didn’t know my purse resembled an overstuffed hiker’s backpack. The Library also has many stairs to climb, which I probably did three or four times. Up and down while waiting for book retrieval (they have many enticing articles for sale in their shop), up and down for photocopy money.

Now I’m thinking I didn’t sign out from the National Library of Scotland. Might they still be looking for me?

Did I mention I was in Edinburgh? Ahhhhh. A great Old Town with, surprise, tons of stairs. We’re talking serious climbing. On my way up and down to the Scottish Genealogy Society I spotted some intriguing restaurants with outdoor terraces—dinner potential. Not wanting to admit I’m a lapsed member of the SGS, at their office I requested certain of their monumental inscriptions publications. The volunteers who maintain the office were almost astounded but joyful when I added I wanted to buy them. Four of us spent an entertaining half hour learning to use their credit card machine. A mutually congratulatory and bonding experience, all in all. The excess weight to my take-home luggage made the airline personnel beam with pleasure. No doubt about it, I was dispensing happiness everywhere I went. 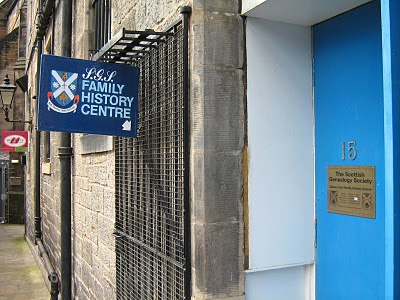 Promises of sin, depravity, and ancient murder mysteries will have to wait for another time. When I stop counting stairs in my sleep.
Posted by BDM at 22:02

What a fantastic experience! I'm hoping to get there one day.

Elizabeth, I'm sure you will love every minute while there.

Well, Brenda, I can most certainly say that I did not know of this blog prior to our conversation earlier. A great read...both your visit to the research library & exploring the Isle of Coll with you, a delightful if vacarious journey. Like your writing style, lady!