Killin sits in the Scottish Highlands of what used to be Perthshire but after a boundary shift, is now in the Stirling Council region. The beautiful back roads feature almost-hidden quaint B&Bs, evidence of the Trossachs’ popularity as a holiday retreat from the major urban areas. This is Rob Roy McGregor country. The village I was expecting turned out to be more like a 21st century town. Note to self: Stop living in the 18th century. Killin now includes the former surrounding villages of Monemore, Ballechroisk, and others. 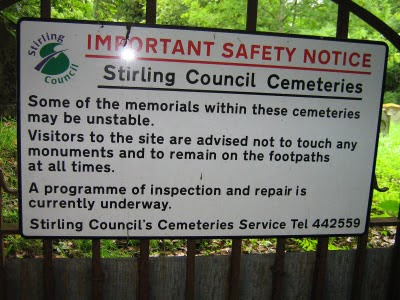 Cousin Lizzie had given very good directions to the old churchyard. Take the path beside and around the back of the hotel which now oddly sits between the church and its burying ground. I already knew that little trace of my Perthshire Frasers awaited. Our mutual gt-gt-gt-grandfather Duncan Fraser lies there (where else would he be?) but no stone is visible. His daughter Janet and her husband seem to be the only sign of several Fraser generations. 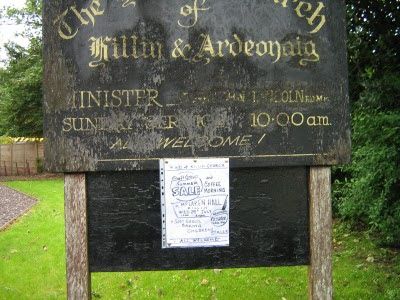 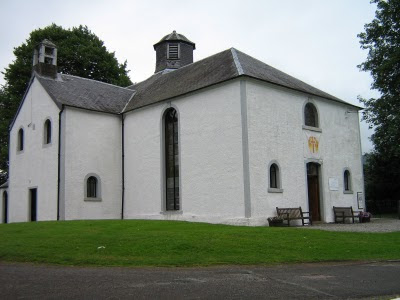 This is the parish church of Killin and Ardeonaig, built in 1744, so one solace was that Duncan was baptized here in 1783, and his father John in 1751. The ruins of the mediaeval church that existed by 1317 are in the midst of the burial ground, no longer visible. 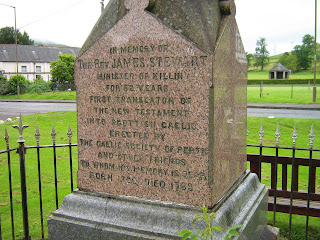 A bonus was the memorial erected to the Reverend James Stewart who would have served at the time of the baptisms. His memorial sits in its own enclosure near the front of the church. Note the tribute to his translation of the Bible into Gaelic: this was a major, major contribution to Highland society. 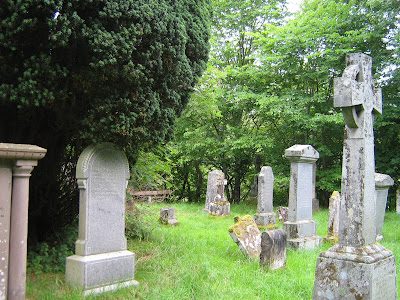 Back to the burial ground: The older stones are so unkempt and uncared-for, enough to make you cry. Mature trees have grown over many, hiding them. Few of the still-standing stones are decipherable. And naturally there could be plenty lying beneath the sod. The "programme of inspection and repair" and even the "footpaths" are not in evidence. 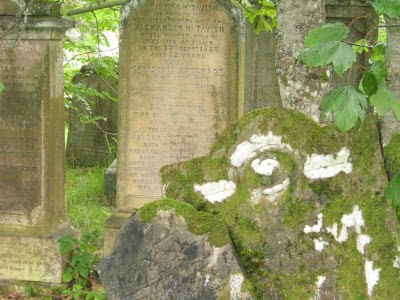 Members of the Scottish Genealogy Society (SGS) transcribed gravestones here in 1965. Their publication, South Perthshire Monumental Inscriptions, does not include the stone of Janet Fraser and her husband Alexander MacFarlane in the Killin cluster of eight burying grounds. Clearly legible now, the omission is puzzling. Was the stone illegible in 1965? Has someone cleaned it since? 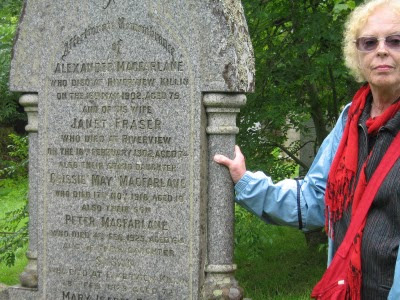 The paucity of Fraser names in the entire SGS publication—flawed as it may be—is startling to me. Here I thought I was at the source of my Perthshire Fraser line. (I have to keep saying “Perthshire Fraser line” because I likely have two Inverness-shire Fraser lines :-) Cousin Lizzie and I don’t know where our Duncan’s probable grandfather, a prior Duncan, came from. The absence of most Highland parish registers before the mid-18th century casts that renowned fine Highland mist over us. 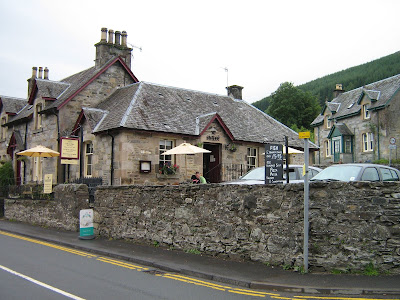 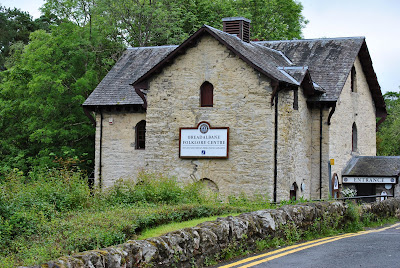 The Breadalbane Folklore Centre is situated in Killin, paying tribute to St. Fillan of Gaelic tales, and to the clans that flourished here—McNab, McGregor, Campbell. A 17th century claymore is among the displays, having been preserved by McGregor descendants. Perhaps a relic once held by Rob Roy himself?

More thinking to do. Why am I getting this sinking feeling that gt-gt-gt-grandad Duncan’s grandfather may have drifted into Killin from Inverness-shire where the Lovat Frasers were concentrated? Lizzie has reached the same hypothesis. He would have been a young and healthy age at the time of the Battle of Culloden. Note to self: Get a grip on your imagination; new Fraser posting needed.
Posted by BDM at 20:07

Hi Brenda ~ I'm SO enjoying your Scotland posts! Makes me long to go back. Even if you don't find ALL the records and gravestones, its just wonderful to be walking were they walked.

Thanks, Diana. I agree, there's nothing like *being* there. It's also wonderful to be wearing sturdy 21st century shoes while doing it, whereas a lot of them often went barefoot a few hundred years ago ;-)