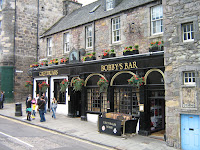 While waiting for retrievals at the National Library in Edinburgh, I scooted outside to practice my photography skills. Note to self: Surely the quantity I take will result in some quality. Two minutes away was one of Edinburgh’s iconic historical sites. The entrance to Greyfriars Church and cemetery is all but unnoticeable except for the landmark pub. 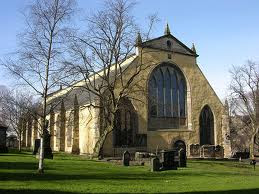 Something about a faithful dog called Bobby rang a faint bell. My ignorance of the history here was excusable, I felt, having no ancestors in the city or surrounding vicinity. Then I learned the full name is Greyfriars Tolbooth and Highland Kirk. That made me feel slightly connected, combined with immense respect for the GREY spelling which I’ve always preferred to GRAY. 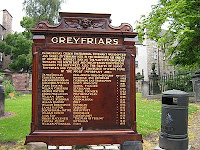 Mary Queen of Scots granted the land as a town burial ground in 1562 at a Franciscan monastery, preceding the kirk itself. From 1682 the church building has been through numerous disasters, changes, and restorations. Now I’ve misplaced my brochure of pathways and monuments so I will have to crib a little from the Internet. It was good to see that Greyfriars Kirk today is an active congregation despite tolerating daily measures of gawking tourists. Thanks to http://www.greyfriarskirk.com for the sign.

Bobby? He was the loyal 19th century terrier who mourned his master’s passing by guarding his best friend’s burial site at Greyfriars for fourteen years. No question, Bobby deserves his own monument. The doggy story has some slight variations in the telling, but Bobby was himself interred just inside the gate, not in the kirkyard per se, himself not having the exact proper credentials. Trying to get a decent shot of his modest statue, uncluttered by sightseers and assorted Edinburgh youth, is nigh impossible. Thus I thank Wikipedia for this photograph. 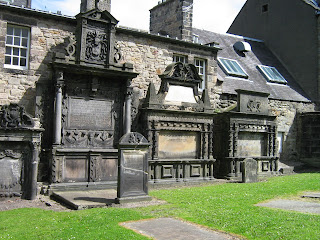 Many luminaries of Edinburgh and Scottish history lie within the grounds ... individual monuments, family sarcophagi. As in most ancient cemeteries, some have weathered badly, others have been sealed to prevent vandalism. One would need intensive study to know who all these people were, many of whom had their moments of fame. Centuries of interments created layers of remains and raised the original ground level. But still, seventeenth and eighteenth century monuments predominate.


Flodden Wall at the edge of the churchyard is a remnant of the fortified wall built around Edinburgh after the famous battle in 1513. Self: I am so into the 16th century now! Instead of acting as a deterrent against the English, it became a barrier for southern expansion of the city’s Old Town, forcing its tenement buildings to rise to notorious heights (the higher the better for the olfactory factor). Again, I am indebted to Edinburgh's Dark Side (see below) for a quality photo which escaped me. 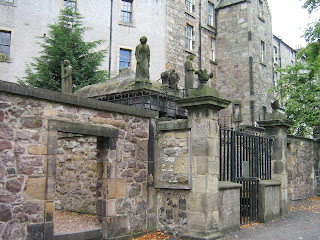 The National Covenant of Scotland was signed in this church to establish the independence of religious rite. The Covenant was not without trouble and setbacks based on the preferences of ensuing rulers. In 1679 about 1,200 Covenanters were imprisoned near the church in dreadful conditions, Lord Advocate George Mackenzie being their most zealous persecutor. Many died and others were tortured or put to death. Although these family plots became known in popular lore as the prison cells, apparently the original imprisonment location was nearby. Mackenzie himself has an impressive tomb here, spawning scores of poltergeist reports. 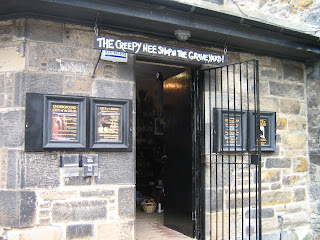 The daytime dignity of Greyfriars has a parallel life. Its history of suffering, executions, body snatchers, grave robbers, and vandalism (disrespect for the dead still occurs today) renders it a genuinely spooky place after dark. This odd little "wee" shop at the entrance caters to paranormal interests, especially Mackenzie’s ghost. "Dead of Night" tours are on offer if you’re willing to risk poltergeist phenomena or strangely unaccountable bruises and scratches. Mind you, assorted nighttime ghost tours all over the Old Town are popular and competitive.

Pretty heady stuff for a break before returning to the library. Somehow, turning in to Bobby’s pub instead would have been more fun. Self: Work a little harder at photographic skills.

A couple of places for some good shivers are Edinburgh’s Dark Side and Greyfriars Graveyard.
Posted by BDM at 22:08

What a lovely tribute ... thank you so much for passing this on to me! I'm delighted to be introduced to your interesting blog.
- Brenda